Earlier this year, also at The Concourse, we saw Melbourne Ballet Company’s Being In Time. The company has returned with Archè, choreographed by Simon Hoy and Timothy Podesta, which follows the basic story of the classic 19th Century ballet Swan Lake and uses some of the glorious Tchaikovsky music, but has streamlined, abridged and contemporarised it for a small cast. It also interpolates references to the Greek myth of Leda and the Swan and the famous Fokine/Pavlova The Dying Swan solo. An eclectic recorded soundscore, which includes music by Elgar, Morricone and Einaudi, is used and there is no real set as such but instead wonderful atmospheric projections (such as a summer garden, the lake on a cloudy stormy night, various palace interiors). 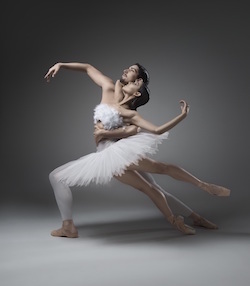 “Arche” is a Greek word implying the beginning, the source from which all things arise. (This led to the development of the idea of the four elements of earth, air, fire and water.) As in the “traditional” Swan Lake, we see a battle between good and evil as symbolised by the use of black and white costumes for the three main characters. (I was not particularly impressed by the fluffy bits on the swan and von Rothbart’s costumes. The flowing shifts in green and yellow for courtiers and princesses were simple and sweet.)

The choreography is at times very demanding and incorporates a number of styles. It is certainly ballet-based and inspired by the Petipa/Ivanov original, with many allusions to the “traditional” work, but there are also hints perhaps of the Mats Ek version and Sir Kenneth Macmillan’s style (especially the difficult lifts in the pas de deux) and a blend of Balanchine and Graham styles. The ensemble work throughout (such as the four swans, the princesses) was terrific, precise and pulsating in unison. For the swans, the movement requires a very flexible back, and for the men in particular, very polished jumps, leaps and turns performed with a pantherine grace. The dancing was technically excellent throughout.

As Odette/Odile, Kristy Lee Donovan was glorious. As Odette, she was regal yet fragile, luminous and  enchanting in white. As Odile, in black with a semi-transparent long skirt, she was hypnotised and controlled by von Rothbart, dazzling and bewitching in the Black Swan pas de deux (which was performed to one of the national dances not the expected Black Swan music).

Our hero, Prince Siegfried, rather casually dressed in black and white was passionately and splendidly danced by Joseph Phillips, who gave a bravura performance. He was elegant, imperious and yet impulsive with very graceful and dazzling leaps, jumps and turns. 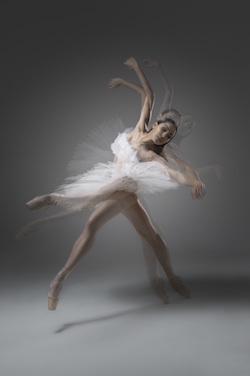 His mother, the Queen (Sarah Dimas), was coldly formal and commanding in a rather strange and wonderfully textured black dress.

This production retains the character of Siegfried’s best friend, Benno (nowadays often cut), as terrifically danced by Matt Dillon. Much is made of the crossbows and the “let’s go hunting” idea. Benno also gets caught up in von Rothbart’s mysterious machinations and spells.

Von Rothbart (Alexander Baden Bryce) was slinky and sinuous in black. He gave a fine performance and was technically impressive, but for me was possibly not menacing and ominous enough. “Traditional” versions are hinted at with his owl-like movements at times. In this version, he transforms Odette into Odile in an arresting, acrobatic pas de deux.

Archè is a striking, unusual, perhaps rather radical and most impressive reworking of the great ballet classic, Swan Lake.