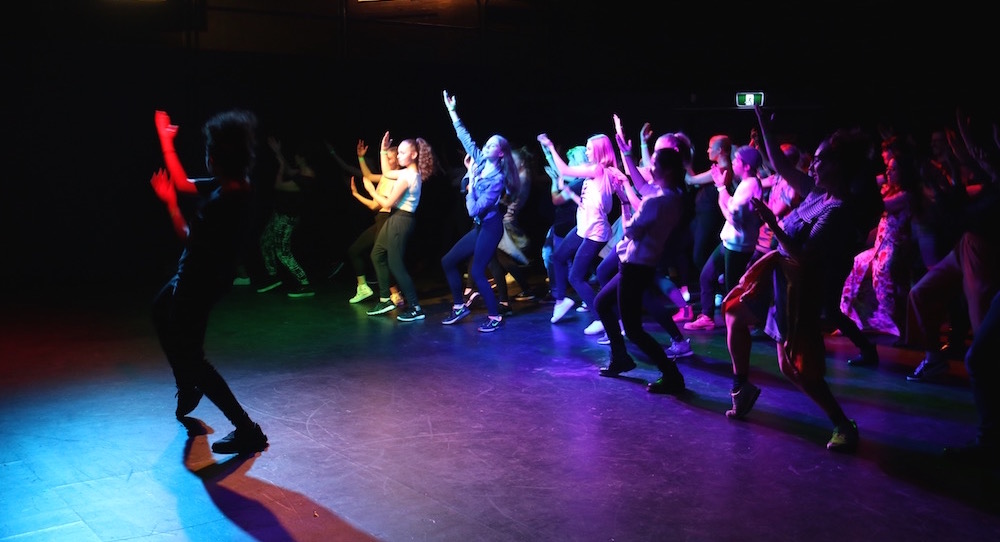 PACT Salon Series for 2017 began with an ultra-fun, informative and provoking start with The Big Bounce, curated by Matt Cornell. Described as “one-night mini festivals”, the Salons aim to showcase new works and act as a platform for performance, party and critical discussion to intersect.

The first of three Salons for the year, The Big Bounce began with an open dance workshop lead by Vanessa Marion from Groove Therapy with no mirrors, low lighting, great music and radiating support from Marion. The space became safe to bring your best dance self to the room, and the class was based on the foundations of hip hop and an ethos to encourage dancers who feel they are intimidated, not the right shape, too uncoordinated and/or have never been to class before but always dreamed about learning to dance. Marion encouraged you to summon the version of yourself that grooves behind closed doors (she calls this “bedroom-with-headphones-on-dancing”) to the room without any moment of embarrassment.

Marion acknowledged that training to improve our technique is the bridge between how we think or wish we could dance to how we actually dance. That technique, or an investment into training, acts as a means to an end, and we continually use our training to reach that vision in our head, whether it is to learn to pirouette or grapevine. The workshop was also a reminder that although “bedroom-with-headphones-on-dancing” is a fun solo, that dancing is also joyous as a shared experience.

After the workshop, participants were invited to a complimentary sausage sizzle in PACT’s courtyard to continue, or begin, discussions before being invited back into the space for Adam Warburton’s performance of Our House, along with dancers Sean Cheng and Paulina Boclan. Audience members were scattered across the stage as the performance happened around and through small gaps between viewers. Audience members were then invited to participate in the dance themselves, fulfilling the idea that the House is “ours”, open and can be shared by all.

We then watched Angela Goh’s performance of Predictable Dances and became participants in “fulfilling the prophecy” of the dance. To create this work, Goh employed the skills of a psychic who predicted what will happen in the dance, which she then fulfilled. On an interview with FBi Radio, she talked about this project as a way to be with dance which is desireless. It removes the wants or ego of directors or choreographers and goes beyond chance choreography (perhaps most famously used by Merce Cunningham). It is an opportunity for us not to question or justify the dance but instead to just be with it where nothing can go wrong.

We then spoke about dancing in a recorded podcast, which was uploaded to Cornell’s personal podcast, Wombat Radio. Using the Wombat Radio format of beginning with what you do, how you do it and why you do it, the performers from the night spoke about their individual practices. This discussion included teaching styles correctly (particularly hip hop, which is born out of a particular club culture; however, in Australia, often anything is taught as hip hop), the unspoken dialogue between the DJ dancer, the role of a DJ wanting the best for the collective and the lack of hierarchy.

DJ Sezzo Snot facilitated the final part of the night by DJ-ing her, set and I couldn’t help but think about the points she raised during the discussion – how the DJ acts almost as a sociologist who is required to read the crowd and try and execute the best for the group as a whole. For a bit of theatrical flair, The Big Bounce was divided into four parts, which complemented Cornell’s wishes of The Big Bounce being an event where we can “learn dancing, watch dancing, talk about dancing and just do some dancing.” Ultimately, the first of PACT Salon for 2017 allowed everyone to access dance in various ways whilst keeping dance as the main focus and as a reminder that dance is always better as a shared experience.

For information on the next PACT Salon, visit
www.pact.net.au/whats-on/2017/3/26/pact-salon-2-skeletons-and-self-portraits.