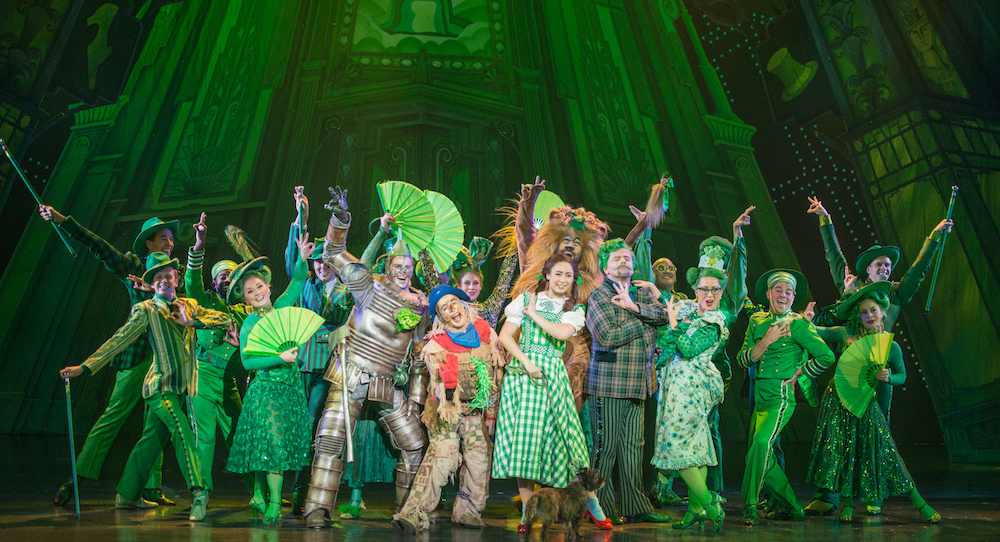 Get ready, Brisbane and Sydney, because “We’re off to see the wizard, the Wonderful Wizard of Oz!” After a successful season in London’s West End and a USA tour, a new stage adaptation of the iconic and much loved MGM movie musical masterpiece, The Wizard of Oz is coming to Australia from November this year. With signature songs, including “Ding, Dong the Witch is Dead”, “Follow the Yellow Brick Road”, “If I Only Had a Brain” and of course Academy Award-winning Best Original Song “Over the Rainbow” to name a few, this production has all your favourite moments with some new surprises.

While the stage show’s producers are still on the hunt for the perfect triple threat performer to fill the shiny ruby slippers made famous by Judy Garland, a stellar leading cast has already been assembled, including Anthony Warlow playing The Wizard and Professor Marvel, and our favourite leading ladies, Lucy Durack and Jemma Rix reprising their roles of Glinda the Good Witch and the Wicked Witch of the West respectively, from the spectacular production, Wicked.

Suzanne Jones (left) at auditions for ‘The Wizard of Oz’.

To get the inside story on what’s new in the land of Oz, Dance Informa spoke with Co-Producer Suzanne Jones on the first day of ensemble dance auditions in Sydney.

The Wizard of Oz musical is returning to Sydney. When was it last here, and why have you and John Frost decided to bring it back now?

“Well, actually this show is brand new to this country. There are several versions of The Wizard of Oz. The original was back in 2001, which was a Gordon Frost Production. This production is the Andrew Lloyd Webber version, which has five new songs written by Andrew with lyrics by Tim Rice. What they’ve done is taken the movie and put it on stage, and the Wicked Witch (Jemma Rix), Glinda the Good Witch (Lucy Durack) and The Wizard (Anthony Warlow) have more songs, which is great for us!”

What are the similarities and differences between the MGM movie and this stage adaptation?

“So, this version is the movie on stage. It has ‘Follow the Yellow Brick Road’, ‘We’re Off to See the Wizard’ and all of those songs, but then what we’ve done, as I’ve said, is add five new songs to it. It’s freshly choreographed, and scenically, it’s beautiful.”

Can you tell me about the new songs that Andrew Lloyd Weber and Tim Rice have created for this production?

“So, there are two new songs for the Wicked Witch. She sings a song about the fact that she desperately needs those shoes — ‘Red Shoes Blues’, which is fantastic. Glinda gets a whole new welcome to Oz song, and as you know, the Wizard is a dual role of the Wizard and also Professor Marvel, so he has a new song for when he first meets Dorothy, and it’s called ‘The Wonders of the World’. It’s about how wonderful the world could be, and it opens up Dorothy’s mind to what is possible because she is a small farm girl; she’s not Dorothy the Wizard of Oz then. I think of The Wizard of Oz as this wonderful thing that we all know and love, and then Tim Rice and Andrew Lloyd Weber sprinkle fairy dust and put a couple of new songs in just to lift it a bit.”

Sarah Lasko as Dorothy and Nigel as Toto in ‘Over the Rainbow’. Photo by Daniel A. Swalec.

How would you describe this production of The Wizard of Oz?

The Wizard of Oz musical was a success on the West End and in the USA. Has the popularity of the musical Wicked helped in its success?

How easy or difficult was it to get Lucy Durack and Jemma Rix to reprise their roles from Wicked of Glinda the Good Witch and Elphaba/The Wicked Witch of the West respectively for The Wizard of Oz?

Rachel Womble as Glinda. Photo by Daniel A. Swalec.

“They are best friends, they love each other, so for a start that was fantastic. I think particularly for Jemma, the role of Elphaba in Wicked is a very kind of misunderstood gentle human who has a battle. The Wicked Witch in The Wizard of Oz is absolutely horrible. She is a nasty piece of work, and there is nothing nice about this woman. So when we spoke to Jemma about it, she was really excited to be able to be just grumpy and be horrible because she’s not. She’s a delight! So I think for her, it was very much a departure, so while the roles are the same, the roles actually aren’t the same. For Lucy, this is the grown-up Glinda. This is where she would have got to from Wicked, so it gives her a chance to grow.”

How important is it to have a well-known musical theatre star like Anthony Warlow in a lead role (as The Wizard and Professor Marvel)? Will you be taking the same approach when casting the role of Dorothy?

“No. I think what we’re looking for is pretty much the opposite. So Anthony is incredibly well-known, and he’s an amazing performer. You melt when he starts singing, so for that it’s fantastic. For Dorothy, we are looking for someone we have never seen before, so we’re not looking for anybody with a profile. I kind of see those two coexisting incredibly well. For Anthony, he’ll get to experience a person where it probably won’t be their first show but one of their first shows. It will probably be a big break for them, so he can get to experience that excitement for whoever that is. She gets the benefit of this epic amount of experience that this man has, so actually while it’s not father and daughter, I do kind of see it very much like that. And then the girls, the witches, are kind of in the middle. I think as a foursome they will be a force to be reckoned with.”

What is the most challenging part of bringing a musical like this to Australia?

‘The Wizard of Oz’ auditions.

“I think like putting any theatre on, it’s a bit like lassoing the clouds. Is that the right title for people now? Is that what audiences want to see? Do we have the dates in the theatres? Do we have the performers? Is it all going to line up? Can we get the creatives in? Today’s day one of auditions, and I’m sitting here thinking, ‘Wow, all these things had to line up; it’s kind of a miracle.’ It’s great, and it’s exciting, and I personally, along with my co-producer, John Frost, am really excited about bringing it to Australia.”

We’re here at the first day of ensemble dance auditions. What qualities are you and the panel looking for in a successful audition?

The Wizard of Oz will premiere at the Lyric Theatre QPAC Brisbane from 4th November and the Capitol Theatre Sydney from 30th December 2017. For more information and to purchase tickets, visit www.wizardofozthemusical.com.