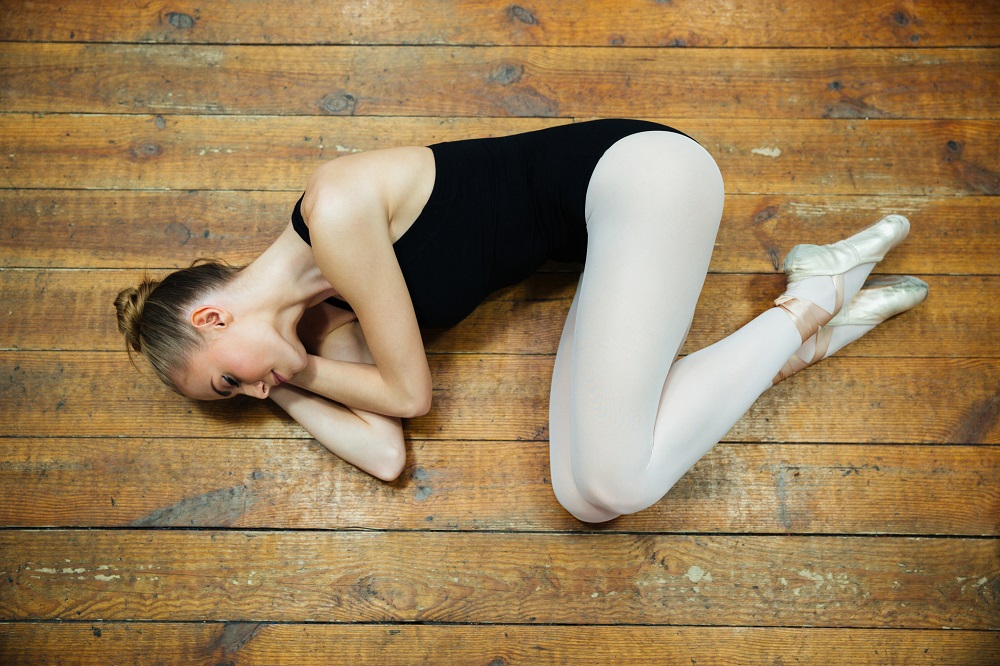 “It took me far longer then it should have to realise how much of an effect lack of sleep was having on my performance in dance, and later in the classroom,” says Sara Beery, former professional dancer with Atlanta Ballet and Armitage Gone! Dance in the U.S.A. “During my dance career, especially when we were in the theatre, I would struggle to get to sleep after the adrenaline of performing. The stress about how little sleep I was getting would sometimes keep me up even later!”

Adequate sleep is essential for any kind of athletic and academic performance but certainly for peak performance. Lack of sleep affects how the brain reacts to stress, motor skills, cognitive functions and speed1,2. For dancers whose careers rely on being quick learners and being able to remember complex choreography, sleep is imperative. Even small sleep deficits have been shown to clearly affect performance, memory and health1,2,3,4,5,6.

Katrina Binkley juggled academics with the demanding Pre-Professional program at Atlanta Ballet and is now a pre-medicine major at Georgia Institute of Technology. ”Around finals and Nutcracker, I was so much more tired than any other time of the year trying to coordinate studying and performing all those shows. Specifically, I always felt like I struggled to concentrate in the classes between shows and remembering combinations was so much more difficult (both of which I never had an issue with usually).”

More than just grumpy, lack of sleep can make you depressed.

We all know that we feel a little grumpy after a bad night’s sleep, but ongoing sleep deficits are associated with increased depression, mood disorders and even suicidal thoughts3,4. Lack of sleep is also associated with difficulty maintaining a healthy weight and more difficulties in losing weight because it disrupts metabolism and appetite controlling hormones5,6. As a dietitian who has done nutrition counseling with hundreds of dancers over the years, I’ve seen clients doing everything right with diet and exercise, but if they aren’t sleeping, it derails their hard work.

Juggling dance and academics, a recipe for exhaustion.

Many dancers are also juggling demanding academic schedules on top of long hours in the studio. In addition to dance, Beery graduated with degrees in electrical engineering and mathematics and is currently a National Science Foundation graduate research fellow exploring applications of computer vision and artificial intelligence for environmental sustainability. “Eventually, I was forced to face the fact that I was not a person who could function at full capacity on less than eight hours of sleep.”

In fact, very few people are able to function with less than eight hours, and teenagers need eight to 10 hours every night, according to the U.S. National Sleep Foundation4. No one can function with inadequate sleep for very long, no matter what they may believe. “A brain that is hungry for sleep will get it, even when you don’t expect it. For example, drowsiness and falling asleep at the wheel cause more than 100,000 car crashes every year. When you do not get enough sleep, you are more likely to have an accident, injury and/or illness”4. High stakes testing, academic overload and demanding dance schedules are just a normal day in the life for many. But at what cost?

Why is it so hard to get some sleep?

It’s common to hear sheepish bragging about overloaded schedules, number of advanced placement classes and lack of sleep worn like a badge of honor. Busyness is lauded like a trophy. Beery says, “I found there was a pervasive culture of pulling all-nighters that I felt pressure from my peers to participate in. I saw a direct effect on my physical and mental performance that I would try to mitigate with caffeine, disrupting my natural sleep patterns even further.”

As dancers, we are the type of people who thrive on pushing ourselves to extremes. That’s what makes us amazing, but when this comes at the expense of sleep or our mental health, our dancing and our studies suffer, too. We can’t be athletes of the Gods if we are falling asleep or jacked up on caffeine. Caffeine, sugar and poor diet can clearly affect sleep, but another major factor is blue light coming from electronic devices. “It is not surprising that several studies on adolescents have demonstrated that electronic exposure in the evening disrupts sleep. The use of multiple electronic devices at the same time has been associated with less sleep at night and a greater degree of sleepiness during the daytime”5.

Here’s what you can do to get better sleep.

Beery knew she had to make changes if she wanted to continue her success. “I cut back on caffeine, worked on changing my sleep patterns by getting in bed each night by a set time and plugged my phone in across the room to remove the temptation to mindlessly scroll through my Facebook feed,” she explains. “I find that by going to bed earlier and waking up with plenty of time to spare in the morning, I eat more well-rounded breakfasts and allow my brain to wake up before my first class of the day.”

Advice from the Pros.

Binkley says, “One main thing I would advise would be just to take a 20-minute break from time to time. I would feel so much more energised after just taking 20 minutes to sit and not think about the 1,000 tasks ahead of me. Breathe, meditate, stretch or even just take a hot shower. It’s the only way I’m able to continue studying and get the boost I need.”

Beery is now working on her working on her PhD at Caltech. “I find that I am far more productive when well-rested,” she says. “I spend about half of the time to finish problems in the morning than I would have late at night. I’ve been teasingly called a grandma by my peers, but I’m far healthier and happier on an early-to-bed schedule.”

Emily Cook Harrison MS, RD, LD
Emily is a registered dietitian and holds both a bachelor’s and master’s degree in nutrition from Georgia State University, U.S.A. Her master’s thesis research was on elite level ballet dancers and nutrition and she has experience providing nutrition services for weight management, sports nutrition, disordered eating, disease prevention, and food allergies. Emily was a professional dancer for eleven years with the Atlanta Ballet and several other companies. She is a dance educator and the mother of two young children. She now runs the Centre for Dance Nutrition and Healthy Lifestyles. She can be reached at emily@dancernutrition.com
www.dancernutrition.com