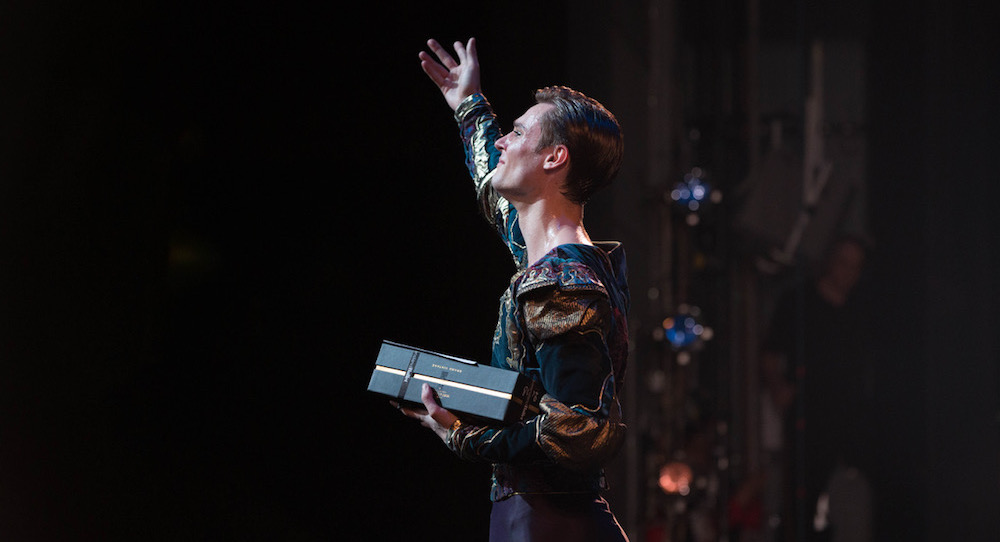 Congratulations to Queensland Ballet’s rising star Joel Woellner on his promotion to the rank of demi-soloist! Recently nominated for the 2017 Australian Dance Awards in the category “Outstanding Performance by a Male Dancer” for his role in A Midsummer Night’s Dream, Woellner is currently busy learning three parts for the company’s upcoming season, Dance Dialogues (June 7-17).

Born in Sydney, Woellner was awarded a full scholarship to the Houston Ballet’s Ben Stevenson Academy after competing at the Youth America Grand Prix in 2011. He later went on to become a dual prize winner at the Prix de Lausanne in Switzerland. After graduating from the Academy with the Best Dancer award, Woellner joined Houston Ballet as an apprentice in 2013, and was promoted to the corps de ballet in 2014, before moving to Queensland just under two years ago.

Dance Informa speaks here to Woellner about the joys of career success.

“Thank you! It’s such an honour to move up through the ranks; it’s what every dancer aspires to do. It was a moment I’ll never forget, especially after such an incredible season. I felt really honoured to be entrusted with the lead role of Prince Siegfried in Swan Lake, particularly as Li [Cunxin, artistic director of the Queensland Ballet] had performed the role under Ben Stevenson’s direction in the first season of the production with Houston Ballet. In terms of what has changed, nothing at all! On Monday morning, it was just straight back into the rehearsal studio to start working on the next season. But actually, that’s perfect, as I get to do what I love every day.”

You were previously a dancer with Houston Ballet yourself. Tell me, when did you first meet Li, and what made you decide to come back to Australia two years ago?

“I first met Li at the Alana Haines Australasian Awards, a ballet competition in New Zealand. Li and his wife, Mary Li, were the judges of the competition. I remember them being very generous toward me and encouraging me to go to Houston Ballet. I had already been offered a full scholarship, and their encouragement was what finalised my decision.

Whilst overseas, I stayed in contact with Li, and he became someone I looked up to from afar, especially with everything he was doing for Queensland Ballet and the dancers there. Whenever I would come back home from Houston, I would travel to Brisbane to see Li and the company. Each year I came back, I saw that the company was growing from strength to strength. Queensland Ballet has always been a company with which I hoped to be involved.”

You mentioned that your routine hasn’t changed much. Could you take us through a typical day?

“Well, each morning begins the same way with an hour-and-a-half of class. It’s a wonderful ritual to start each day, prepping and warming up for the day to come. Following class, it’s straight to rehearsals. At the moment, we are working on Dance Dialogues, which is always a really exciting part of our season. There are four short ballets choreographed by Queensland Ballet dancers and other up-and-coming choreographers. I’m working with Alice Topps on Warm Tears and Jack Lister in Still Life, and I know that both are going to be absolutely incredible pieces. So far, it’s been a wonderful collaborative process and a chance to push new limits.”

What’s the most fulfilling aspect of your job?

“The most fulfilling aspect of my job is that I get the opportunity to dance on stage and tell a story. The best thing about ballet is that through movement, you can transport people to another world, another time and take them away from their daily life. It’s a beautiful feeling as a dancer to embody a person or character that is completely different to who you are. I just love being on stage and being part of the storytelling process.”

Do you have any mentors? What have you learned from them?

“I feel really privileged to be here at Queensland Ballet, as I get to work with my mentors every day. I work for very experienced and knowledgeable dancers — all the staff at Queensland Ballet have themselves had phenomenal professional careers, performing roles that I can only dream about, and all of their critiques and artistic input are invaluable. When preparing for a big performance, they will often walk me through all aspects of the role, from emotion to artistry and characterisation. The artistic staff also teach me how to perfect steps and even how to manage the pressure and nerves of performance. I have learnt so much from the staff here at Queensland Ballet!”

Can you name a dancer who has particularly inspired you? Why?

“Mostly, I’m inspired by the dancers here at Queensland Ballet. I get to work with incredible dancers every day who constantly inspire me and help me push myself beyond my limits. If I had to choose just one dancer, though, I guess I’d say Joseph Walsh, principal of the San Francisco Ballet. His movement quality is so fluid and precise, and he’s such a beautiful emotional artist as well. There have been many times when I’ve been brought to tears watching him on stage.”

You have been earmarked as a rising talent, but even so, you must have experienced your own challenges as a dancer. Tell us about some of them and how you have fought to overcome those challenges.

“I think the greatest challenge I have had to overcome regularly is nerves leading up to performances. I am always really anxious and always thinking about what could go wrong. The worst time I can remember was at the finals of Prix de Lausanne in Switzerland. Every performance is important, but at the Prix everything feels heightened. You only get one attempt at a classical solo, and there, watching you, are the best directors in the world, along with the world’s best dancers. The pressure feels intense!

It’s really challenging, but no matter how bad the nerves, I tell myself to focus on the moment and cut everything else out. When I can forget that anyone else is watching and trust myself, I am able to give my best performances.”

How do Houston Ballet and Queensland Ballet compare in terms of working style? Do you have any habits from Houston which you’ve carried over to QB?

“One of the best things I have brought with me from Houston Ballet is the ability to learn choreography quickly. At Houston Ballet, it was common to work with lots of different directors and choreographers — new works were always being created, and multiple ballets were being staged at any one time. It’s an ability that has served me well here, as Queensland Ballet is very similar in terms of constantly having lots of new works being produced each season. I also found that in America, the dancers possessed a very confident attitude in attempting new steps and had no fear in trying anything. That’s something I admire very much about the dancers at Houston Ballet, and something I always try to emulate.”

What would you be if not a dancer?

“Ballet has always been the dream. I’ve never really let myself think about anything else. I have always remained focused on ballet and achieving my goal!”

What’s the best piece of advice you have received in your career?

“I think the best advice I have ever been given is to believe in yourself. It may sound corny, but it’s also true. In any circumstance, as long as you have put in the work and the effort, when the time comes you will always be able to give your best performance.”