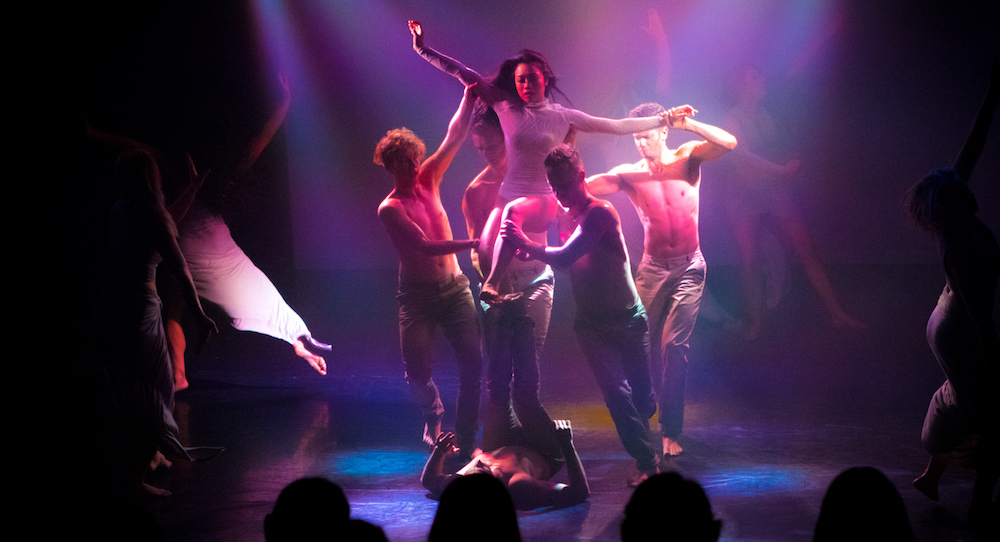 North of the river, between Sydney Road and Lygon Street, there lies a functional looking modern building of minimalist design. Inside, a modular space: classes, rehearsal rooms, a 200-seat black box theatre.

Melbourne Dance Centre (MDC) is at once a school and a company HQ, a hub for dance students and creatives alike. The couple-cum-business partnership that drive both the corporate and artistic enterprise, Daniel Ryan and Alfie Scalia, are lifelong jazz dance nuts who never gave up on their vision for challenging, narrative-based dance theatre and who, in 2017, stand ready to burst out with a new work and a big welcome mat for the city’s dance community.

As Ryan says simply, “We wanted to create a space that made it a little bit easier for us to workshop pieces and evolve works and even present them. On a business front, we also wanted to make it viable, which is hard in the arts to do stuff that somehow balances creative and business.”

It’s the classic conundrum that many in the so-called creative industries know firsthand. Ryan and Scalia, however, have decided to tackle the dichotomy head on, combining creative ambition with a clear-headed pragmatism. The structure of MDC, and its physicality, has afforded the couple a ready venue and a source of both income and network. “It’s allowed us to try things out a little bit more,” Ryan admits. “Like, we can be a little more experimental.”

Scalia and Ryan are, by now, veterans of music theatre and commercial dance, the former having co-choreographed the last Meat Loaf tour and the TV Turns Fifty event, and the latter having appeared in things like Saturday Night Fever, The Man Of La Mancha and worked on Claire Bowditch videos. Yet, across their twin careers, they have always wanted to be more than hired guns. Hence, Ignite The Dark, the company they established in 2010 to produce what they call “highly stylised and soulful jazz dance works”.

Indeed, Ryan is adamant that the form can transcend jazz hands and Broadway kitsch. “We believe that jazz dance can and should touch on the human condition, of the human experience and push it in a stylised fashion,” he says.

Having done a workshop season at MDC last year, they are prepping to stage the “alpha” version of the company’s debut full-length piece, The Colour Of Night, in September. “It’s going to start in a very comfortable, relatable place for most people, coming into the evening,” Ryan reveals. “But then it starts to move in different shades and in very unexpected ways as the night progresses. It’s quite allegorical in certain places. Elements of it are almost surreal. The night starts to feel less safe, less like what you’ve experienced before.”

Initially, Colour will play in their onsite 200-seater at MDC before branching out into the regions; and if that sounds like a lot of “busy”, remember that Scalia and Ryan will also be keeping the business on track and maintaining their 20-year relationship.

According to Ryan, though, the intensity of working, creating and being together is paying off. “That type of a working relationship has been good for us,” he explains. “I mean, we’re together 24/7, she and I, but it’s worked really well for us. Having each other to bounce off has been a good thing because whereas one person’s head might work in a very set direction, the other person is kind of able to counterpoint things. I’m not sure how things would have travelled without that.”

As with any business of scale, systems help to keep things going. Ryan is very clear about the fact that good systems are what allow him and his partner to keep Ignite The Dark alive. “I mean, at the end of the day,” he states, “this is about arts, about creativity and expression.”

Ignite the Dark in ‘The Colour of Night’. Photo by Adrian Close.

Although the domains of school, room-for-hire and dance company can often operate at odds, synergy exists in the people who come through the door. For creatives like Ryan and Scalia, this is invaluable. “Realistically, it’s hard to just do your thing,” Ryan muses aloud. “The more people who are pushing their own ideas out there in a concerted way, the more we can stop and take notice and identify possibilities for types of audience for us; and that’s what we’re looking at now.”

Having come from the comparatively tightly defined and perhaps narrow world of commercial dance (a term he is not fond of), Ryan argues, “As a theatre maker, it can be very hard to get people to understand what it is you’re trying to do. People can have very clear ideas about what they believe a dance show is, even though that idea doesn’t necessarily offer the breadth and the range of what could potentially be out there.”

Ignite the Dark in ‘The Colour of Night’. Photo by Adrian Close.

Through Ignite The Dark and the MDC, Ryan and Scalia are working to create space for themselves and others to throw off a few shackles and make the city’s dance ecosystem both more diverse and more readily viable. Now that should keep them busy.

For more information on Melbourne Dance Center, visit melbournedancecentre.com, and to learn more about Ignite the Dark, head to ignitethedark.com.