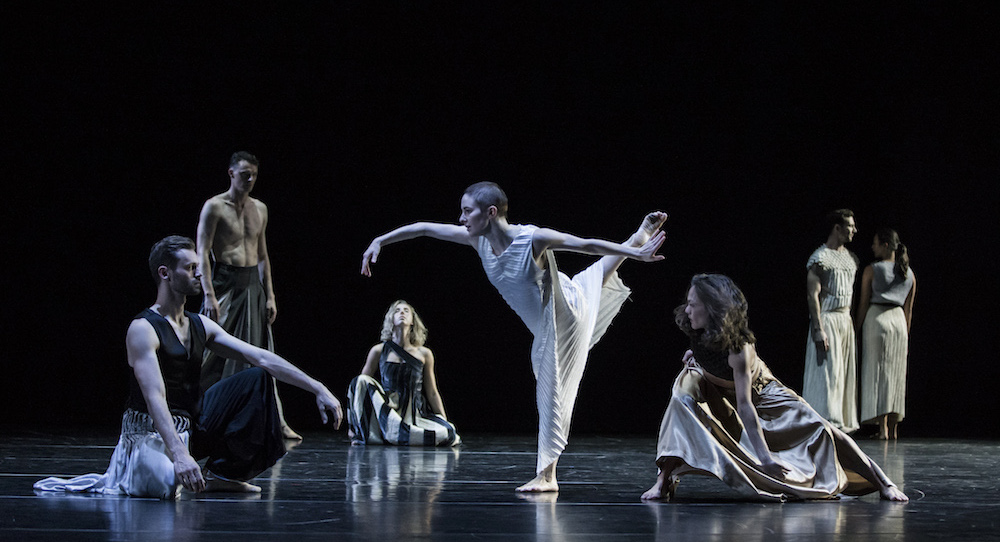 With Taiwanese origins, Cloud Gate II is causing a stir in the contemporary dance world, and the cross-cultural contrast it provides in Orb is a cross-cultural masterstroke.

The excitement was mutual for both directors to find the opportunity to work together. Tsung-lung expressed his feelings following Bonachela’s invitation to come and work with Sydney Dance Company on Orb, saying, “I had a special feeling here in my heart, and I wanted to put that feeling in a suitcase and come to Sydney.”

Both works highlight the primacy of the circular symbols – the full moon and ocho (the figure “8”) – to blend the ancient and modern, in a search for ways of expressing the inexpressable or inarticlate feelings.

The program is in two sections, with each choreographer creating his own work with individual composers and costume designers around the concept of Orb and with the company’s dancers split between the two pieces.

Tsung-lung’s Full Moon opens the evening, with the intoxication of a forest full of promise and uncertainty under a full moon. Various characters arrive, mythical, mesmerising; it feels like a southeast Asian Midsummer Night’s Dream. In fact, it is a work inspired by ancient Chinese poetry from the seventh century BC.

As Tsung-lung explains, “Why do people dance? …when we search to express emotions and words are not enough. I often have a feeling tingling deep in my heart, difficult to express in words. I hope to convey this feeling through dance, through the myth and the moon.”

With a distinctly southeast Asian score, incorporating chimes, bells and tenuous strings, we find ourselves within an ethereal environment where the mythical characters seek to explore their unique forms of expression in “the pursuit of having the understanding of the full moon at all times.”

The individual costumes designed by Huai-chih Fan highlight both the individuality of the dancers’ expression, as well as the effortless flow of circular movements. It is as if we hear gurgling water flowing in an ancient and sacred garden. The moon gods and godesses have come out to dance in all their diversity.

Reminding us of Shiva, or an Indonesian sculpture, draped in pieces of red cloth, Latisha Sparks’s dancing is mesmerising, bold and beautiful. In her powerful dance, there is almost a magical strength in her movements as she leaps and twists, yet remains closely connected to the ground.

In sharp contrast to the Full Moon mysticism and dreamy surrreality, Bonachela’s Ocho transports us to the gritty super-reality of a city, with its imposing concrete solidity and the concept of separate spaces – “inside” and “outside”.

We see the eight dancers inside a glass room, looking out at the world, looking at us, the audience. And as they open the door and cross the line between inside and outside, each dancer’s movements search to express their own unique relationship with the stark urban reality in an attempt to find their own way of being, their own path.

“It was a chance to focus on each dancer and their uniqueness,” Bonachela explains. “It is a very different way for me to approach a dance piece.”

The musical score by Nick Wales is a surprising but powerful mix of “disguised trumpets” to provide an undercurrent of power and authority, followed by haunting dreamtime singing. In this work, Bonachela has departed from lightness and lyricism, and has excelled in producing a grounded, gritty dance piece; each dancer is mesmerising and intriguing.

The program in its totality seems to juxtapose contrasting elements: the mythical vs. the real, the natural vs. the artificial, the forest vs. the city, mortals vs. immortals. But in his commentary, Bonachella suggests that by turning the Ocho, or figure eight, on its side, we come to the infinity symbol, with the two works flowing into each other, into an infinite loop orbiting the sun and the moon – the cycle of life.