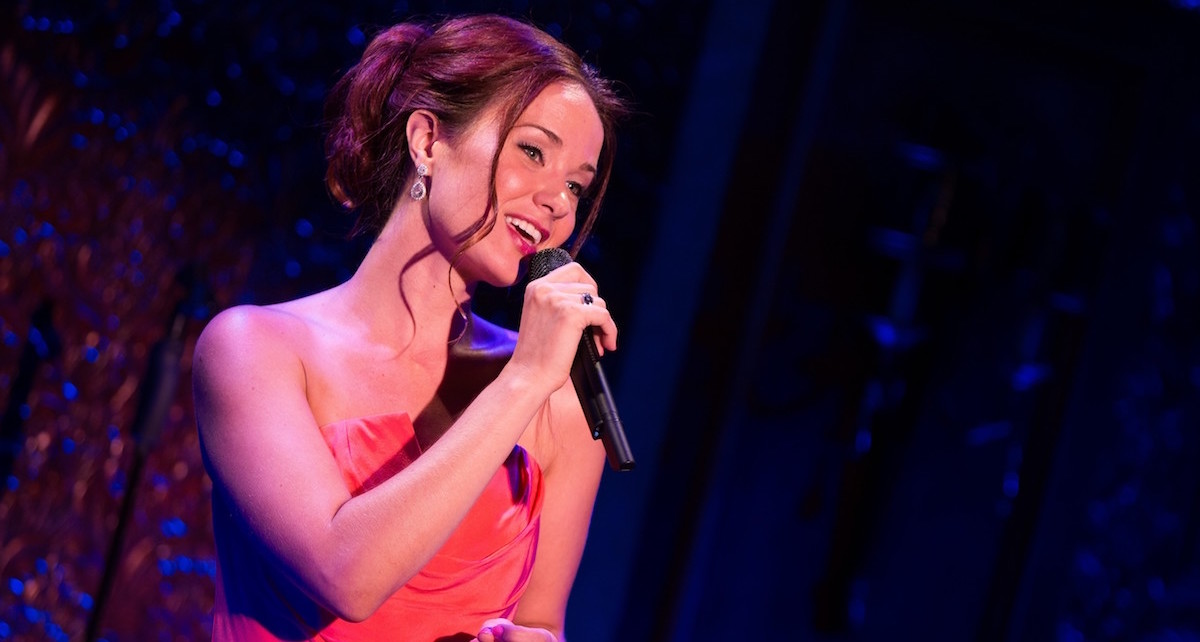 Broadway and West End theatre star Sierra Boggess is coming to Australia! Described by Lord Andrew Lloyd Webber as “one of the most sublime voices I have ever worked with”, Boggess will be touring Sydney, Melbourne and Brisbane, from the 3rd of June. She is well known for her portrayals of Christine from Phantom of the Opera, Ariel from Broadway’s The Little Mermaid and her recent turn as Principal Mullins from School of Rock. She speaks here with Dance Informa about what it takes to deliver world-class performances.

What have preparations been like for your Australian concert in June?

“Great. I’ve just been solidifying the song list and figuring out what I want to sing about and all that. This show has been a few years in the making, and I’m really thrilled that I get to bring this to Australia now. It’s a place I’ve always wanted to go, so I’m really, really excited about that!

How I put my show together is, I come up with the songs that I want to make sure that I’m singing — things that people would know me for, but then I also try and analyse what I want to speak about and what I want my message to be, so that people leave feeling like they’re taking away something other than just a list of songs from my career. It’s a really fulfilling project to come up with a show that represents who I am.”

You’ve played a Disney princess, Christine from Phantom of the Opera and many other characters over the course of your career. Do you feel there are commonalities between the different characters you’ve portrayed on stage?

“Well, I think it’s really cool to have had my Broadway debut be a character like Ariel. So many people identity with her, particularly people who consider themselves like the underdogs of society. I love that people identify with Ariel and feel like, when they meet me, that they’re meeting somebody who understands them.

If you think about it psychologically, Ariel is the princess who represents the people who feel like they were born in the wrong body or born in the wrong place or born in the wrong time. It goes really, really deep. So I feel a responsibility to my fan base to make sure that my message is that you are enough just as you are. That’s why my war cry has become ‘You’re enough, you’re so enough, it’s unbelievable how enough you are.’ And I think people are as excited to hear me say that phrase as they are to have me sing ‘Part of Your World’. It’s like the craziest thing; it’s so cool.

Meanwhile, a character like Christine represents the person who loves the unlovable, and so a lot of my fans also relate to that. They say, ‘Oh, you understand loving the unlovable, and I’m unlovable,’ or maybe ‘I didn’t even know that I couldn’t articulate that, but I think that’s part of what it is,’ or whatever they’re feeling at the time, so yeah, there’s a lot of that stuff. I just think it’s really fascinating, so I make sure when I’m doing my shows that I sing songs from those musicals.”

How do you connect on a personal level with the characters you portray on stage?

“It’s great to be able to bring those characters to life. I never have played a character that I don’t relate to in some way. I think that’s part of our job, to find things that you relate to in your characters. I certainly wouldn’t play a character if I couldn’t understand any part of her. I think the character I’ve played which is most different from me is the one I played in School of Rock, Principal Mullins, who sees the world very black and white. But I loved playing her, at first because she was so different from me, but then I found things in her that I could relate to as well. That is always a really fun part of my job.”

Sierra Boggess in ‘The Phantom of the Opera’. Photo courtesy of Supplied.

How do you prepare for your roles? I’m sure you don’t just prepare emotionally, as there are, of course, technical and physical elements to think about as well. Tell us about all those aspects.

“I look at it like spring training. There was an interview with Jennifer Lopez of all people, and she was talking about the fact that when she’s not doing her show, she lives like a regular person, but there comes a time when you have to get in the ‘zone’. I honestly don’t know exactly what she said, but people are always asking me about how you get in shape and stuff like that and it really is more like, okay, I’m about to do this role, so spring training is now happening. Preparing for Christine is a great example. With Christine, I’m back in dance class, I’m singing every day in the operatic way, watching what I eat, doing all the things I need to take care of myself so I can be the vessel for Christine. That’s how I prepare.

And when I’m getting ready to do a solo show like what I’m bring to Australia, well, I’ve been in spring training for a long time now because I have to stay healthy so I can be open to singing all these different ways, and be clear in my head about how I want to present myself and what I want to say. I meditate, I do yoga, all that kind of stuff. Yeah, I just do really good things for myself so I can be a good tool for the world.”

What kind of dance classes do you enjoy taking?

“When I majored in musical theatre, I took a lot of dance classes because that was the thing in which I had the least experience. I didn’t take dance from a young age, so it wasn’t until I was well in my teens that I started taking any sort of dance. And I love it, especially ballet, which is interesting because I’m not somebody who lives my life very black and white. I’ve never been somebody who feels like I need rules, but there’s something about ballet. I love that you know exactly what you’re doing. For some reason, I find it very freeing to try and honour exactly what something is supposed to look like, to sort of know the goal and have a way to get there. Ballet tells you exactly how to get there.”

Ballet is kind of like a counterpoint to your experience in other areas of performance then, perhaps?

Sierra Boggess in ‘The Little Mermaid’. Photo by Per Breiehagen.

“Totally. And completely counter to other areas of my life. I live in the grey so much or in the colour, and with ballet it’s so regimented, it’s so different. I think I just like that contrast.”

As you mentioned earlier, you’ve never been to Australia before. It would be fun to know your impression of Australia right now!

“It’s literally like a land that I thought I would never get to visit, but I’ve always known about it. I had a really cool teacher when I was in fourth and fifth grade, and she was obsessed with Australia. I think we did reports on Australia, and she went almost every single year and would come back and talk to us about it and teach us about it. And I can’t tell you — there’s not a single person I’ve met who has been like, ‘Oh, you’re going to hate it!’ Everybody I know who has gone to Australia has loved it and is excited for me. I’m just looking forward to everything really!”

You’ve obviously had a lot of touring experience in your career. How do you keep yourself from getting exhausted mentally and physically? It must be really demanding.

“It is! I’m very careful about what I put into my body, the amount of water I’m drinking, not talking too much after a show or whenever travelling. Just being really…mindful would be the word, really mindful. And I avoid other people’s germs. That’s really important actually. I do have to be careful about people’s germs.”

I’ve heard that you have perfect pitch. Is that true? What exactly does that mean?

“Yes, it is true! Perfect pitch is this strange anomaly that people think means that you never are flat or sharp or anything, and that’s not what it is. It’s simply that if somebody plays a note on the piano, I know exactly what note that is. I can give the name, and I can hum it for you and even play it on the piano. Actually, both of my sisters also have perfect pitch — they even did this study on us! When we were working in Denver, Colorado, this man from Juilliard came to our house and he took cheek cells, gave us tests, all that kind of stuff because it’s very rare for three people to have perfect pitch in the same family, and our parents don’t have it at all. At that time, I didn’t know perfect pitch was even a cool party trick. I didn’t know anything; I just thought that everybody knew the name of that note which was just played!”

That’s really interesting. So you don’t see perfect pitch as an advantage?

Sierra Boggess in ‘School of Rock’. Photo by Bruce Glikas/FilmMagic.

“It has its advantages and disadvantages. If I see a piece of music, I can hear it in my head based on just looking at what the notes are without having to run to the piano and play it. I can sing it just looking at the notes on the page. But then if someone has decided that they want to transpose a piece of music, say, up a third or whatever, and I’m looking at the notes that are on the page, I’ll need them to send me a piece of music with the transposition. Otherwise, I’m going to hear it a third down or whatever based on what notes are on the page in front of me. So in those cases, it really just messes with your head! It’s kind of just a weird thing that the research apparently suggests you’re born with. Clearly, though, I have something wrong with me!”

Do you have any words of advice for young Broadway hopefuls?

“I wish someone had told me that perfection doesn’t exist, so stop striving for full perfection. I think a lot of young performers and artists are constantly striving for perfection, especially in the world that we live in now where everything is run through so many filters and you have no idea what’s real or not.

I would say stop striving for perfection, and trust that you are enough. If you love it, then it’s a lot of hard work, but it’s worth it. So get passionate about what you want to do, and then work your arse off!”

For more information, go to www.concertworks.com.au/sierra-boggess.