When Kim Grant-Taylor, Sharon Macrow and Pep Rigano of the Australian Company of Performing Arts (ACPA) went to the Australian Dance Festival in 2016, they came home full of enthusiasm about encouraging their own dance students to go to the festival the following year. But when they returned to Adelaide, where ACPA is based, they discovered that most students couldn’t afford the costs associated with travel and accommodation. This inspired them to think about offering a similar event in their state so young South Australian dancers could have the same opportunity as those in the eastern state.

“We thought there was no reason why our students should miss out on an experience like that just because of finance,” Pep tells Dance Informa. “It can cost up to $1,000 to travel interstate for an event like this, whereas the SA Dance Festival will be only $170 for two days.”

Celebration instead of competition

The ACPA trio knew it would be beneficial for all young SA dancers, but suspected other dance schools might worry that they were trying to poach students. But the SA Dance Festival, scheduled for the Queen’s Birthday long weekend in June, is all about giving their own students the experience of the festival, and about bringing the SA studio sector together.

“The focus is to bring the dance schools together to celebrate dance rather than it be a competitive environment,” reveals Pep. “There are no competitions, but there are workshops, a teachers’ day and a showcase night. The response from other schools has been really good, and they are really excited and have thanked us for bringing these artists to Adelaide.”

To avoid stepping on the toes of other schools, the organisers of the SA Dance Festival have gone through dance schools to promote the festival rather than directly to students.

“We get in touch with them to let them know about it, and invite them to be involved in the showcase, and then come to workshops,” Pep says. “Some don’t have time to do the showcase, and so their students respond independently.” 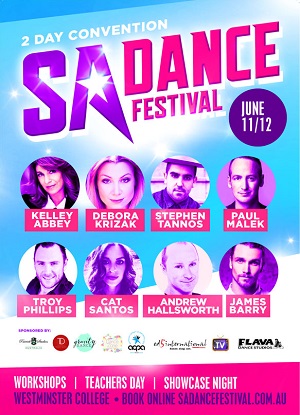 Bringing the SA dance community together

The aim of the festival is simple. It is all about bringing the dance community together. Since dance studios are small businesses that often have a strong family feel, it’s not surprising that dance studios are fiercely protective of their students and don’t want to lose them to a competitor. But this approach can lead to isolation and stagnation, whereas connection and collaboration open up the doors to all sorts of possibilities. And this is just what the SA Dance Festival will encourage.

“I recently went to the Victorian Dance Festival and admired how the teachers from all the different schools spoke to each other,” explains Pep. “I admired how they didn’t feel threatened. They were happily talking about each other’s schools and what was working for them, rather than worrying that other schools would steal their students.”

He continues, “On the showcase night, I watched all the students and people who came to watch supporting each other and cheering for other schools. There was no quiet clap for someone; it was all equal. It seemed like the Victorian dance community had come together. They weren’t worried about who was the best, and it was really refreshing. So it’s all about trying to achieve that in our community. It’s also good for students to see a bigger picture. The Festival gives them workshops and teachers from interstate, and it also gives them a pathway to think about where they might go with dance.”

Pep shares the ways that the SA Dance Festival will benefit both schools and students. “Students will get to witness their teachers, who they often idolise, working in unison together, which I think is a really important moral in life. For dance schools, we hope it will give a push and instigate a movement to create a higher standard as a state to produce better performers, better dancers and a greater environment to do what they love.”

He adds, “It’s a great opportunity for students to meet the industry professionals we’re bringing to the festival and to promote themselves to those professionals. We’re excited because our students get to expose themselves to these teachers and choreographers who are well known, and when they go interstate, perhaps they’ll be remembered. It’s a networking opportunity as well. Our industry is about networking. It’s about who you know. There are so many talented dancers out there, and choreographers want to work with people they know. If you are working as a freelance dancer, it’s a tough journey.”

In South Australia, the opportunity to meet professionals of the calibre that will be at the festival are few and far between. This lack of opportunity can make it too daunting for some to pursue a dance career, something Pep is keen to point out.

“A lot of students get nervous moving out of their comfort zone,” he says. “Todd Patrick [of Patrick Studios Australia] says that so many students call interested in their course, but they are so anxious about it all that they don’t take that next step. We see our students in our school give it up when they turn 17 or 18, even though they love dance, but the moment they need to move on their own and go interstate, they back out.”

Pep notes that he would have loved an opportunity like this when he was young. “When I was young, I was so passionate about dance and wanted to get as much experience as I could. I personally travelled a lot to LA and spent a lot of money. Now, South Australian dancers won’t even need to step out of their home to work with the nation’s best. If I’d had this when I was a kid, I would have thought it was the greatest thing in the world.”

The part of the festival that Pep is looking forward to most is the showcase night. “I’m looking forward to what I saw in Victoria. Ten schools performing on stage, supporting each other, kids being excited backstage, and parents all together in the audience. We haven’t experienced that yet in South Australia.”

The showcase night will be a performance of about an hour’s duration. There are 10 dance schools involved, and each will perform for about four minutes, in whatever genre they choose. Some of the festival sponsors, such as Transit Dance, will also be bringing their troupes from interstate to perform.

During the day, dance students and teachers will experience two days full of dance. Sunday morning, workshops for students go from 9am to 4pm, with a junior and a senior stream. Students will be able to work with each choreographer at the festival but at different times.

They’ll get to meet and learn from some of Australia’s top talent. Australian entertainer Debora Krizak, who is currently starring as Erma in Anything Goes for Opera Australia, will be offering musical theatre and voice workshops. Stephen Tannos, who teaches for Brent Street and choreographed for Australia’s So You Think You Can Dance, will be teaching commercial routines. Paul Malek, artistic director of Transit Dance will be teaching contemporary workshops. The participants will also learn Broadway jazz from Troy Phillips, hip hop from James Barry of Phly Crew, and learn all about turns, and strengthening and conditioning from dance coach Lucy Ellis. And those are just some of the artists they’ll get to work with.

The professional development stream for teachers will see them hearing from people like Karen Malek from Australian Teachers of Dancing about the five points of alignment and how to implement an exam syllabus, Sally Harrison from Perfect Form Physio, who will talk about turnout and safe stretching exercises, and choreographer Kelley Abbey on how to motivate students to become professional dancers and the right pathways to help them get there. At the end of the teachers’ day, there will be a discussion about how to bring the dance community together.

The Monday will include more workshops from 9am to 4pm, followed by the showcase night at 6pm.

Festival participants will also have the chance to browse everything dance-related with stalls from sponsors and other exhibitors, which include full time dance courses, costumes, dance stores, uniforms, ballet shoes and more. Come and meet Dance Informa at the exhibition!

The SA Dance Festival is targeted primarily at 10- to 16-year-olds.

In addition, Pep says, “There is also something for parents, too. They can be involved by buying a pass to watch the entire festival and be included. They are listed as chaperones and can obviously see the exhibitor stalls as well. It will be great for them to see what’s going on with their kids, and chat with these resourceful people to find out what is best for their child.”

The inaugural SA Dance Festival will be held at Westminster College on Sunday 11 and Monday 12 June 2017. For more information, visit www.facebook.com/sadancefestival and www.sadancefestival.com.au.