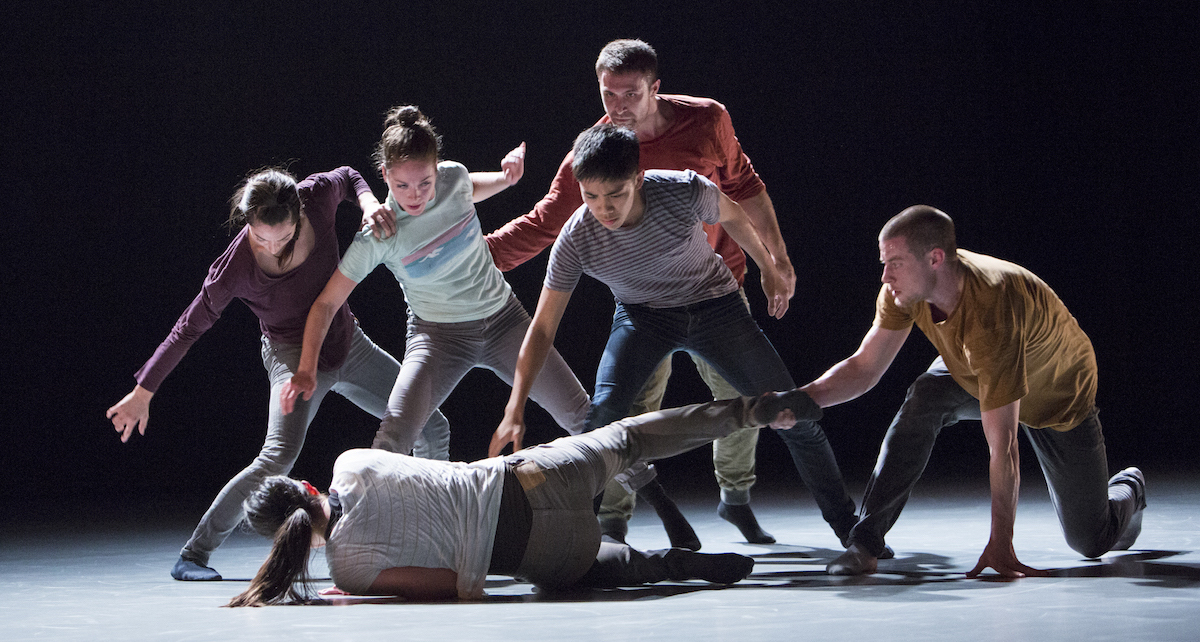 As part of the 2017 Sydney Festival, Canada’s Company 605 brought us its Inheritor Album, an hour-long exploration of  “concepts of inheritance and succession”. It is a collection of short solos and duos (hence the “album”), interspersed with some striking ensemble work.

In some ways, I was perhaps reminded of the work of Australian companies like Chunky Move and Australian Dance Theatre. 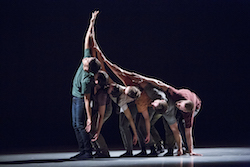 In Inheritor Album, the six dancers are dressed in casual street clothes and either wear socks or are barefoot.

With its use of most exciting visual computer technology – lighting by Jason Dubois, animation by Miwa Matreyek – the opening ominous floor circles, followed at great speed by the cast, segues into straight lines “drawn” on the walls and floor, which then become abstract squiggles and a series of collapsing office towers that, at times, almost invade the whole stage. There are also ominous low, floating cloud projections at some moments and a most effective use of shadows.

The relentless, driven, pulsating, booming electronic soundtrack includes an annoying percussive series of what are possibly gunshots (or were they sledgehammer blows?) toward the end. 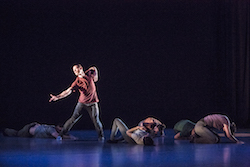 The choreography is mostly tight, precise unison work. Sometimes the athletic dancers all repeat the same movement, sometimes it is similar but with slight changes to make it individual, and other times there are sequences of close ensemble partnering or synchronised sculptural formations (in one section, like rippling underwater creatures, for example). At points in the work, there is a dialogue between the cast (“I think this, what do you think?”, for instance) with occasional interruptions of short, explosive solos. In other parts, there is an “us”  versus “them” feel, with one of the groups as an outsider. Isolation movements and breakdancing, breathless circular runs, slithery footwork, slides on the floor and rolling floorwork are all included.

There seems to be an atmosphere of wary watchfulness throughout; the dancers wear a continual neutral expression. Also, there appear to be a hunched, restricted and constrained use of épaulement at times, as if the cast were caught in a vertical cage, and there is a lot of use of angular arms.

Inheritor Album is a rare chance to see this intriguing company from Canada.