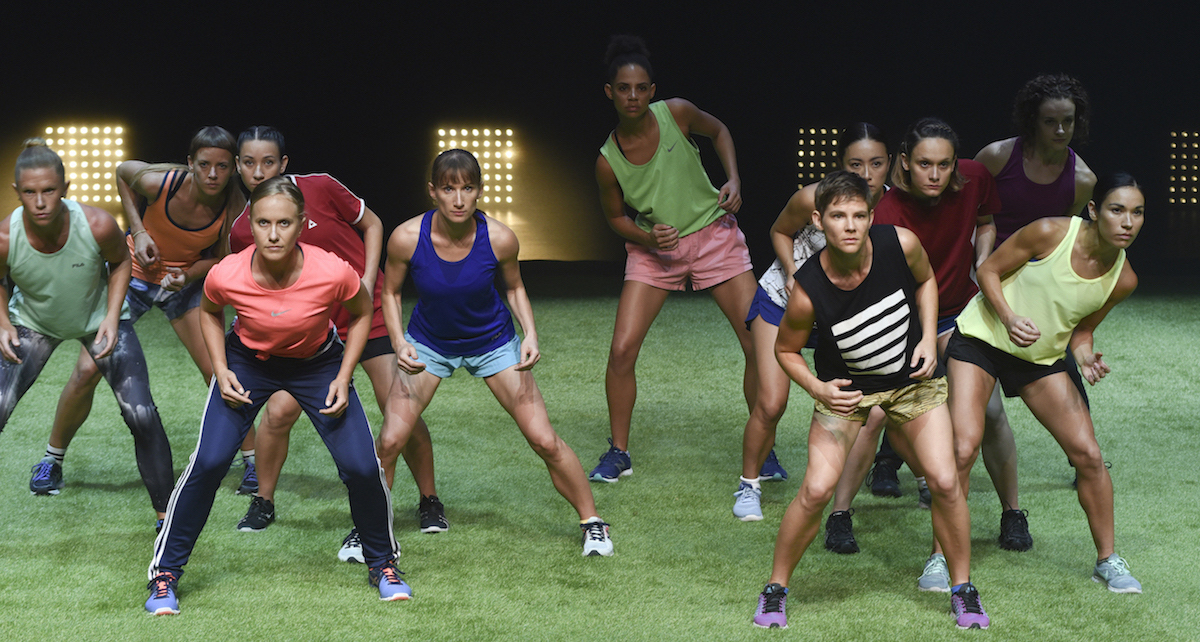 I had been anxiously awaiting this – Champions, presented by Form Dance Projects as part of the Sydney Festival. The idea behind it was excellent — we were presented with information and thought-provoking statistics about gender inequality in sports. The work had a stellar cast of “independent” dance luminaries and a magnificent production team. But for me, it didn’t quite gel. Too many cooks spoil the broth perhaps? 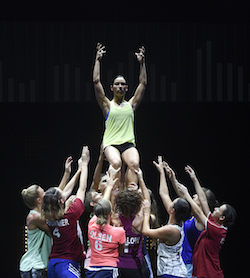 Is it that dance and sport – in this case, soccer and/or football —  don’t mix? (But that is a dialogue that has been going on for ages. Look at the fuss about Robert Helpmann’s ballet The Display, for example.)

Champions is “dance” presented as sport. Five large television screen panels at the back were used for projections, at times flashing vital statistics about the cast (including height, weight, how many grant applications, Helpmann Awards and so on), or sometimes they were used to view the action “from above” or in fast replay. In the second half, Benesh notation was taken and morphed into abstract forms, and another section included stars. At times, the lighting was blinding as if at a major stadium.

The worlds of dance and sport were blended from the start with the use of the swan “mascot” (Julie-Anne Long), who was a cross between the standard sports mascot (in this case, perhaps the Sydney Swans), in thick swan overshoes, using a dry ice machine, but also with major references to the iconic ballet of Swan Lake, with snippets of port de bras from that work — the “arms crossed on tutu” pose and allusions to the cygnet pas de quatre, and also references to the Mikhail Fokine’s The Dying Swan.

The amazing team of extraordinary female performers were all in casual sports clothes, each with their name and a team number on the back.

Martin Del Amo’s choreography was, at times, tight and precise, and extremely controlled. Soccer drills, pre-game warm-up rituals, tactical examination and on-field victory dances were blended with contemporary dance, Pilates, yoga and gymnastics. There was lots of running and stretching, especially in the work’s first half. There were synchronised sculptural movements. The lineup with golden pompoms during a voiceover about gender in sport was most effective. There were group huddles, jumps, turns and high-fives. Lunges, stretches and rolling floorwork were included, and there was a use of marvellous, creamy épaulement throughout. 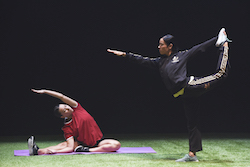 Sometimes, while still as part of the group, each team member had a set repeated phrase of movement.  At times, the group performed very complicated patterns on the field. But all is regimented; there are no breathless chases up the field or wrestling for the ball, not even an imaginary one. Toward the end of the piece, there was an extended sequence in which it appears the team, while apparently victorious, had lost (or is it just the winding down?). There are some very tricky and demanding catch and falls.

As an attempt to develop the contemporary dance audience, yes, Champions seemed to be successful; the rest of the audience apparently really enjoyed it. But sports fans perhaps wouldn’t laugh at the same jokes and probably would expect much more explosive action. Dance lovers, however, have the hidden subtleties and many layers of meaning to analyse and enjoy to a degree.