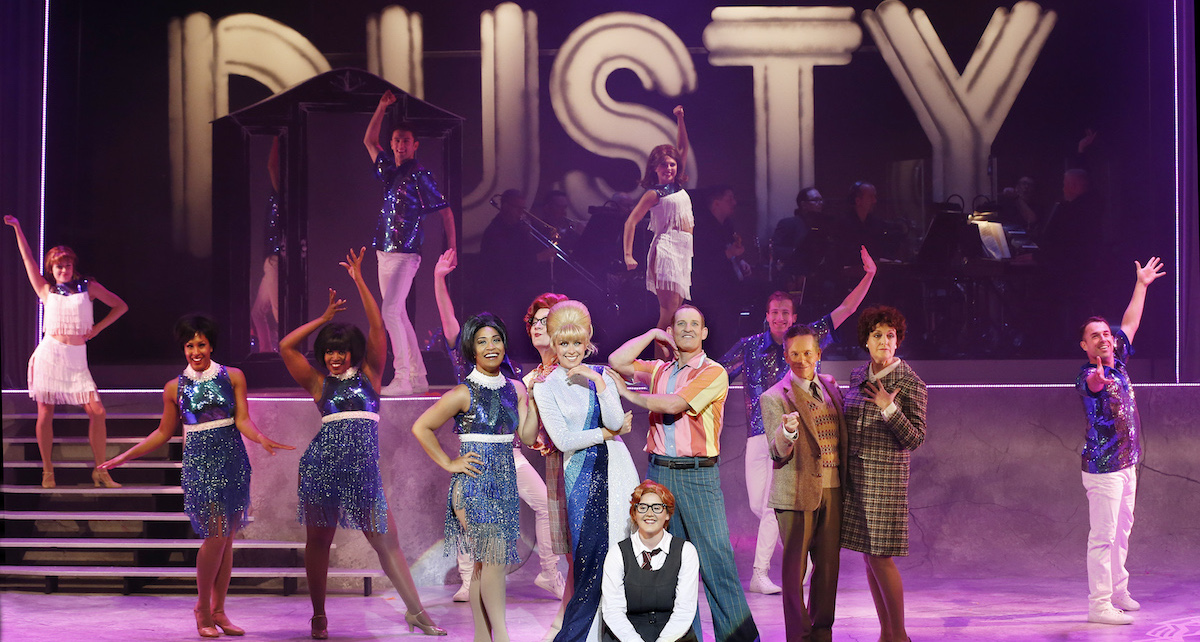 Is it “Son of a Preacher Man”, “I Only Want to Be with You”, or maybe “Wishin’ and Hopin'”? What’s the first tune that pops into your head when you think “Dusty Springfield”?

For Baylie Carson, who plays the young Dusty in the hit musical opening in Adelaide on New Years’ Eve, it’s “I Just Don’t Know What to Do With Myself”. It was Dusty’s first solo recording and a massive hit.

“I remember singing it around the house when I was little,” Carson reveals. “I didn’t really know what it was, but my parents listened to it.”

Carson describes how she loves Dusty’s soulfulness, the richness in her voice and how she used emotion to tell stories.

“She is a craftsman with her voice,” Carson says. “Her inspiration came from her early jazz roots, from listening to Doris Day growing up, listening to her father play piano and from Italian opera. And when she sang as Mary O’Brien, she sounds like she was a blues singer.”

Before scoring the role of the young Dusty, Carson knew a little about the pop icon and loved her songs, but in preparing for the role, she discovered the fascinating story behind the flamboyant woman with the peroxide blonde bouffant.

“She had a difficult life,” Carson shares. “She was a lesbian in times when that wasn’t acceptable, and she was part of a mixed race couple. She was in love with blondes like Doris Day, and that’s why she created Dusty as this…being…that was basically a drag version of blondes like Doris and Marilyn Monroe.”

Carson’s voice is earnest when she speaks about discovering more about the person behind the Dusty facade, especially the early life, when she was Mary O’Brien, which shaped the pop icon she put forward as her public persona.

“Her family treated her like garbage,” says Carson. “As Mary, she was chubby, had short red hair, glasses, not beautiful. Her parents had a son who they put all their love and adoration into and never gave it to her. Her mother was jealous of her talent and wanted to be a performer as well. She had bipolar disorder, which lead to drug and alcohol abuse.”

Carson continues, “She didn’t want the public to know about how her early life was so difficult. So Dusty was a character. Mary said that when she’s on stage she can do anything, but take her off stage and she couldn’t put two words together. She was very shy and a real introvert.”

Carson says she felt a great deal of resonance playing Mary/Dusty, as it wasn’t that hard to grasp how she felt.

“I can’t do public speaking, but give me a song and the chance to be someone else, and I’m fine,” Carson explains. “I’d say I’m an introvert who is very extroverted when I need to be.”

Carson didn’t always know that she would end up working in musical theatre. Her childhood included being on the Australian junior squad for trampolining, she played the flute and saxophone, and when to a musical high school. Then, when she was 13, she did a two-week music camp with Pelican Productions.

“Everyone had to do a solo and audition to go to the camp, and at the end of the two weeks we had to perform what we’d learnt,” Carson recalls. “That became my life from 13 onward. I did it every year and met all my current friends. The heads of the company came over to Melbourne to see the opening of Dusty because they are my family. My life revolved around auditioning, doing camp and mourning the grief of it being over.”

In describing what she loves about musical theatre, Carson is effusive. “I love the freedom of being able to be free on stage and singing,” she says. “It’s my favourite thing on the planet. I still can’t believe it’s a job! That’s so bizarre that I’m actually working in something I love so much. “

And Carson describes Dusty as the highlight of her career so far and the most she’s ever learnt in her life. “Because the role was based on a real person, I researched a lot,” she shares. “It’s hard because I’m paying the young version of Dusty. I’m Mary O’Brien, but she didn’t really want people to know who she was, so it was hard to find information. I looked at how she moved as Dusty and tried to work out who she was by that. “

She continues, “With any character, even a fictional character, there is always so much you can find and you can make real with musical theatre, so when you get into a song it doesn’t just burst into song. You’ve justified it and given these reasons, and so it’s like the character has to sing because the emotion is so heightened that that’s how they have to express themselves.”

And Carson has learnt far more than the background that shaped the persona and career of Dusty Springfield.

“Over the six weeks we were in Melbourne, having the most supportive cast and creatives, I have gotten a lot more confidence in myself, especially as a performer,” Carson reveals. “I have grown as a human being so much in the last six weeks that I can’t believe it. People say I seem different. I say that I think I’m learning to accept myself. I’m not sure if it’s the role in particular; it’s also the people around me. The cast and the work putting in the role and believing in myself to do it. The whole experience has slowly helped me. It’s even been sharing a dressing room with Anne Wood, who played my mum, and she’s been in the industry for years and I’ve looked up to her my whole life. She’s done every role that I adored; it’s been amazing.”

She also cites working with Australian musical theatre royalty Todd McKenny as being one of the best things to come out of the role of Mary in Dusty.

“He is so lovely and funny and caring,” says Carson. “In my first ever rehearsal, I was like, ‘Oh my gosh, Todd McKenny!’, but he is such a human being. He is so down-to-earth. It’s been amazing watching him. He had no inhibitions in rehearsals. He was free to play and create this character. He wasn’t nervous and insecure, and he threw caution to the wind.”

Carson is an Adelaide girl, and she admits she is excited and terrified about doing the show in her hometown. She admits, “I’ll probably cry or nothing will come out on opening night. Even just standing on the Adelaide Festival Theatre, where I saw everything growing up. “

But it’s more than just the iconic festival theatre that makes it special for Carson.

“It’s the whole place,” she adds. “It’s where my life started. Every part of Adelaide is nostalgic. It’s my home and being able to perform where I grew up and everything started for me makes me feel warm and fuzzy inside. I feel so grateful that it’s possible. It’s my first professional show, and it’s touring to Adelaide.”

In reflecting on her next steps, Carson reveals that it’s her dream to make a steady career out of musical theatre. And there are plenty of musical theatre people whom Carson aspires to work with and to learn from.

“I love meeting new people and learning where they’ve come from and why and how they perform,” Carson says. “Working with Amy Lehpamer, who plays Dusty, has been a dream come true. When I auditioned, I imagined working with her, and we had coffee before rehearsal and it was like a first date.”

Carson goes on, “She is one of the most centred, mature, talented, grounded human beings I’ve ever met. She went form Once, a folk musical where she plays the violin, to playing Maria in The Sound of Music, a soprano role, and then Dusty with its jazz. I think I admire her because she is learning all the time. Because my character, Mary, becomes her conscience, all I do is watch her. I just get to watch her be a genius actor on stage every night, and I’m in awe.”

Carson’s enthusiasm about her journey becoming Mary is an inspiration to see the show, but Carson shares a plenty of more reasons.

“The dancing and choreography is phenomenal!” she exclaims. “Michael Ralphs, the choreographer, is going to be the next big thing in Australia. The music is fantastic, and it’s lovely to hear the songs in context, and they work perfectly in the story. The actors are phenomenal. Todd and Virginia Gay are hilarious. The direction is so different to what the original was. So even if people had seen the original 10 years ago, it’s cool to come back and see a different interpretation of the show.”

Carson adds, “The show is also kind of heart-breaking. Going in there to get all the emotions out. You’ll laugh, cry and be in shock in some parts of the show. There are some pretty full-on moments in the show. That’s what’s so freaky to me — because things are happening, and you realise it was actually real and it really happened.”

Carson concludes by sharing that one of the most important lessons she learnt from Dusty was to believe in yourself and believe in what you can do.

“I think she always sought out external validation to feel better about herself, which I am like as well to some extent,” she says. “She often said that she was still in search of her sound. So I think it’s because she never knew who she was really that I learnt so much as a person. Just believe in yourself. It’s that simple.”

Dusty the Musical will open at in The Festival Theatre on New Year’s Eve and runs until 22 January.  Tickets are available from BASS 131246 or bass.net.au/events/dusty-the-musical.