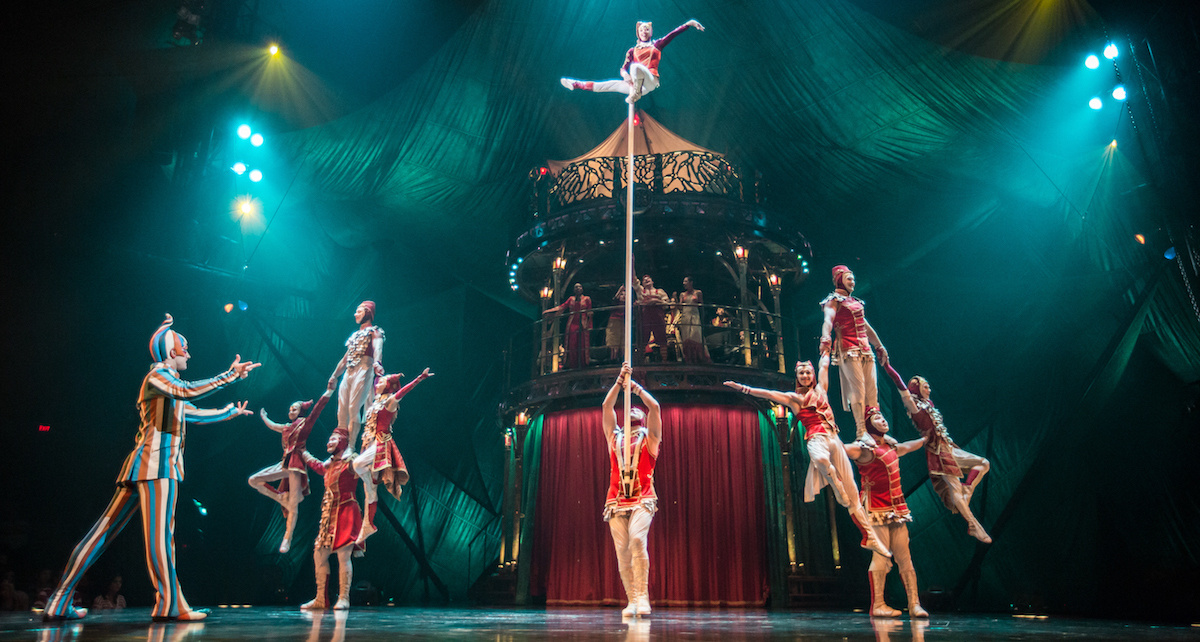 Cirque du Soleil’s eighth big top show to tour Australia, KOOZA, has been packing houses and racking up plaudits since its Sydney opening in August. So popular has it proven with fans that its upcoming Melbourne summer season has been extended by four weeks. Although we are used to Cirque’s numbers being impressive (thousands of performances in dozens of countries with millions of punters), sometimes we miss the smaller, individual details amidst the death-defying spectacle and acclamation. 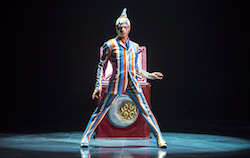 Mike Tyus as The Trickster in Cirque du Soleil’s ‘KOOZA’, with costumes by Marie-Chantale Vaillancourt. Photo by James Morgan.

Take Seattle-born, LA-raised dancer-turned-circus performer Mike Tyus. He is returning to his role as The Trickster in KOOZA after a four-year stint back in the world of contemporary dance. However, his is not simply a story of an artist working between two worlds but of significant serendipity.

As he explains, “I was born with a disease called Blount’s Disease, which causes irregular growth in your legs and I was playing soccer a lot and doing gymnastics and experiencing great pain, and so I had surgery to fix the irregularities. For physical therapy, my parents brought me to dance, and that’s where I fell in love with it.”

Thus it was that an athletic kid became a teenage dance nut and then, after auditioning for Cirque at the ripe old age of 18, ran away with the circus in 2008 to become The Trickster in KOOZA. “By golly, I’d never thought I’d be here,” he says with a wry, knowing chuckle.

Having just turned 27, Tyus now finds himself combining his sporting prowess, dance skills and circus nouse every night on stage. The discipline of dance, however, wasn’t always an ideal grounding for life on the road with Cirque. “One of the problems I first had when I came to Cirque was I was so dance obsessed, that’s all I wanted to do,” he recalls. “So I tried to fit all of my dance vocabulary onto the stage; but now with a bit more time and experience in theatre, I’m going about it in a very different way.”

Given the highly narrative nature of KOOZA, it is perhaps not surprising that an accidental dancer should have become a chance actor. Set in the world of circus, KOOZA’s trajectory follows the journey of a mime called The Innocent into the beguiling and morally ambiguous world of the carny, a place where he meets such characters as The Mad Dog, The King and The Trickster.

It’s a fair distance creatively from the less linear modalities he would have employed in his contemporary dance life with The Urban Poets and Pilobolus Dance Theater. Indeed, according to Tyus, “When character comes first, you have a lot more to play with, and the world kind of opens up for you. Dance can be a little bit two-d, but when you act with an idea or an intention on top of movement, it really brings things to life.”

Working with Cirque du Soleil from 2008 not only caused Tyus to re-examine the limits of his practise but also gave him fresh impetus when he returned to dance in 2013 with Pilobolus. As he now understands, it was the classic “less is more” thing. “I really stripped away all of the hubbub and vocabulary that I thought I needed as a dancer,” he admits. “It deepened and thickened my skill level when it came to performing. I just learnt to be on stage in front of 3,000 people a night and lead them through a magical experience.” 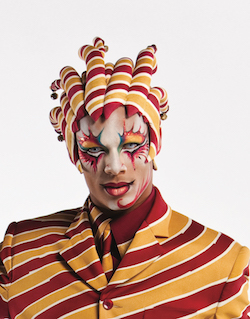 Mike Tyus as The Trickster in Cirque du Soleil’s ‘KOOZA’, with costumes by Marie-Chantale Vaillancourt. Photo by Matt Beard.

Tyus has been on an incredible, twisting journey since the pain of playing soccer as a boy became unbearable and sent him into full-scale reconstructive surgery. He’s toured the world, performed at the Academy Awards and now landed in the Australian summer.

That said, living out of a suitcase will always have its issues. “You can definitely get lost in your own little world and get mad over the stupidest things,” he states. “But then you realise how incredible you’ve gotten it and where you are in your life. It really brings me back to being grateful.”

It all makes Blount’s Disease seem a long way off and, as he says it, “Choosing to deal with pain has taken me further than I could possibly have imagined.”

KOOZA is currently being presented in Brisbane. Following Brisbane, KOOZA moves to Melbourne from January 20 and then Perth from April 13. For all tickets and information, go to www.cirquedusoleil.com/kooza.