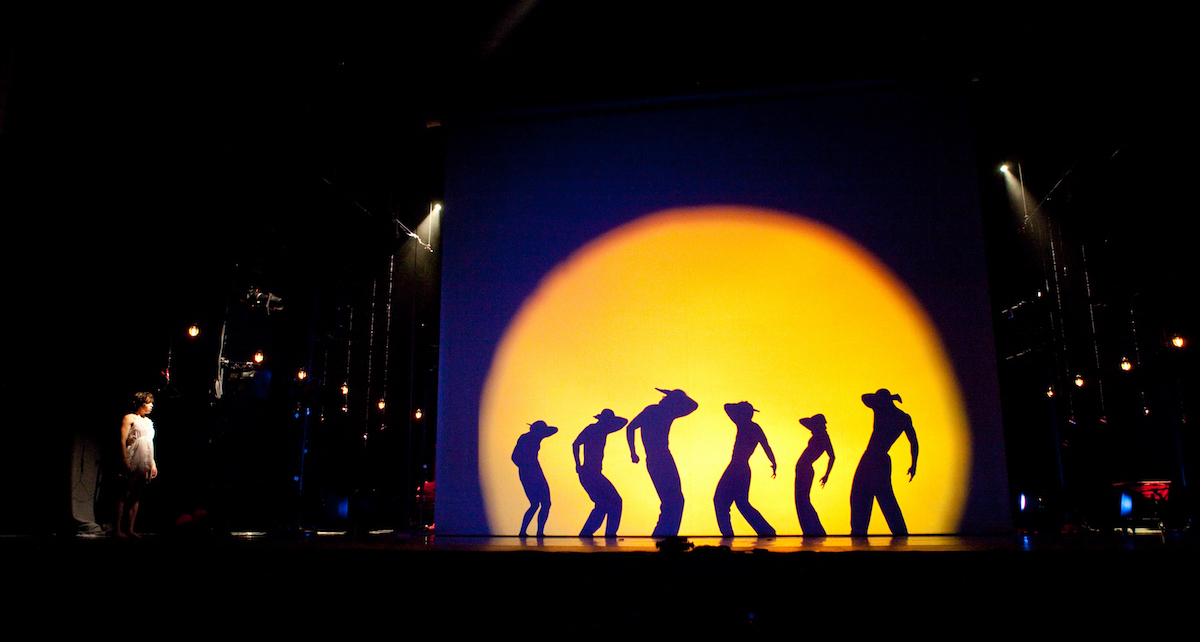 Pilobolus’ Shadowland was an absolute theatrical treat. With the company’s unique performance style and movement vocabulary, Pilobolus, who takes its name from the biological “phototropic (the growth of an organism that responds to light) fungus that thrives in farmyards”, sees itself as constantly “growing toward the light”, an apt name for this company. Pilobolus always take its audience on a fantastical journey into the world of surreal imagination. With its mix of shadow and non-shadow theatrics, the troupe has not disappointed with this show. Even upon entry to the theatre for Shadowland, the atmosphere is set with beautiful vintage clothing hanging from the ceiling, preparing the audience for a mysterious adventure. 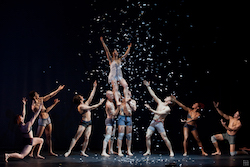 Shadowland is the story of a young teenage girl, who is entering the stage of life when she wants to explore a more grown-up world, and the quirky dreams of sleep that she encounters as a result of her conscious fantasy. Upon falling asleep, she is whisked behind the screen into a fantastical dreamland and adventure. Starting off being chased by three crazy chefs, which evoke simultaneous illusions of terror and humour, her deep sleep phase follows. Here, she dreams that a god-like hand changes her into a human with a dog’s head. She subsequently goes on an adventure as this creature, and experiences all the joys and heartbreak of being someone living in a more “left of center” journey than the normal human experience.

Shadowland is a beautiful piece of theatre that explores its thematics in a manner reflective of independent theatre, with a few bold statements made about the human experience being a little different from the norm. Disappointingly, these statements were not resolved in any strong manner that satisfied the effort gone into portraying them as key themes.

There was some beautiful movement, not drawn from the vocabulary of any particular movement language but instead created in collaboration with the performers and their main technical medium of lighting, in short shadow form, to create a beautiful display of shape and story. Interspersed throughout were some beautiful moments of Pilobolus’ unique form of partnering and weight-bearing, to create some quite magical and surreal moments. The dancers’ unique way of moving through the space is certainly something that any physical performer can draw inspiration from. It was refreshing to see such an organic way of moving without stylistic inflections drawn from another vocabulary. 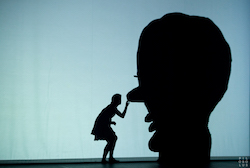 Simple costuming and props were perfectly complimentary to the major feature of the lighting and the framing of the shadows. Singer-songwriter David Poe’s lilting soundtrack is reminiscent of a movie underscore and assisted in the story-telling as much as any member of the cast who performed live.

It was delightful to see the company’s signature piece to Alicia Keys’s “New York” as the encore performance, and a surprise tag — Men At Work’s “Down Under” — as a unique Sydney-themed performance to top it off. The encore was the highlight of the show, moving faster and with more excitement than the main body of work, and it was delightful to see a piece of home, creatively placed within an international work.

It is a shame that the season was so short for such a unique performance. It would be good to see more of a demand and support for these kinds of performances in Sydney so that as local artists, we are feeding our own artistry with a broad range of varied experiences.

Don’t miss your next opportunity to view this long established and unique company, as its work is always a thrill and an inspiration!