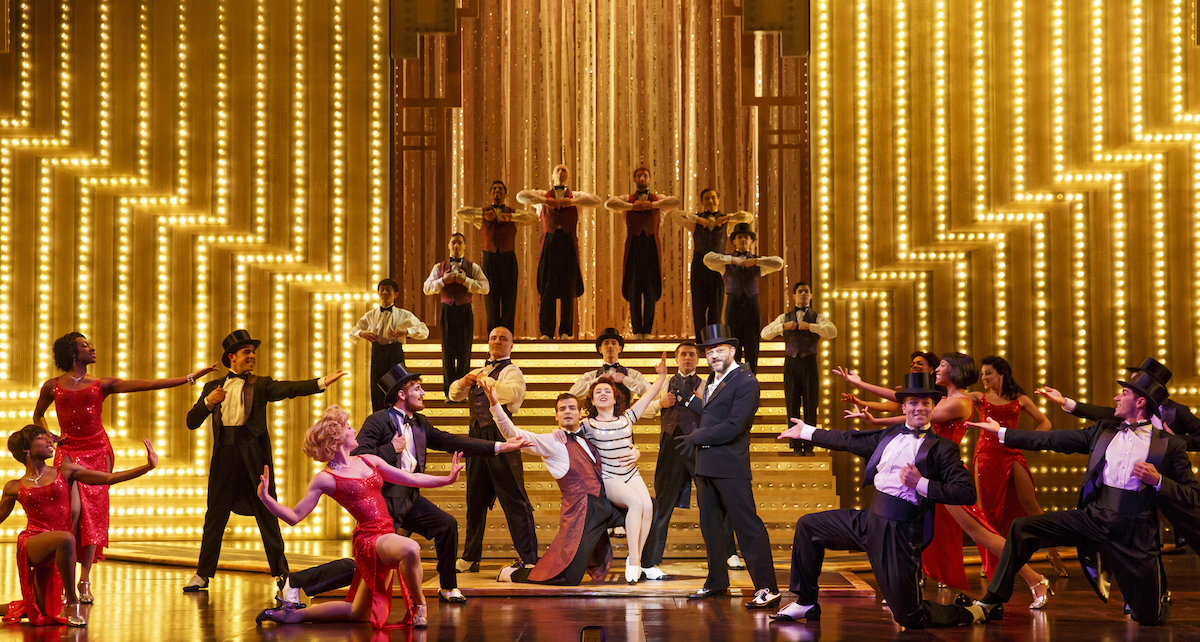 Don’t run away with the circus; find the circus on Broadway instead! That’s just what Sydney performer Sheridan Mouawad has done. She’ll be making her Broadway debut in the Cirque du Soleil’s first production created specifically for the Broadway stage, the musical Paramour. Paramour tells the gripping tale of a beautiful young actress forced to choose between love and art in the alluring world of Golden Age Hollywood. It brings together music, dance, a love story and professional actors, marrying these elements with Cirque du Soleil’s signature aesthetic and world-class acrobatic displays.

Sheridan speaks here with Dance Informa’s Grace Gassin about her fantastic achievement and what it takes to make it on Broadway. 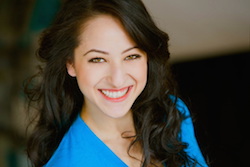 Congratulations on getting the opportunity to make your Broadway debut in Paramour! Can you tell us more about your role in the production and what audiences can expect?

“Thank you so much! I am ecstatic about this amazing opportunity that has come my way. In Paramour, I have one of the singer/dancer/actor roles. I cover multiple genres of dance, from the theatrical to the contemporary and even some good old country. I also cover two feature ensemble roles, Gina and Lila. The audience can expect the best of all worlds as acrobatics, singers, dancers and actors come together in a show that incorporates all art forms at all times. It’s pretty exciting to see original theatre, and Paramour promises to reach new heights!”

It must be particularly gratifying to be one of the original cast members for this production. Can you tell us a little about what that experience has been like for you and what opportunities you’ve had as a result that extend beyond being a cast member of an established production?

“Yes it is. It’s truly a dream come true! As an original cast member in an original Broadway show, I’ve been extended that coveted prize that all true artists desire in their heart, and that’s freedom! Freedom to create and originate the role you will be performing every night and which you can tailor to suit you and your body.

I found that this process has really allowed me to connect with the piece personally. You go through a nurturing process, a process where you are constantly enhancing and developing your creation until it’s exactly what it needs to be. The difficulty with this, of course, is that you have to recognise when your creation is complete. The lesson I learnt was to appreciate that everything is perfectly imperfect.” 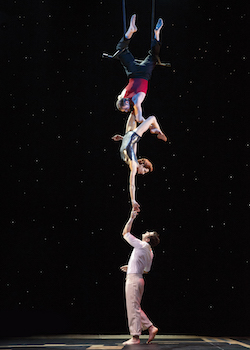 You moved away early to establish your career in the U.S. What drove that decision?

“I remember in grade seven, I had a career counselor who came to our class and told us to write on a piece of paper what our short- and long-term goals were. This was to help us decide which electives we would like to study in high school and ultimately to steer us in the direction of a future career. I wrote on a piece of paper that in ’10 years I want to be on Broadway’. Now in order to get to Broadway, I had to think to myself about all the short-terms goals I had to achieve in order to reach that ultimate goal. That was when I decided to leave that school and enroll in a performing arts school.

Upon graduating high school, I realised that the most important move ahead of me was to make my way to NYC and study in the city of where my dreams lay. I decided to specialise in musical theatre and researched all the different colleges in NYC which I could attend. I got accepted into AMDA, also known as The American Musical and Dramatic Academy, but was also offered a job opportunity with Universal Studios at the same time. I decided to accept the offer for Universal Studios, knowing it would give me life experience, performance experience and the opportunity to save enough money to pay for my education. Since graduating from AMDA, every job opportunity I have accepted has allowed me to progress step-by-step toward my 10-year goal. Now, here we are 12 years later (a little off schedule), and I’m proud to say that I have turned my dream into a reality!”

What is it like living in New York? How does it compare to Sydney?

“The two cities are so different! I have a biased opinion in favour of Sydney because living in a city in which your family is always close by is such a comfort, and it’s just harder when you’re in a big city on your own. In saying that, New York, for me, is exciting, full of opportunities and dreams to be shaped. This was the main reason I left Sydney – I just felt that it was too small for me. I always knew I wanted something greater, to be where theatre history is created.” 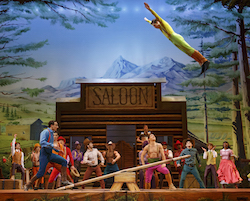 The cast of Cirque du Soleil’s ‘Paramour’, on Broadway at the Lyric Theatre. Photo by Richard Termine.

What is it about the performing life that you love so much? What drives your passion?

“There are so many things I love! I love the performance schedule, having my days off and performing at night; I also love prepping before a show and putting on my makeup, wigs and costumes. It’s like playing dress-up every day! And, of course, the audiences! It’s all about the audience! When you take that bow and hear the applause, it’s a feeling you can’t describe. It’s something you need to experience.

But what really drives my passion is creation. Being an artist and having a creative mind, I’m driven by what I do in the studio or in my own time. Performing is the pay off, but creating is where the magic happens; it’s where we as artists can make a difference.”

Who are your favourite performers? Why do you admire them?

“I don’t have a ‘favourite’ performer, but two actors I do enjoy watching and respect deeply are Meryl Streep and Jessica Lange. They are strong women and extremely dedicated to their craft. I’ve never seen these two actresses fail in anything that they have tried to accomplish. I admire loyal and committed actors for their work and passion.”

In other interviews, you’ve talked about how you pray and always remind yourself to stay confident when you walk into auditions.  That sounds easier said than done. Can you tell us about particular moments when you’ve felt more vulnerable? Why did you struggle personally in that moment? How did you work through it?

“Yes, it is easier said than done, that’s for sure! There are many moments in which I’ve felt vulnerable, but there is one situation I recall above all others. When I was hired for Rock of Ages, I was given the lead role of Sherrie to understudy. Now, one of her songs required me to belt out a high F, which is a note I had never approached before with confidence and security. Every time we had understudy rehearsal, I was unable to fully voice the note, as I was always too afraid. I eventually realised that I needed to get out of my own head and stop being so afraid that my voice wasn’t good or strong enough.

In order to grow from the experience rather than let it bring me down, I began to rehearse and train my voice every day to reach those notes safely. I would even come in early and sing the material on stage in the spots where the character would be standing, so that when the time came when I would eventually have to go on for her, mentally, I would know that I could hit the note with confidence having done it many times before standing in the exact same spot. This was definitely one of those moments in my career in which I felt extremely vulnerable, and it took me five months of improving myself physically and mentally before I felt comfortable, confident and ready to perform. Everybody has their own roadblocks, but it’s how you overcome them and turn those difficulties and insecurities into strengths that matters.” 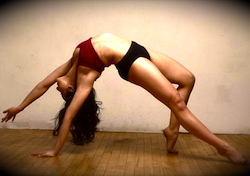 The industry is becoming more competitive every day — apart from being a ‘triple threat’, what do you think are the skill sets that are really distinguishing performers who get jobs from those who don’t these days (or that you think will do so in the future)?

“In our industry, there are so many factors that go into being hired that the artist has absolutely no control over. This is why you have to love performing to be a part of this industry, because rejection is 80 percent of it. In saying that, I have realised that there are minor distinctions that separate trained performers from passionate performers, and performers with a mixture of both. This is the key!

Confidence shines through and allows the person hiring you to also feel confident that you are going to be easy to work with and perform their work the way they want it. For dancers especially, I find that quality of movement when dancing is particularly important. You can always tell the difference between trained dancers who just perform steps as ‘steps’ and the dancer who will transition perfectly into every step, maximising their strengths with the least amount of work. These are the dancers you can’t take your eye off because they seem effortless and breathtaking.

It’s not about being perfect anymore; it’s about being in tune with your body, understanding your strengths and weaknesses, and being smart about how you can form whatever you are given into something that accentuates your unique qualities. This is what will make you stand out from the crowd!” 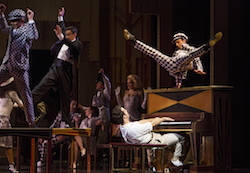 The cast of Cirque du Soleil’s ‘Paramour’, on Broadway at the Lyric Theatre. Photo by Richard Termine.

What advice would you give to a young performer wanting to follow a similar path?

“I would tell them to stay focused and constantly remind themselves of where they are headed. The path that everybody takes to reaching his or her dream is different, it’s just a matter of staying determined.

Continue to work on yourself, no matter where you are in your career. You will come across obstacles that will either break you or allow you to grow. Take these moments as opportunities to improve yourself as a performer and artist.

Surround yourself with people who support and love you and with others who want the same thing as you. Healthy competition is always good to keep a young performer determined and constantly improving.

Finally, believe in the path you are taking. It’s not enough to just dream of your goal. You have to start taking action to turn that dream into a reality. It may take a hundred little steps before you get there, but just keep reminding yourself, every step you take is a little closer to that dream coming true!”

Tickets for Cirque du Soleil’s Paramour are on sale now via Ticketmaster.com or by calling 877- 250-2929. Ticket prices range from $55- $149 (all prices include a $2.50 facility fee). Starting Monday, January 11, the Lyric Theatre Box Office (213 West 42nd Street) will be open Monday through Saturday from noon until 8 pm. For group sales (12 or more), please call 877-686-3805 or email cirquegroups@telecharge.com. For more information, visit www.ParamourOnBroadway.com.

Photo (top): The cast of Cirque du Soleil’s ‘Paramour’, on Broadway at the Lyric Theatre. Photo by Richard Termine.