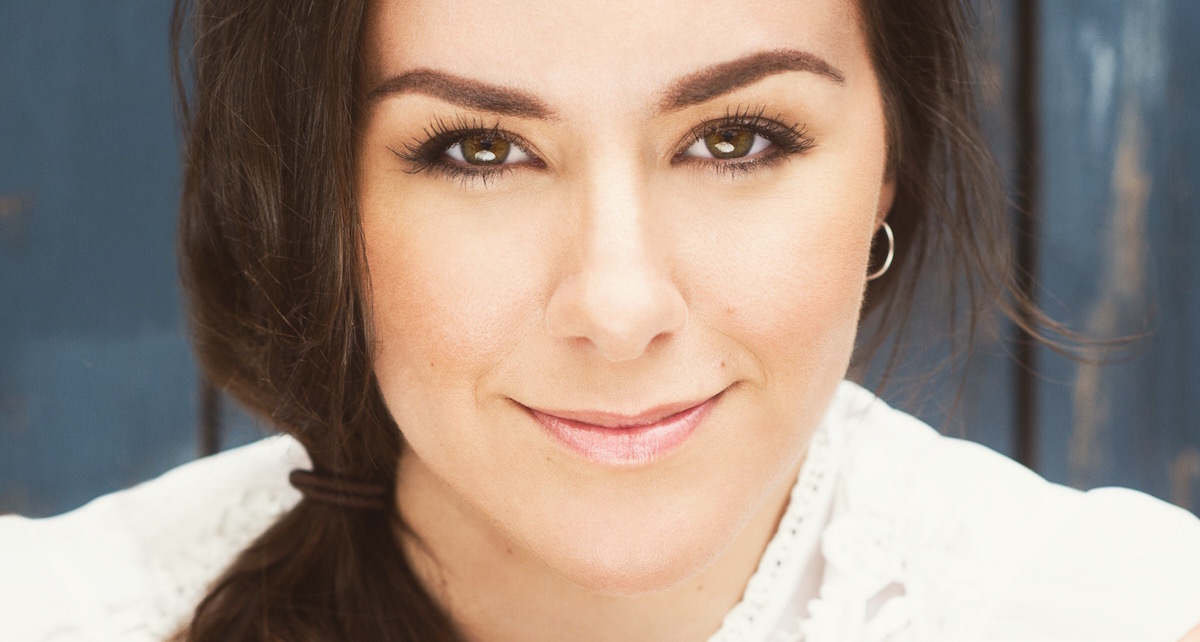 It was over 10 years ago that We Will Rock You the musical first opened in Australia. In the audience was Michelle Barr, excitedly watching her friends take the stage to perform in a show that celebrates the timeless music of Queen. A decade later, with hard work and persistence, Barr is living her dream as dance captain and ensemble swing in the latest production of We Will Rock You, which starts its season on 28 April 2016 at the Lyric Theatre in Sydney.

Dance Informa recently had the pleasure of catching up with Barr during her intense four-week rehearsal period.

The cast of ‘We Will Rock You’ in rehearsal. Photo by Nicole Saleh.

Can you tell us about We Will Rock You?

“We’re introduced to a world that’s in the future called the iPlanet. It’s ruled by social media, and you’re not allowed to have real friendships. Everything is via the internet, and everything is sanitised and there is no freedom of speech, individuality or no personal opinion, so everyone is very clone-like. They do the same things and they’re validated by social media, which isn’t a huge stretch to imagine. Our lead characters, Galileo and Scaramouche, escape that world and break free and decide they don’t want to be a part of that machinery situation. They escape to a small community of Bohemian rebels who still love live music and want to make live music, and they make instruments out of scraps. They’re trying to bring down the empire, the global phenomena that is sanitisation and everything being government controlled.”

Why do you think We Will Rock You has had global success and longevity?

“I think the show has been successful for so long because the music of Queen really is timeless. Older people who grew up with Queen obviously relate to it, and then there is a whole new generation of people who are discovering the music for the first time and are obsessed with it as well.

I also think that it is successful because it’s completely believable that this can happen in our world. We do live in a world that increasingly is becoming dependant on social media and people’s validation comes from ‘likes’. The younger generation especially subscribe to their self-worth based on social media and how they are presented and are portraying themselves. It’s completely manufactured, and I think that’s what this show is about. It speaks to everybody, myself included. I find myself scrolling through Facebook and Instagram for hours, and you’re like, ‘Oh my God, what have I done with my day?’ What the show stands for is having the courage to break out of that and be who you actually are, which is becoming increasingly rare.“

How long has the rehearsal process taken, and what has it been like?

“This is our second week, and we only have about four weeks in the rehearsal room, which is quite fast to get a show up and running. We also have the week of technical rehearsals in the theatre, which is mostly for lighting, spacing and staging, and we get to finally hear the band! During rehearsals, we only have a rehearsal piano, so the day we get to hear the band is always a highlight for everybody. For me especially, I have zero social life during rehearsals. I go home and continue to plot and revise what we’ve done and get ready for the next day.

It’s an intense rehearsal period and quite short and sharp to learn a massive show, especially with so much dance content and the vocals being as extravagant as they are with 12-part harmonies. We’ve learnt about seven dance numbers already, and that’s just in the first act! We’re yet to embark on the second act, so that should be interesting to see how many dance numbers there are, but there is definitely a lot of dancing in this show. I haven’t danced this much since I did FAME (the musical) which was a hard core dance show, and I wasn’t expecting this amount of dancing in this show, but it’s a great surprise. It’s especially fun because there is great singing and a lot of dancing. It’s just high energy!”

What styles of dance can we expect to see in the show?

“There is a whole lot of versatility in the show. Every single song has a different theme or a different vibe, so there are really strong, hard-hitting robotic moves to demonstrate the clone-like qualities of the Ga Ga kids. They grow up in this really sanitised world, so that’s all really strict and very rigid. Then there are the Bohemians who are really loose and fun-loving, and it’s such an energetic and really fun dance vibe. There’s also some sexy and animalistic stuff, so there is a whole range of dance styles in there.”

The show uses the original choreography by Arlene Phillips. What is your favourite piece of choreography in the show?

“It changes every day we learn something new! My favourite now is probably ‘Killer Queen’. It’s a really cool song, and it’s the introduction of Killer Queen. We have canes that we get to use, and it’s sophisticated and sexy, and it talks about her world and how evil she is. It’s playful but also angular, and we use the canes as sword like weapons to articulate it. That’s my favourite at the moment, but tomorrow it might be ‘One Vision’ and the next day it might be ‘Another One Bites the Dust’. We learnt that one yesterday, and it’s quite physically demanding.”

The cast of ‘We Will Rock You’ with Ben Elton. Photo by Nicole Saleh.

How did you start in the industry?

“I started dancing first. I grew up in Canberra, and I had a teacher called Amy Fitzpatrick. I moved to Sydney and went to Brent Street. I did full-time there, and my teachers were my mentors: Jacqui Howard, Cameron Mitchell and Matt Lee.”

What are your responsibilities as dance captain?

“My responsibilities as dance captain are to warm up the cast, make sure that everybody is adequately stretched and that anyone’s injuries aren’t going to be exacerbated by not warming up properly. As well as learning choreography for everyone’s plot and plotting the show, I also help anyone who’s kind of not getting a certain part. Helping refresh the cast’s memories of choreography at the start of the day and going over it, and looking ahead at what we’re going to be learning. When the show starts up, I will watch sometimes, take notes, keep it clean and keep it tight, making sure it’s true to everything we’ve learnt from Lisa O’Dea (Australian Associate Choreographer).”

What is the hardest part of your role as dance captain?

“The hardest part is probably staying on top of everyone’s movements throughout the show. Everybody has different choreography, and there is a lot of opposition work in regards to choreography. Just staying on top of what each person is doing is probably the hardest part, and it’s finding time to learn my vocal lines and my choreography, as well as keeping an eye on the whole show. That’s why there are a lot of us on hand to do that. Once we get into the run, it’s easier to compartmentalise everyone’s plot, and everyone is tracked throughout the show. But initially in this process, it’s staying on top of the entire picture, and that’s challenging!

To do this, I film a lot, write copious amounts of notes, and I have an app on my iPad called Stage Write. It was made specifically to keep on top of positions in a show, and where people move in relation to whom, what props they use, who they enter and exit with, and if there is any interaction that’s of note. So when the swings go on, they are prepared and equipped and won’t cause a catastrophe.“

What do you enjoy most about being part of this production?

“The most enjoyable part for me is definitely once the show starts, and as a swing performer getting to jump in to different roles each time someone goes off and doing something different every time. As an ensemble swing, it means if someone goes off, one of the swings will go on in their place, and getting to do a different role and a different plot every night or every week is truly terrifying, challenging and thrilling as well! I cover the entire female ensemble, which is nine girls, plus I also cover Oz played by Jaz Flowers and Killer Queen played by Casey Donovan. I cover a total of 11 roles all at the same time, keeping an eye on what the guys are doing so I can help anyone, or making sure that I know what the choreography is, so if anything needs to be tweaked or fixed in conjunction with Siobhan (resident choreographer), we work together to do this.”

What is the next step for you in your career?

“I have done dance captaining for awhile. I truly love it and love the benefit of being on stage and off stage and having my feet in both pools. In the future, perhaps I’d like to do some resident choreography when I’m too old to kick a leg, stepping behind the scenes. I really like the producing side and being on the creative team as well. I recently did some producing work for television, and I really loved that. I think my experience in the performance world benefits that side of it as well. It’s great to have that perspective when you step behind the camera or the stage.”

What advice would you give young Australians wanting a career in musical theatre?

“My advice for anyone growing up who wants to be a performer is to work their butt off! It is a really hard industry to crack, and I feel today, especially with dancers, that kids are very quick to choose the niche that they want to focus on without other possibilities. Everybody should be doing every style possible. Do singing, do acting, do tap, do everything because the window of opportunity will only get bigger, and by limiting yourself to one style or one genre it really decreases your chances of having a long and successful career. You might have a minute of success, but then if you can’t do what’s required for the next job, that takes you out of the running.

So my advice is to do as much as you possibly can and keep your options open, and don’t limit yourself and just keep going. It’s about perseverance. You get one ‘yes’ to every 100 ‘no’s, and that’s the truth. It sounds cliché, but it’s totally true and you have to have thick skin and you have to persevere!”

For more information or to book tickets for We Will Rock You, visit www.wewillrockyou.com.au.