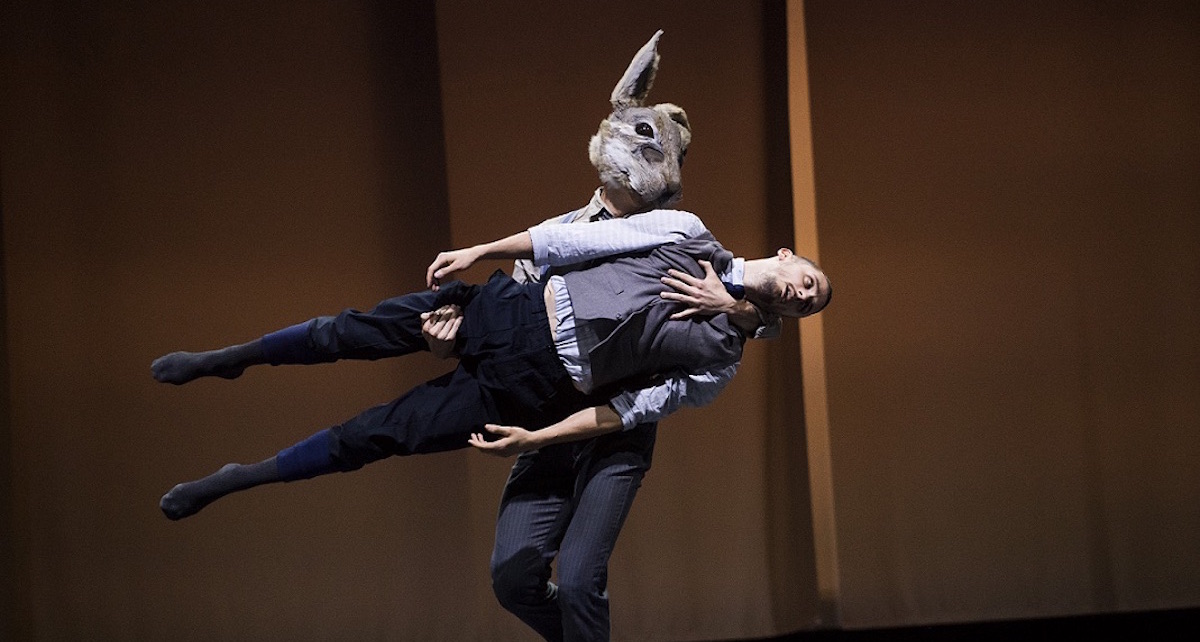 BalletBoyz is an all-male independent dance company made up of 10 dancers. The group’s latest program, performed at Sadler’s Wells, featured two 30-minute works by two different choreographers, Pontus Lidberg and Javier de Frutos. It was a short show, yet a very suitable length for the two very contrasting works. 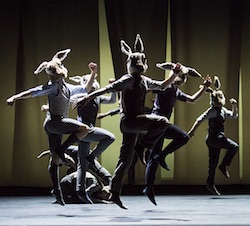 The first piece, Lidberg’s Rabbit, opened with a seamless integration of steps by one of the dancers. While he solo’d, we see a full bunny head and fluffy tail fitted to another dancer sitting on a giant swing (like the swings in Matilda the musical). Soon, they pas de deux together. It’s bizarre but yet intriguing. The work is not theatrical in style; in fact, the colours are like the CBD on a drizzly London day.

It’s not children’s entertainment or a fantasy like Alice In Wonderland, and yet the bunnies increase in number and are perfectly paired with the unusual music “Kleines Requiem für eine Polka” by Polish composer Henryk Górecki. It left me wondering what Rabbit was about, but I think that was the point — a little left-of-centre in theme but still plenty of room to wonder, interpret and see some some really interesting choreographic moments, particularly the repeated, regimented movements, almost military in nature. This strength was juxtaposed with fluidity and grace, and BalletBoyz performed it masterfully.

The second piece was the highlight for me. Choreographer Javier de Frutos was genius as he had his dancers fly, spin, lift and handstand around the centrepiece of a movable ballet barre. With the men dressed simply in rehearsal clothing, the piece aimed to explore our reactions to death and, in this case, de Frutos’ own fictional death, hence the piece being titled Fiction. Three narrators (Imelda Staunton, Sir Derek Jacobi and Jim Carter) read a obituary voice-over, or more of a biography of his life and, in particular, his choreographic career highs and lows. 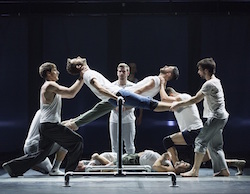 The BalletBoyz in ‘Fiction’. Photo by Tristam Kenton.

There was non-stop excitement and risk as the dancers moved to the dialogue and repeated movement as the narrators spoke in canon sections of the text, a somewhat reflection of life as a rehearsal and, in this case, de Frutos’ life spent painstakingly creating and rehearsing his works in dance studios. The obituary described de Frutos’ life with brutal honesty and praise, even mentioning an earlier review from the Arts Council stating his work to be “the biggest load of crap they’d ever seen” and how he had suffered a nervous breakdown after receiving death threats for one of his controversial works. Amongst the heaviness of that, however, were many moments of humour.

Truly, it was an inspiration to watch choreography and such innovative and expressive movement. The themes in Fiction could have been really cheesy, but the movement demonstrated some of the most thoroughly entertaining contemporary dance I’ve had the pleasure to witness.