Sydney’s Carriageworks is the ideal performance space for some of Sydney’s new breed of emerging choreographers. In this massive Victorian-era converted railway workshop, four young choreographers were able to workshop, flesh out and showcase their choreographic ideas with the dancers from Sydney Dance Company (SDC).

A balanced, diverse group of work shares the stage for this, the second annual edition of New Breed. 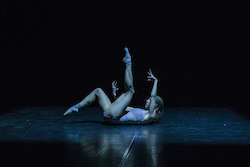 The audience is treated to the eclectic and the unexpected, the humorous and the poignant with some demanding moments where stillness and absolute attention is required. Each of the works show a distinctive style and vision, and it is heartening to see each work demonstrating a thoughtful search for a unique creative style.

Bernhard Knauer’s opening work Derive is a short, lyrical meditation on a musical score composed by his father, Jürgen Knauer. At the world premiere of New Breed in Germany, in November 2015, Knauer’s father and brother performed the music live.

Using only four dancers, Knauer’s choreography involves intimate counterpoints with the dancers’ arms resembling a bow with arrow being drawn, contrasted by a strongly grounded, almost sumo lower body. Despite the shapes being almost oriental in style, their poise and lightness have a contemporary western feel. Illuminating small blocks of the dance space adds to the intimacy of this self-contained and very personal piece.

Kristina Chan’s piece, Conform, showcased her determination to push boundaries and explore contemporary themes rather than use choreography to “paint pretty shapes”. Creating a work exclusively for male dancers, Chan explores the role of men in society, with the usual ingredients of conformity versus individuality, segregation and power struggle. Much of the dance is dense, dark and concentrated, containing masculinity but also sensitivity and poignancy, balance and boldness. 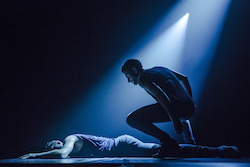 The opening minutes are heavy with silence as the men stand immobile before an unseen force field, which slowly weighs heavily on their chests, and they crumble.

Throughout this work, many movements strongly echo martial arts, with some grappling sequences looking like a mixed martial arts’ event. This would perhaps suggest that conformity for men is closely intertwined with the twin themes of functionality and rational use of the body.

This dark piece contains many challenging and memorable aspects. In its determination to provoke the audience with a sinister, heavy a-tonal score, at times it also raised the question of “where does the distinction lie between dance and physical theatre?”

Well-placed to follow this dark and daring piece, Fiona Jopp’s So Much, Doesn’t Matter provides some light relief for the audience.

Throughout this work, the 18th century song “Greensleeves” plays on loop across a variety of versions as we are taken on a Shakespearean-style romp of pleasure and pain. There is plenty of zany frivolity and raunchiness, followed by the contrasting tragedy and pathos.

Quite ditzy, with the clever use of colourful silky skirts, Juliette Barton and supporting dancers embrace the debauchery and sexual innuendos with élan and the required bravado. Jopp had made the comment in a recent interview that the ideas for this piece started over a winey dinner with friends…and one did have the impression that the rather raw concepts and their un-subtle realisation were those of a youthful creator with untapped potential. 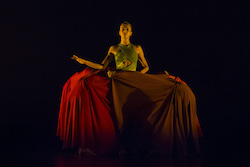 Beautifully presented with a mesmerising, ethereal mood, the dancers embody the irrefutable connection between the earth and its habitants. An enjoyable and well-constructed piece, it would seem to lack an individual signature in the choreography and overall staging.

A counterpoint to the individual creativity of each choreographer is the versatility of the Sydney Dance Company, who showcase their capacity to interpret and co-create with the choreographers. Whether being asked for lyricism, musicality, martial energy, zany physical comedy or even indigenous urban street style, the SDC performers effortlessly take it in their stride.

Rafael Bonachela must be commended for his ever-continuing commitment to the development of contemporary dance in Australia. As an adjunct to continually providing exposure to international choreographers, the New Breed initiative, combined with the PPY2016 Revealed, provide a valuable development pathway for local dancers, as well as attract international candidates to Sydney.