Sydney Dance Company’s Pre-Professional Year opened its end-of-year show, PPY15 Revealed, at Carriageworks on Thursday, December 3. As some of Australia’s most prominent choreographers, dancers, directors and producers took their seat to watch the show, it became clear what this course can potentially provide for those who can afford it. The dancers are given the opportunity to impress some very influential audience members and possibly gain employment in this tough industry, maybe even with the exclusive Sydney Dance Company itself. 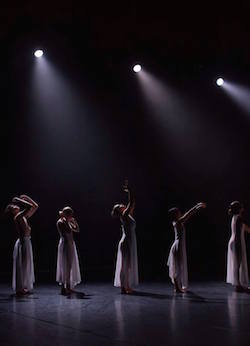 The show opened with Lisa Griffiths’ First Form. Utilizing the full company of 19, the work moved through five distinct movement qualities demonstrated in four very different sections. One section titled “Bounce” required the dancers to move as if their joints were replaced with elastic or rubber. This quality was intriguing and effective to watch when executed well and with integrity. Griffiths noted in the program that her interest lies in the “variability of the human body”, and she was successful in showing the contrasting qualities bodies can make. The dancers should be commended for this difficult task.

From the Feet Up, choreographed by Ian RT Colless, came second in the program and was stylistically different than the first work. This work had more traditional contemporary or modern dance themes, such as a folkloric storyline, long sweeping costumes and technical, classically-based movement. At only 12 minutes long, this work had the potential to be extended to delve more into the relationship between the characters he discussed in his notes and to explore the questions he asked.

Iratxe Ansa’s Lost Body ended the first half. Although the work opened with the male ensemble, the females later joined, and the unisex costuming blurred this line. The females danced strongly, and the males with flexibility were featured. Ansa’s success in this work was exploring physical enquiries. It was 10 minutes of packed movement. Although it was well executed, however, it unfortunately all seemed quite similar.

It is always humorous when a choreographer draws attention to how funny contemporary dance can be. Sara Black credited her dancers as also being choreographers for her work Taction. It began with a solo that vocalized the movements we often see in dance but sometimes don’t understand – my personal favourite: “improv wrestle”. It was a work of dualities; affection which turned into aggression, participants and observers, fighting staged against playing. As an audience member, you are laughing then suddenly engaged with the seriousness of the setting. This was a simple idea well executed. 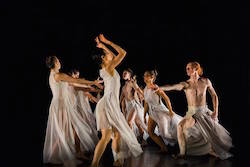 The night closed with an excerpt of Rafael Bonachela’s 2 One Another. It is a big ask to replicate repertoire like this. 2 One Another is an award-winning work that was created on seasoned performers who are phenomenal technicians. It is a relentless work and demands the technical precision to aid with intricate details and fast pace. With the nature of the work, flaws and fatigue are clear. It demands a certain technical and performance maturity that can only be gained with time and experience. Nonetheless, this was a wonderful opportunity for these young dancers to perform a demanding piece of dance.

On arriving to the show, I was determined not to name any dancers as particular highlights. I was aware that it was a graduating performance and like any performance, it may not highlight each individual’s particular strengths. This thought quickly changed, however, after the first few movements of Marlo Benjamin. She is a consistent performer, technically exquisite in both the finer and physically explosive moments. On a night when I’m sure many wanted to impress, it was clear she was only dancing for herself, and this gave her movement quality a divinely effortless feel. She spoke entirely with her movement, which was done so, so well. She was undoubtedly the standout performer.

Congratulations to the Pre-Professional Year of 2015, and all the best wishes for the future!