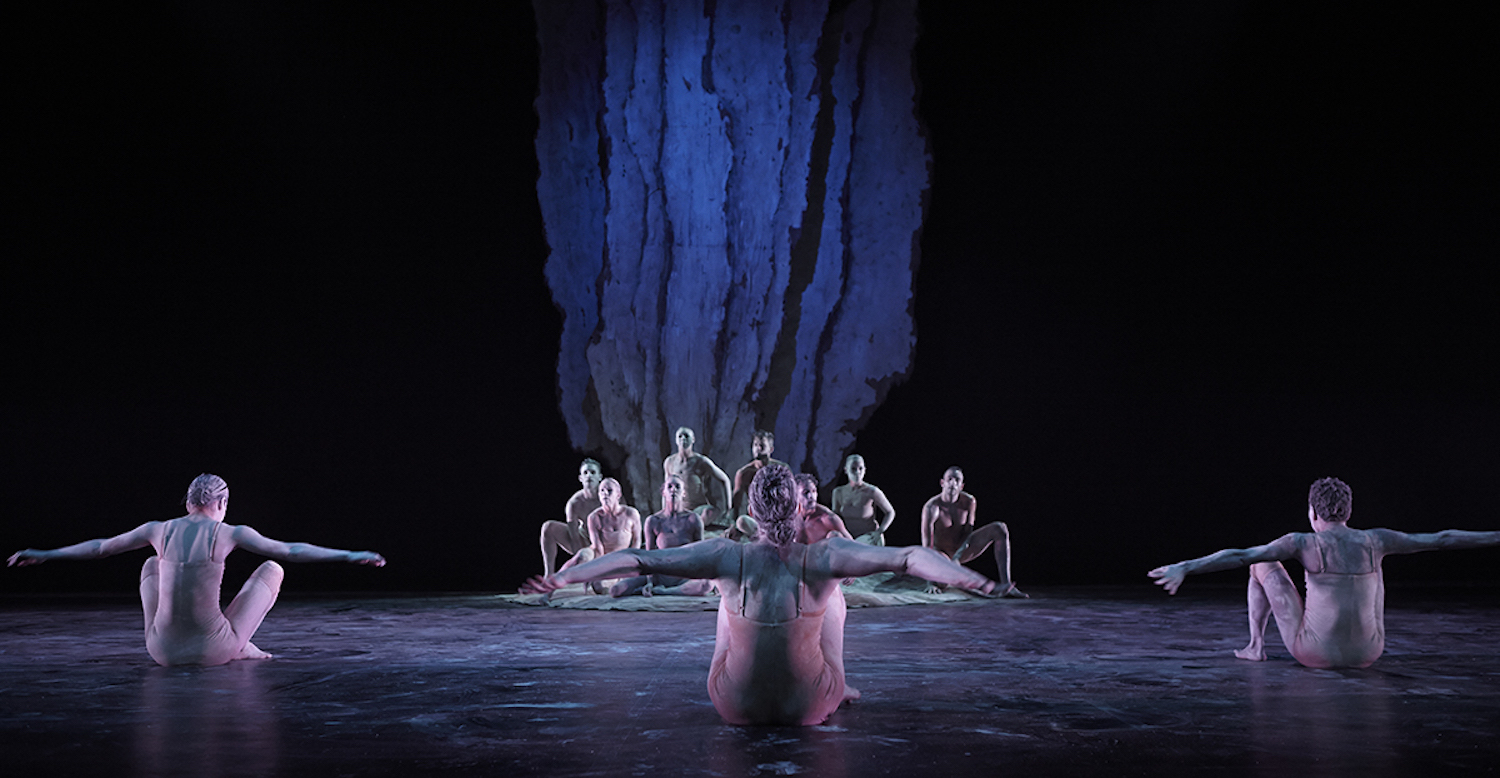 Haunting, mesmerizing and incredibly powerful, Bangarra Dance Theatre’s Ochres sinuously slithers, stamps and jumps across the stage at Carriageworks. Vividly bold and strong with wonderful lighting by Joseph Mercurio, this was originally premiered 21 years ago in conjunction with The Australian Ballet. It is now regarded as a landmark piece and is appropriately performed in Redfern with its links to the company’s roots.

Here at Carriageworks, Jacob Nash’s set is a striking paperbark tree and a curved sandy beach. In the men’s dances of the Black section, spinifex bushes loom and are manipulated, shifted and jumped over. Large shells are used as water, or ochre containers.

David Page’s hypnotic, captivating soundtrack is sort of like “lounge music” at times, humming, beeping, throbbing and combining song, hip hop and speech (in both English and Aboriginal language).

Yellow is the first major segment and is devoted to “women’s business”. Mother Earth is represented by the yellow ochre and women. Some of the lighting is like dappled rock. The women, in long yellow dresses, move in angular, almost alien movements. At one point, they are a writhing group on the beach; at others, they’re like pulsating spiders or perhaps startled lizards. It could be seen as quite steamy, especially with the hypnotic, slithery duo and the plethora of grounded floorwork. Traditional Aboriginal dances (e.g. the kangaroo and a frog-like movement) are incorporated, blending in with the contemporary choreography that demands a very flexible back. After the rain, swimming movements are included, too.

Next comes Black for the men, full of macho energy and featuring a soundscape of birdcalls and speech. The white ochre they wipe across their forehead is for protection during the hunt. Munyarryun is shown as an elder instructing the younger men in spearfishing (at one point, he almost spears us in the audience!).

This is the section with the movable spinifex bushes that are jumped over with lots of whirling turns and very high leaps. There is mock fighting with a martial arts feel, using the spear throwers as well. There are some intriguing, quite difficult lifts and kangaroo poses. Other animal mimicry is also included, as well as a sculptural feline stretch. An abstract phrase of movement – the hand across the mouth – refers to the social dilemma of petrol sniffing, a major ongoing community issue.

The Red section looks at relationships. It is quite different in mood at first, with its opening a fun and flirtatious trio. Beau Dean Riley Smith is incredibly smooth. Yet the tense duo ‘’Obsession‘’ follows, danced by Tara Robertson and Luke Currie-Richardson, with fiendishly demanding lifts and partnering, a disturbing comment on domestic violence. “Poison” in orangey/red costumes is then presented to throbbing, pulsating music, which demands a long, sharp line. Elma Kris and Daniel Riley are full of tenderness in “Pain”, which seems to be about an older woman caring for her dying adult son.

White, the final section, is possibly a bit reminiscent of Graeme Murphy’s Gallery in parts. There is a marvellous, very striking Yutta (“New Spirits”) trio of three ghosts. They seem to be moon creatures.

This section is full of unusual lifts, hops and jumps with an incredible fluid line. There’s also lots of slithery floorwork, and it is also about the observer being observed and the gaze of the performer and audience. The work concludes with a sunset celebration.

Overall, Bangarra’s Ochres is a most striking, captivating and mesmerizing performance.