Twenty-two-year-old Bijan Qutub has an amazing story to tell. Before our interview, I admit I thought it sounded more like a Hollywood movie than real life. Obese, anti-social kid discovers dance and trains with Rocky-like determination until he receives a scholarship to one of the most prestigious ballet schools in the world. And for an added plot twist, the kid is Jordanian and must pursue his dreams despite Middle Eastern cultural norms that discourage and even shun male ballet dancers. It’s the stuff of a writer’s imagination, I thought, and my inner cynic wondered, what’s the catch? 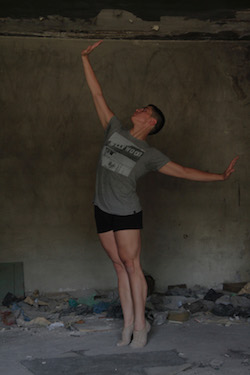 Perched on a top bunk in a characteristically small New York City apartment (the ceiling just inches from his head), Qutub’s striking grey-green eyes shine in the darkness as we chat over Skype.

“I was ambitionless all my life,” he says, “and through dance I found hope. I found something I can strive to perfect every day. It’s never enough; you can always be better at what you do.”

This is the essence of Qutub’s narrative, delivered here and throughout various promotional videos and online forums, most aimed at raising money to support his study at the Joffrey Ballet School in New York City. Though I believe in his sincerity, the words feel formulated, like political talking points fed to him via a teleprompter.

But as the interview continues, I begin to see the goal and appreciate the effort. To fund the Joffrey program and cover housing costs, Qutub has launched a GoFundMe campaign and blasted his story to whomever will listen. The United States Embassy in Jordan awarded him a scholarship, as did Nescafe Arabia, who featured him on their #my_inspiration campaign. Qutub was also a contestant in Lebanon’s So You Think You Can Dance.

Here is a dancer willing to hustle, to say what he needs to say to keep going. And if that means streamlining the narrative, so be it. Because even though Qutub’s story is slick and polished, his success was hard won: the result of determination and relentless dedication sustained by an immense love for dance. 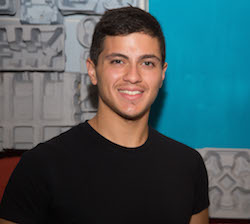 Qutub says dance “saved his life” in more ways than one, beginning with a remarkable physical transformation. Just three years ago at the age of 19, he weighed 300 pounds and was a self-proclaimed video game addict. “All I did was eat and play,” he says. Like many people, he discovered dance on TV when his mother encouraged him to watch So You Think You Can Dance. Qutub was hooked and wanted to learn but had no access to ballet training “in the middle of the desert” where he lived. So he did what any 19-year-old would do in this situation: he turned to YouTube.

“I didn’t want anyone to see me dance,” Qutub says, “being a male and being fat.” So he practised in secret, trying to copy YouTube tutorials by watching his reflection in the window of his room. One day a hip-hop dancer friend said he was going to a local studio to practice, and Qutub went along, staying after to work at the barre. A Russian teacher came in, says Qutub, and was shocked to see a man doing ballet. “Where do you train?” she asked, and he responded, “In my bedroom.” Soon after, the teachers at the National Center for Culture and Arts took him under their wings, and he began training as the only male ballet student in the school and, according to Qutub, in all of Jordan. 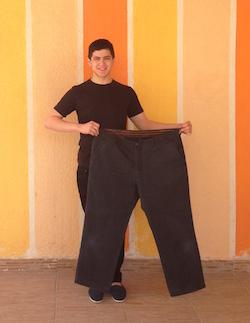 Bijan Qutub holding a pair of his old pants. Photo courtesy of Qutub.

For two years, Qutub’s schedule was grueling: university from 9am to 4pm (he earned a degree in business), as many dance classes as he could take from 5 to 11 in the evening, then the gym from midnight until sometimes 3am. He got about four hours of sleep each night. On stage during performances, he was often laughed at, openly criticized, and even cursed at by audience members. Over the course of those two years, he lost 120 pounds.

The road to New York City was long and painful, but if Qutub harbors any resentment, he doesn’t show it. As a scholarship student at Joffrey, a typical day begins with men’s technique and includes classes in partnering, male variations, contemporary dance and improvisation. He says the transition from being the only male dancer in his country to being in a class full of talented men has been a bit of a shock.

“It’s so competitive here, but I’d rather be here than anywhere else,” he says. “I find it very inspiring to be in an environment of extremely talented people with the same passion.”

In Jordan, Qutub trained under the famed Jordanian dancer Rania Kamhawi, a Royal Academy of Dance certified teacher who Qutub says introduced Jordan to ballet and contemporary dance about 25 years ago. “She cares so much about Jordanian culture and heritage,” he says. Kamhawi gained notoriety by infusing Western styles with traditional Jordanian social dance and folklore, a choreographic approach Qutub hopes to continue after he fulfills his dreams of traveling the world with a professional ballet company. 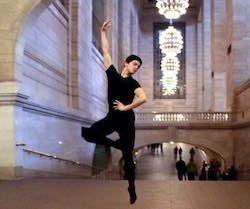 When he returns to his home country, Qutub wants to start his own professional dance company and continue Kamhawi’s quest to make dance a sustainable, accessible art form in Jordan. Because he’s not sure his funding will last for the duration of his program in New York, he says he will make the most of every learning opportunity. At Joffrey, he keeps a notebook and records every correction, every detail, and every combination. “I have a responsibility to teach this one day,” he says.

In the conservative Middle East, Qutub says, “you can only be free in certain ways, and dance is my way to freedom. It might sound crazy, but I believe dance can save the world.”

Keep it up, Bijan. We believe you.

By Kathleen Wessel of Dance Informa.