Those of us in Sydney for the Sydney Dance Company, ACO2 and Katie Noonan joint performance of Triptych have been privileged to see an absolutely stunning programme. Sheer dance magic, it presented a world premiere alongside two works that had been performed before in 2013.

Technically, the dancing was superb, absolutely ravishing. Artistic Director Rafael Bonachela’s choreography required long, laser-sharp legs and lines, a very flexible back and the ability to appear boneless. Some of the lifts and jumps, particularly in the pas de deux, were amazing. Musically, it was also glorious with Benjamin Britten’s music capturing various moods, such as intense, playful, tender and thoughtful.

There was no set, but Benjamin Cisterne’s lighting was marvellous and atmospherically complemented the dance. The orchestra was situated on a raised platform behind the dancers.

Simple Symphony, which opened the programme, was a knockout – absolutely sizzling. In this work, Bonachela demanded many backbends from his dancers, and soft fluid jumps and a flowing line. This work also included some unusual partnering in the pas de deux, with the woman supporting the man. He required a distinctive use of the hands at various points, particularly in the marvellous sculptural quartet. It featured a blisteringly fast pas de deux and seemingly impossible lifts. Two couples – Janessa Dufty and Bernhard Knauer and Fiona Jopp and Todd Sutherland – were sinuous, sleek and bursting with energy in their series of pas de deux.

The delightful Les Illuminations followed with a magnificent performance by Katie Noonan. This work was originally performed at the Sydney Opera House on a long thrust catwalk and has been adjusted for a proscenium arch theatre. It’s a much darker work of betrayal, yearning and loss of innocence. The orchestra played exquisitely and Noonan’s extraordinary voice soared powerfully and vibrantly with Rimbaud’s words. 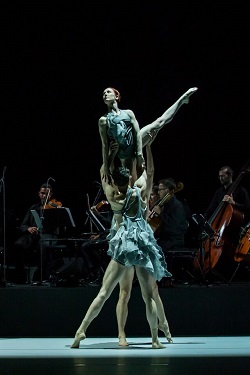 Isolated movements and rippling arms were part of the choreography. Again, there were some amazing and very demanding lifts as the dancers pulsated, scurried and writhed. An extremely acrobatic pas de deux followed a hypnotic, rippling one. For one section, the stage had clean, clear white light for what was an almost Russian school influenced part. The dancers had an incredible singing line. Richard Cilli and Cass Mortimer Eipper brought macho sensitivity and strength to a slinky, steamy duet. Charmene Yap had a mesmerizing pas de deux with Eipper and a notable partnership with Juliette Barton. The body shapes were eye catching and there was exhilarating speed and excitement.

After an interval, The Variations on a Theme of Frank Bridge, Op 10 again demanded almost impossible twists, jumps and lifts and very complicated partnering. Bonachela says that work, featuring the full Sydney Dance Ensemble, fills a gap between the other two pieces. “I think Simple Symphony is very light, Les Illuminations is dark and Variation 10, when you hear the whole thing, has both.”

This work featured an ensemble of up to 10 dancers in the cast of 16. Bonachela required emphatic, spiky arms and in one part had the dancers high-stepping like show ponies. There was also a tango-like atmosphere and a very strong quartet. The pas de huit was fascinating. Plus, Cilli was featured in a dazzling short solo full of melancholy and loneliness. Overall, the work was all lyrical, powerful and hypnotic.

My only quibble with this programme was that I was most disappointed in the costumes for the first and third works. For me, they were most unappealing since the bits and bobs of collars and shoulder pads affected the line of the dancers.