For the first time in its 84-year history, the prestigious Genée International Ballet Competition Final will be streamed online live, allowing the dancers of tomorrow to take their debut steps on an international stage with an enlarged global audience of dance lovers and professionals in virtual attendance. Past Genée medallists, such as Leanne Benjamin or Xander Parish, have gone on to work for some of the best ballet companies around the world.

The live streaming will give online access to exclusive additional content, including interviews and a backstage glimpse behind the scenes of Sadler’s Wells during the intervals. Viewers will also have the chance to cast their vote (via text message) for their favourite dancer to win the Dame Margot Fonteyn Audience Choice Award (sponsored by Freed), download a copy of the Genée programme and see a selection of their tweets appear onscreen.

The Genée, which originally took place in London in 1931, is one of the most celebrated annual events in the dance calendar. It provides an elite launch pad for young dancers and boasts high calibre alumni, including Steven McRae, Céline Gittens and, more recently, Francesca Hayward.

Over an intense 10 days, candidates aged 15 to 19 will experience world-class coaching and ensemble training featuring classic repertoire, their own variations as well as a specially commissioned variation by The Royal Ballet’s choreographic rising talent, Charlotte Edmonds, in the build up to the Final.

Deborah Bull stated, “I’m delighted to be presenting the first ever live streaming of the Final of the Genée International Ballet Competition. Since 2002, the Genée has been travelling internationally and making its presence felt in many different countries. In live streaming the event, the Royal Academy of Dance is taking the next step, opening the doors of Sadler’s Wells Theatre and sharing the next generation of dance talent with ballet fans around the world.” 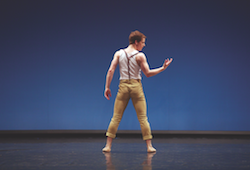 The live streaming is another way in which the RAD honours its commitment to increasing accessibility to the Genée. This announcement follows the introduction of new bursary schemes for 2015. Of this year’s 80 entrants from 15 countries, there are 10 candidates receiving financial support of up to £2,000 to cover entry fees, travel expenses and associated costs. The 10 bursaries have aided access to candidates from South Africa, Indonesia, China, Canada, New Zealand, Australia and the USA, as well as the UK.

Audiences can watch the streamed event for as little as £14 (£9 for RAD members). Access can be purchased via www.artstreamingtv.com. For more information on the Genée, visit www.rad.org.uk/genee.

Dance Informa wishes the 23 Australian dancers participating in the Genée 2015 the very best of luck! Dancers include:

Also, congratulations to Jade Charlton and Eugénie English, who have each been awarded a Darcey Bussell Genée Bursary!