If you were to look up videos of Australian dance twins Teagan and Samantha Rybka, you may find them walking across the street on their hands in complete synchronization, or perhaps doing a handstand ‘pirouette’ into a six-o’clock penché balance. They’re known as the ‘Rybka Twins’, and this jaw-dropping, dynamic dance-acro duo recently took to the streets of New York City after Teagan took top prize as the first-ever ProAm Dancer of the Year. 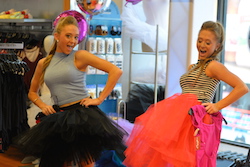 The Rybka Twins in the Capezio flagship store in New York City. Photo by Adam Housten.

This award is part of a new division of Australia and New Zealand’s Showcase National dance competition, held this past January. ProAm is awarded to a dancer, over the age of 18, who is ready to embark on his/her professional career. Teagan, 20, walked away with a prize comprised of a trip to NYC and London; a 20-class pass to Broadway Dance Center; meetings with top talent agents; a Capezio shopping spree and photo shoot; and two weeks of open classes at London studios, including Pineapple Dance Studios, Danceworks and Studio 68.

It’s no wonder that when Dance Informa met up with the twins at NYC’s Capezio flagship store, the girls were bright and cheery – thrilled with soaking up every moment of their NYC experience. The girls chatted about their healthy competition with one another, how their now-impressive flexibility did not come easily and what their favorite sights were in the Big Apple. Here, learn more about ProAm Dancer of the Year Teagan and her equally talented twin sister, Samantha.

The Rybka twins first started dancing around the age of six, although they have studied acrobatics since they were just three years old. Acrobatics continues to remain a favorite genre for the sisters, but they often fuse their acro skills with their dance technique to create unique, show-stopping routines. It was actually an acro-lyrical routine that won Teagan the first prize at the ProAm division. She performed her solo to “Footprints in the Sand” by Leona Lewis.

Teagan recalls the announcement of her win, and the incredible prizes to follow, as being somewhat of a shock.

“It was incredible,” she says. “I didn’t expect to win. It wasn’t until I actually won that I looked at what the prizes were, and that was even better! I said, ‘Whoa! That’s a lot! I actually get to do all of that?!'”

As twins who usually embark on their dance adventures together, Teagan brought along Samantha to NYC and, later, to London. In NYC, the sisters checked out many of the sights: Coney Island, the Statue of Liberty, Radio City Music Hall, Central Park and more. As part of Teagan’s ProAm prize, they ventured to the Capezio flagship store for a shopping spree, participated in a photo shoot throughout Central Park and Times Square, and spent each day at Broadway Dance Center, where they took classes such as contemporary, lyrical jazz, ballet, theatre, jazz, leaps and turns, and street jazz.

“Being able to take classes at Broadway Dance Center – that’s been one of the most incredible experiences,” Teagan says.

“Taking lots of classes and waking up really sore,” adds Samantha, of her favorite NYC activities. “I love that because that means you’ve worked hard. It’s been awesome taking class every day.” 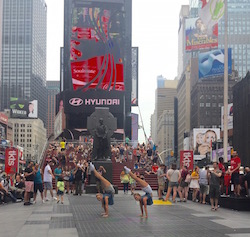 The Rybka Twins in Times Square. Photo by Adam Housten.

The Rybka twins also met with a talent agent – Lakey Wolff of CESD Talent Agency – whom offered helpful advice for their careers. The dancers currently have an acro-dance duo together and have performed it at various competitions, corporate events, dance concerts and recitals. They hope to continue to take it on the road worldwide, to as many venues as possible, and said they’d love to make an appearance on The Ellen DeGeneres Show.

Teagan and Samantha are certainly a team, and they appreciate the bond they share, both as twins and as people who dance together.

They also cannot imagine their life without dance.

“I think our lives would be rather boring,” Samantha admits. “Dance has brought us so many opportunities and experiences and stories.”

Teagan adds, “It’s like a journey. All of a sudden something else will pop up, and we’ll be like, ‘Oh, we’re doing that!’ It’s really fun.” 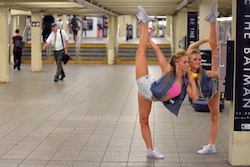 Although they have danced since a young age, the twins insist that they were not always as flexible as they are today, which is rather hard to believe considering all the acro tricks, splits and backbends that Teagan and Samantha post almost daily on Instagram and Facebook.

“Some people look at us and think that we were born more flexible, but you should watch our old videos,” Teagan says. “They’re terrible! There was a time when I would watch dancers spin and getting their legs up really high, and I wanted to be able to do that. So we stretched every day.”

“I love to share my passion with the audience,” Samantha comments, “and I love to hear when people say, ‘You inspired me to dance.’ That’s awesome.”

“We love to share our experiences, so we hope to teach as well,” Teagan adds. “We want to dance as long as we can, but in the end, that’s what we want to do – teach and share our passion with other dancers.”

To see the Rybka twins in action, check out their YouTube page www.youtube.com/user/TurningTwin.