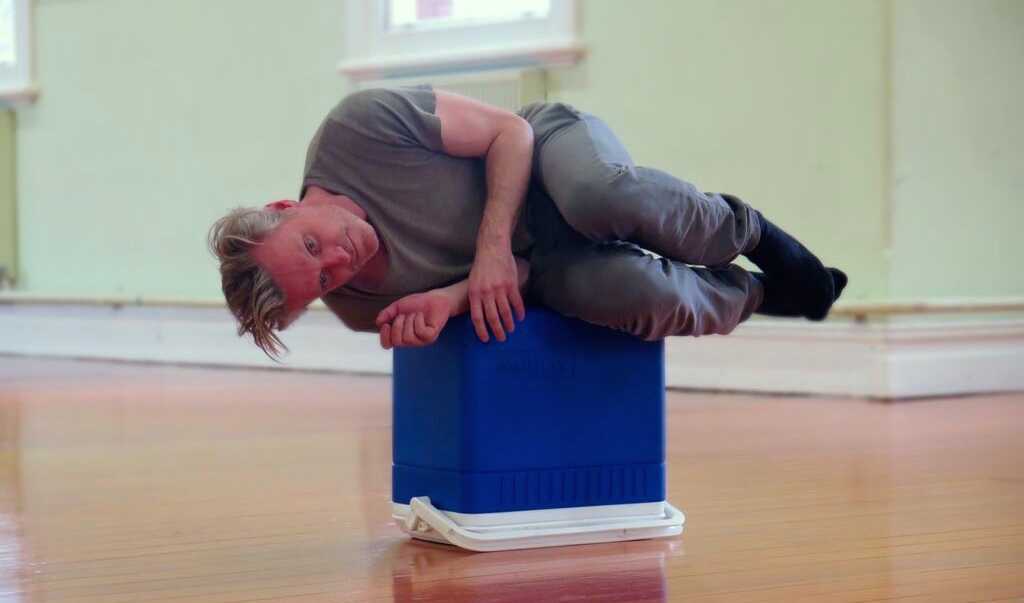 “Artistically, I always feel that the best thing I’m going to do is yet to come. I think that’s probably a good attitude to have… better than the other way around.”

I’m talking to Gerard Van Dyck, one half of KAGE Physical Theatre, about his new work, PICNIC. It’s a significant time for the choreographer/performer; a return to solo work after about a decade. 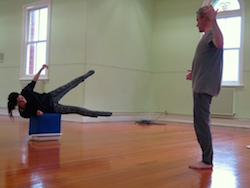 KAGE, which has been busy creating successful dance theatre works for almost twenty years, currently lives at the iconic Abbotsford Convent, a thriving arts hub just off one of Melbourne’s busiest thoroughfares. Despite the seemingly permanent rush-hour chaos of the neighbourhood, the Convent is something of a sanctuary, complete with lush, rolling gardens, historic buildings and all kinds of art being made in every corner.

At the time of our interview, Van Dyck is two days into six weeks of rehearsals for PICNIC, following an initial development in January at Wodonga’s Hothouse Theatre, part of a ‘Month in the Country’ residency.

“I’m at the stage where I have some of the plot – if you can call it that – created, and now it’s time to fill out the character and find new opportunities. It’s really exciting; it’s quite a privilege, actually, to be at the helm of a group of people working together.”

Mr. Van Dyck senior – by trade a “contract driller and explosives chief” – is helping his son to devise and construct some of the set for PICNIC. It’s a continuing tradition; he has created sets for various KAGE works, including The Collapsible Man, Nowhere Man and Look Right Through Me – a production he really “came to the party on.”

“Look Right Through Me was a monumental piece for him, because we have this massive, reinforced steel man-made tree in the space that takes the weight of dancers, swinging off it and moving around,” says Van Dyck. “Apart from the fact that it’s a bit of an engineering feat, it’s one of scale; it’s big and heavy.” 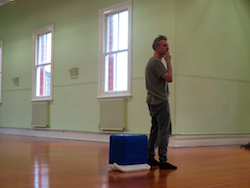 Today, though, we’re in the ‘dorm’ studio at the Convent, and the only set piece to speak of is a bright blue esky, which Van Dyck is busy finding ways to interact with.

Using the great Aussie picnic as a metaphor for happiness, the new work explores the role of the artist in society and questions why the arts are not taken seriously across the majority of this country. “I want the piece to be entertaining and I want it to be insightful, to reveal a bit about me. I’ve got a clear image of the impact I want it to make.”

PICNIC, Van Dyck says, comes from “almost a political space, and a sort of philosophical space as well.” However, the choreographer is quick to add, with his work – and with all of KAGE’s work, there is a always a sense of humour. “I have to keep reminding myself that, yes, I’m interested in exploring these things with integrity and insight but, at the same time, my schtick is a bit more on the funny side. At least I prefer to play a character which has a sense of humour.”

That lighter side is intrinsic to the style – and the raison d’etre – of KAGE as a company. Van Dyck and his professional ‘other half’ Kate Denborough, are fuelled by storytelling, social awareness and the absurd. “We want to reflect the way we see civilisation – civilised people – should behave, and that includes being silly and funny and dangerous.”

It was partially this sense of humour that drew Van Dyck to working with Marieke Hardy, a writer he calls “funny, irreverent, self-derogatory, progressive and altruistic”. Wanting to stretch himself by including a significant integration of text, he engaged Hardy to write a script for PICNIC. Living together during the ‘Month in the Country’ residency, the two became fast friends, and realised they have a lot in common, in terms of “sense of humour and the kind of things that matter.” 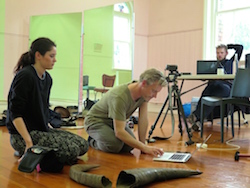 Hardy has since developed a nine-page script, with what Van Dyck calls “clear narrative standpoints, turning points, places for the character to be in.”

Delivering so much text on stage is not the only trial he’s encountering, of course. There’s also the comedic aspect; making sure people get the joke and appreciate it. “Comedy is really hard. Timing is a learned art form… or a natural one – either way, it’s a skill.” Van Dyck is also conscious of keeping it relevant, and not too indulgent, as it’s such a personal project. But it’s all these challenges that excite him, as well.

It’s not only his first solo work in some time, but his first performance; although he has of course worked on all of KAGE’s recent shows. “Performing is what I do, what I want to do and what I want to keep doing,” says Van Dyck. “And seeing as the first solo one was 14 years ago… well, I’m ready to do the next one.”

‘PICNIC’ plays at fortyfivedownstairs, Melbourne from August 18 to 30. Book here.