If it’s full body immersion you’re after, try blending the physicality of contemporary dance with the altered state soundscapes of HTRK (aka Hate Rock). Having done that, plug the resulting collaboration into the context of a weekend of ‘ecstatic potential’ and you have a truly supersensory happening. Or rather, the potential for one.

On the icy Melbourne day that Dance Informa speaks to Anouk van Dijk about Chunky Move’s upcoming new work with Australian indie darlings HTRK, the piece in question, (commissioned for the upcoming Supersense Festival), is both unnamed and largely unrehearsed. None of which appears to phase van Dijk.

Indeed, Chunky’s Artistic Director is quite relaxed about it; clearly looking forward to the challenge of working in a different way. The piece, she insists, will be more like a gig than a painstakingly constructed work of dance. “Partly improvised, partially with set components,” she explains. “We’re really surrendering to the way that music unfolds in terms of intensity. Y’know, it’s a very different collaboration to something like Complexity Of Belonging, which was very a rigorous process, like theatre. This is more like a lounge experience, I would imagine.” 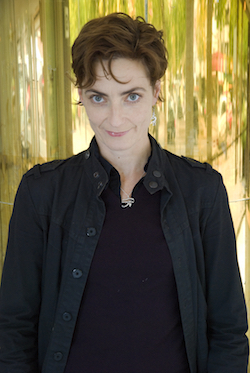 That this gloves neatly with the Supersense Festival’s experimental, experiential vibe is perhaps not entirely accidental. After all, it was the festival’s director Sophia Brous who brought Chunky Move and HTRK together in the first place. Responding to the invitation, van Dijk says, “We want to keep it really intense, and really grow out of the excitement of working together for that first time.”

On that score, HTRK certainly come to the party. Since beginning life as a trio back in 2003, HTRK have carved out a niche as purveyors of evocative electro-industrial sounds. “My interest in working with them is that they work so experientially,” van Dijk reveals. “It’s so about letting go of certain parameters and getting almost into another state.”

Here again, the Supersense Festival’s overarching theme of ‘ecstatic potential’, of exploring ritual, transformation and transcendence, is realised. Like every artist on the Supersense roster, HTRK live outside the safe confines of easy commerciality; a fact that excites Anouk van Dijk. “On one hand the music is really big and vast and on the other it’s really intimate and personal. So, since I’m a proximity freak in all my work and I love working with the sense of distance between the audience and the stage, this was really a very tempting collaboration.”

When it comes to proximity, however, it may well be the audience that has its buttons pushed on the Saturday of the festival, when Chunky Move’s three dancers and HTRK’s (now) duo take to stage. As van Dijk describes it, “Our ‘gig’ will be on the main stage of the State Theatre and the audience will be on the stage too.” There they will be treated to an amalgam of dance, live music and live video, as the performance happens amongst and around them. “It will be contained,” van Dijk adds, “but at the same time, everything will be moving, will be colour and texture and touch and breathing.”

The lack of a fourth wall in this instance not only gels with the overall Supersense ethos but smashes both dance company and rock band comfort zones. “In the music world there’s a very different way of immersing yourself in an experience,” van Dijk concludes. “It’s a time-changing event. At least, that’s my experience.”

The ‘gig’ oeuvre has, of course, informed the creative process. As van Dijk says, “We’ve gotta really depart from the music of Hate Rock, really go with that, and go really kind of velvet and thick. It’s very textural; and I’ve got very sensual dancers to respond to that.”

For audiences and performers alike, the promise and the challenge of Supersense is to embrace a kind of otherness and dare to depart. “Sometimes in rehearsals things can run that way, where the dancers really get into a state and a different place of experiencing things; and it’s going to be really interesting to bring that together with live music.”

According to Anouk van Dijk both Chunky Move and HTRK are ready to step away from their usual routines in order to make something unexpected. The question is: are you?