For those who love cheerleading squads, energetic competition, superficial life crises and high school romance, then Bring It On – The Musical is the show for you!

The producers of the show came together in December 2014 and decided to create a youth company that would provide opportunities for the next generation of young, talented and versatile performers by showcasing their work on a Sydney stage. Bring It On was indeed a display of versatility.

The cast on stage was extremely talented and adaptable, and incredibly excited to be performing. Whilst the story differs from the film, the stage version still included cheerleading stunts and technical tricks, including tossing and spinning in the air with no mats to land on. This was accompanied by opening night nerves in a live scenario, but the cast held their form in a professional manner.

The main protagonist is Campbell (played by Alex Lewtas) – a popular, leadership-driven, goal-orientated and talented blonde who has been voted in as the squad Cheer Captain. Nevertheless, nothing is ever that easy! Popularity and talent always come with their own challenges. One of Campbell’s constant trials is Skylar (Jessica Van Wyk), who probably is not only stronger in character but stronger in performance as well. The amusing, pretty and manicured character definitely added a fun and “bitchy” dynamic to the show, while on the other hand, Campbell’s interesting and rather unique boyfriend acted as the mediator of tension and always saved the day with an endearing little romantic song shared between the two. 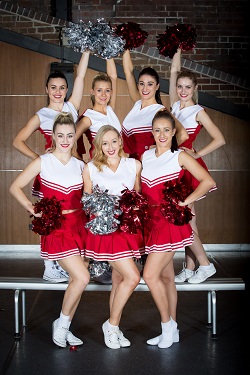 As the story progresses, Campbell is strangely removed from her conservative and preppy school life and thrown straight into downtown Jackson High. With only a hip-hop dance crew and no cheer squad, Campbell’s identity, dreams and aspirations come crashing down.

So what does a girl have to do to fit into a new school and be chosen to be in the dance crew? Especially a crew led by Danielle (Kat Hoyos), whose attitude and style clearly states her position? Well, wearing a mascot suit and dancing in front of the whole school will do the trick!

Campbell conquers (of course) but still continues to face more challenges. She learns that life doesn’t come so easy for all, and that respect and loyalty for other people is key to life and success.

Along the way, Bridget (Sophy Carol), who was young and a little unpopular, was definitely a show highlight. She was, by far, the most entertaining and believable character in the performance. She also had a thing or two to teach her seniors – that’s for sure!

As a whole, the cast gave their best. With a few more rehearsals, the performance could have been slicker, with tricks and transitions being executed in a smoother manner. Stronger breathing and stamina techniques would have increased the professionalism for opening night. However, the most important aspect was that each member of the cast appeared to be having the time of their life. And this energy was certainly evident as they interacted and engaged with one another on stage.

This show is a great opportunity to see the future stars of this nation!

Photo (top): Bring It On – The Musical. Photo courtesy of Bring It On.