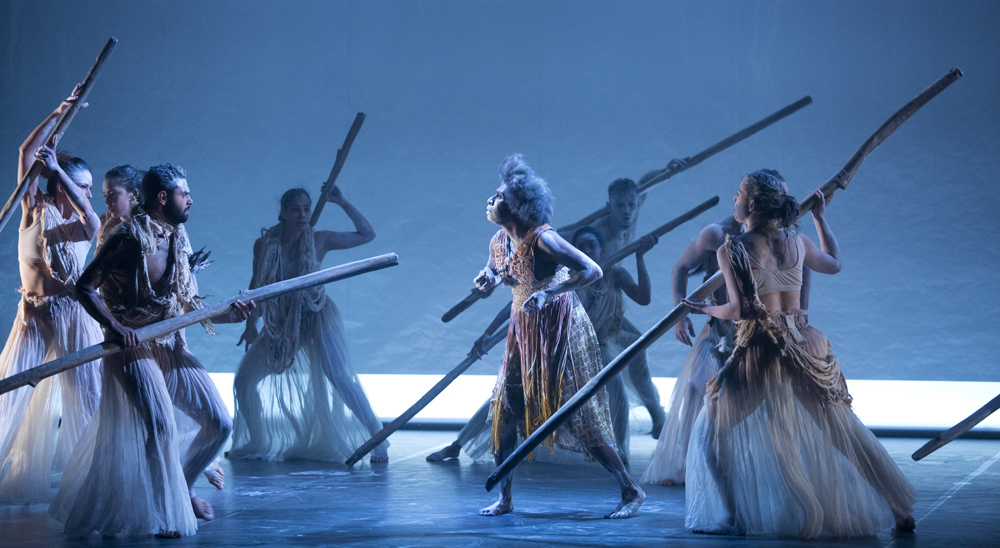 The opening work for the programme was I.B.I.S. (“Island Board of Industry Services”) choreographed by Deborah Brown and Waangenga Blanco. Exuberant, joyous and fun, it followed a day in an I.B.I.S. shop and celebrated community in a series of vignettes.

Choreographically, there were sinuous, darting movements and fluid ripples, lots of wonderful slinky manoeuvring, unusual lifts and partnering, and a demand for a very flexible back. The tropical soundscape included waves and seabirds. There was a tightly-choreographed short sequence (perhaps hints of a Meryl Tankard influence?) for a line of women with shopping baskets, which was contrasted with a very hot, sexy and steamy men’s dance.

There was also another wonderful women’s segment where they were waiting, silhouetted and stifling in the heat, sighing when the doors open and the air conditioning begins to work.

Mention must also be made of the sardine tin and turtle sequences. The stock had a secret life of its own once the store was closed. 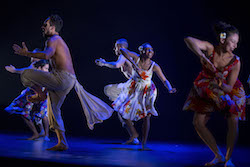 Elma Kris was featured as the shopkeeper in I.B.I.S. and then as the spirit of the Sheoak in Sheoak, the second half of the double bill choreographed by Frances Rings. Sheoak was far darker than its previous work, and emphasised the Aboriginal/Torres Straight Islander connection to the land and environment. Acting as a plea for conservation and preservation, it noted the need to protect the ancient languages, customs and lore of the indigenous peoples of Australia.

Here, Rings’ choreography was outstanding, as always. There were some unusual lifts, some challenging jumps and a wild, yet controlled, stormy atmosphere. The work opened with dancers undulating like spiders, as if under water. They were a writhing sculptural mass, perhaps of an eerie giant tree trunk at one point. At another point, a woman became like a wounded bird covered in oil. And another sequence featured a white shroud-like costume that was framed around the edges with lights that seemed at first to dance by themselves (like stars) until the dancers finally emerged from the fabric.

Sheoak concluded as the company built a lattice of branches to protect Kris, symbolising the cultural heritage under threat.

As always, Jennifer Irwin’s costumes were superb for Sheoak, ranging from almost skeletal, black-and-white body-hugging leotards to traditional outfits. I.B.I.S., on the other hand, featured women in bright, floral-printed 1950’s A-line skirts with Plumeria blossoms in their hair. Karen Norris’ lighting for both works was nuanced, dramatic and subtle.