When the Rocky Horror Show opened upstairs at the Royal Court Theatre in June 1973 its creator Richard O’Brien and original producer/director, Australian Jim Sharman, could barely have imagined that they were giving birth to a cult. Indeed, anyone who has been in a Rocky Horror film or theatre audience will know the dress-up devotion that some fans have for it.

Now, forty two years and countless revivals later, Frank N Furter’s transvestite laboratory is once again working on the creation of a muscle man with an impeccable tan.

However, even though he’s already worked on it previously in both New York and London, taking on the Rocky Horror legacy is no small challenge. “It’s sooo famous that it comes with a certain expectation, especially in London, where I did my first production of it,” Wright reveals. “The fans in London expect a certain quality with Rocky Horror because they are so passionate about it; so for the fortieth anniversary production we wanted to bring something very fresh to the show, but we also wanted to bring something very classic to it. We wanted to show the fans, ‘hey, we are keeping this show alive after forty years’.”

The other significant challenge that Wright faced this time round was an incredibly tight rehearsal window: just five days to work his magic and get the big production numbers up to speed. “It’s been incredibly intense,” he laughs. “A really crazy time.”

Fortunately for both producers and cast, Wright’s energy and expertise make such things more than do-able. Dancing since the age of six, he left home at seventeen for the glitz of Sydney. As he recalls, “I knew nothing about the industry. I knew nothing about anything but I was offered a job as singer/dancer and I thought I’d made it. I thought I would never have to do anything ever again for the rest of my life and I’d be very happy.” 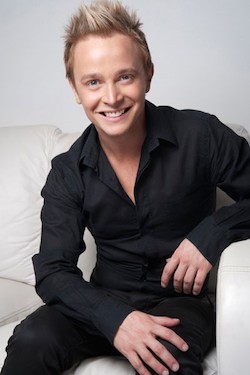 Of course, since then he’s done plenty more, from big West End and Broadway musicals to Baz Luhrmann films and huge showpiece events like the 2014 Sochi Opening Ceremony to BBC TV hits like Strictly Come Dancing.

“I always had a desire to choreograph,” he says. “I knew that’s where I’d end up, much as I love performing. So when I was in my mid-twenties I started to write to some of my friends who are choreographers in Australia saying, ‘look I would love to be your assistant if you want someone to get your coffee, clean your shoes; I’ll do anything you want’.”

It is precisely this brand of optimistic determination that Nathan M Wright brings to the plate when working on shows like Rocky Horror. “Because people expect certain things of the show I try to create sequences that are very easy to watch and very easy to learn, for people to join in with,” he elaborates. “Y’know, when all the characters come together for a number it’s an excitement. It just lights up the stage and I think that really excites an audience.”

Although content to work within the show’s traditions, Wright is always looking for ways to bring fresh invention to each production. “For me it’s absolutely about the people in the show,” he explains. “I have a very good structure of what the show is and what I want it to be, but then I try to colour it in with everyone’s talent. It’s like, everyone knows the Time Warp but I really look to create other songs, so that the audience get more than they bargain for.”

What this means is that 2015 audiences will not get a carbon copy of 2014. It’s this commitment to get past mere revivalism that has driven Wright and the cast through their intense five day dance drill. According to the choreographer, “This show is very slick and unified but it also gives our actors a chance to invent; so there’s moments where I say ‘this is what I’m after’ but I’m not going to insult you by doing literally every second of choreography for you. This is a chance for you to bring something alive.”

So, just as Frank N Furter toils to bring his man Rocky to life, so too Nathan Wright and the latest cast of the Rocky Horror Show work to keep the forty two year old cult alive and cross-dressing for yet another year.