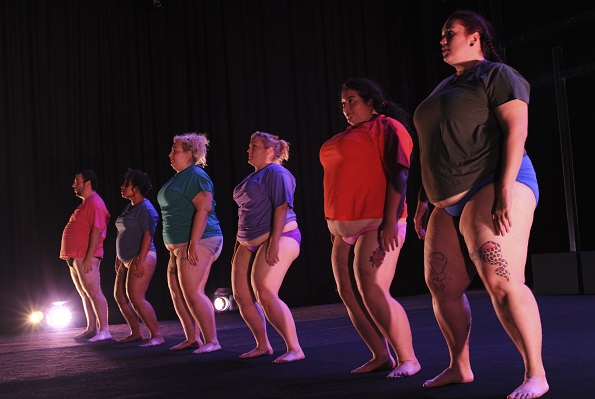 Nothing to Lose, one of the many dance/theatre offerings available as part of the prestigious Sydney Festival program, is an exploration and bold statement on the larger body and movement/theatre. It delves into a range of ideals on how larger bodies are viewed, as perceived by the creators and collaborators of the work. For Director Kate Champion, the outgoing Artistic Director of Carriageworks resident company Force Majeure, this was her final work with the ensemble in this role.

Champion’s vision was a noble one, wanting to explore movement that may be unique and specific to a larger body. As her program blurb stated, “I have been enthralled by the movement vocabulary these performers have co-devised that is genuinely custom-made to their body type.”

As an audience member, I was looking forward to seeing some amazing, unique and interesting movement and theatre that was quite different, something to inspire the choreographer and creator to think outside the box, to approach a subject matter that challenged the bounds of body stereotype in theatre. This was the buzz surrounding the casting, and seemed the original intention for the work. There were two sections that beautifully carried this intention, one that contained the main seven performers, which was a slow, mesmerising montage that seemed to just float through the space.

Champion’s intention, however, was not entirely to be the case in presentation. There was plenty of pedestrian movement, and plenty of exploring the body through grabbing and shaking of body parts. And it included audience participation, but not in a particularly artistic or choreographic sense, just a vulgar, in your face, “I dare you to say something” manner. It didn’t seem particularly theatrical; there was none of the mystery or depth that usually accompanies a theatrical production. It was laid out plainly, which seemed the main directional choice for the work. Yes, there was some movement and some creative text, but a lot of the work did not seem to be particularly the product of any great creative process. It was very sectional, and often one dimensional. There was one section of the work where two of the performers executed some very interesting choreography and the piece seemed to be beginning to evolve into choreography that would allow the audience to receive something of their own intuition, to draw their own conclusions without having the performers do the thinking for them. But this was not to last very long. It was the most intriguing section of the work.

‘Nothing to Lose’. Photo by Prudence Upton.

It would have been so empowering to the subject matter, to the performers, to the audience, to see these performers showcasing their most creative, beautiful and intriguing work, not just a literal statement, as if we were engaging with them in general conversation regarding the subject matter.

Somewhere in the process, which takes into account the performers own experiences and intentions, for their own artistic work, and perhaps this work…it seems that the original intention for the work may have gone a little awry. Champion states in the program that she had no wish to make a political work. However, this came across as a very politically driven work. An agenda was pushed, and the audience was told what their opinion was of the subject matter, or it certainly came across this way. This approach versus allowing the audience to take away whatever they happen to get from it is a choice, and a very specific directorial choice at that. Creating a piece with the assumption that your audience has a particular opinion about the subject matter makes for very pointed work. This, perhaps, would not have been a bad thing had it been presented with a more creative edge.

It was great to be confronted in such a way by the performers, but this was definitely not a “choose your own adventure” type of performance. It is a shame the clear content was not accompanied with an equal amount of artistry, to really give the subject matter not only a loud voice, but one with many layers and intonations.

The final section of the piece, a group dance with about 20 additional performers, was very fun, and did leave the work with some sense of empowerment. It was simple choreography, taking into consideration that the majority had little or no formal dance training. Ironically, this major dance section was not a collaboration but choreographed by the talented independent dance artist (although ironically smaller-bodied) Ghenoa Gela.

Photo (top): Nothing to Lose. Photo by Heidrun Lohr.