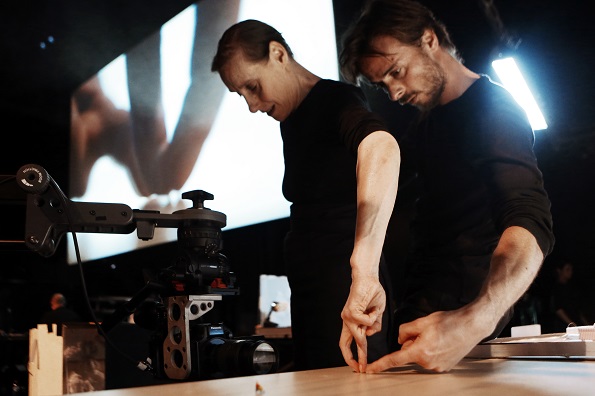 With Kiss & Cry, the Charleroi Danses bring to the 2015 Sydney Festival a dance performance unlike any other you will have seen, with an engaging take on creativity which is not solely reliant on a dancer’s individual physical virtuosity.

Kiss & Cry is a work determined to defy easy categorisation with its effortless blending of dance, drama, puppetry and live filmmaking. But rather than displaying a creative vision in a larger-than-life manner, the company forces us to concentrate, as their work unfolds in the miniature.

While dance may be determined to push the body to its virtual limits, Kiss & Cry moves in the other direction; transmitting moods and emotions through the human dancing bodies hidden in the shadows to the hands we see on screen. And what a revelation these hands can be! Their capacity to be a body in miniature and evoke a variety of characters, contexts and emotions is testament to the company’s collaborative vision.

Conceptualised by choreographer Michèle Anne de Mey and prize-winning filmmaker Jaco van Dormael, partners in life as well as on stage, Michèle Anne is known for her interest in collaborative productions, exploring the relationship between dance, theatre and music. Whilst Van Dormael has written and directed a number of both short and longer feature films with underlying themes of childhood and imagination.

With Kiss & Cry, Michèle Anne’s collaborative tendency incorporates not only a variety of multimedia and childhood memorabilia, but also lays bare the entire creative process so that as the show unfolds, the audience essentially become collaborators.

Whimsical with a strikingly sensual and emotional resonance, Kiss & Cry seeks to capture the essence of memory via the story of one woman’s seven loves. The first love lasts a mere 30 seconds on a train at the age of 12 years; the memory of which, however, lasts a lifetime and leaves an indelible print on the young girl’s mind. In Kiss & Cry, described by Michèle Anne as an “atypical show”, the main characters are portrayed by dancing hands, exploring pain, loss, and the banality of life and relationships.

With a model train as porter of the never ending flow of time, a dolls house and sand hills dotted with tiny figurines denoting the myriad of characters that pass through our lives, some leaving a trace, others forgotten, this is an enchanting and fascinating world.

This enchanting world could only emerge through the process of creative and playful collaboration. Michèle Anne explains, “Sometimes scenarios of chases in the desert, and sometimes words written by Thomas turned up and inspired us. There were three, then four, then five, then six of us…We played, we danced we filmed the tables…in an attic, lots of little worlds took shape…Working towards a constantly evolving show.”

The interplay of multimedia, two dancers, the minutiae of miniature representations (sets and models) and a number of hands-on stage hands on a stage laid bare for the audience is mesmerising. There is a screenplay, a text, choreography for hands and a musical score all working together to create a performance based on memory.

The dancing hands have the curious effect of being both enchanting and limiting in their capacity to be a living character and hence could only achieve their fullness through the interaction of lighting, stage sets and the live filming.

Rather than hiding the tools of enchantment off stage, Charleroi Danses exposes its mechanisms to the audience and hence the stage was like a construction/film site rather than a picturesque setting. This approach was both risky and immensely evocative, and reinforced the narrative that much of the enchanting and whimsical in a persons life are underpinned by the mundane repetitive interactions of people and technology.

This is not a performance for the faint-hearted… It is long and demands the audience to go on a concentrated voyage into the memory with rare moments of light relief. However, due to the entire creative process being exposed to the audience, we have the freedom to either watch the film or try to discern the details being engineered in the shadows.

The Charleroi Danses has created something completely out of the box with the enchanting and fascinating Kiss & Cry. To paraphrase the words of Michèle Anne de Mey, this performance has been one of the most wonderful collective creations I have had the pleasure to witness.