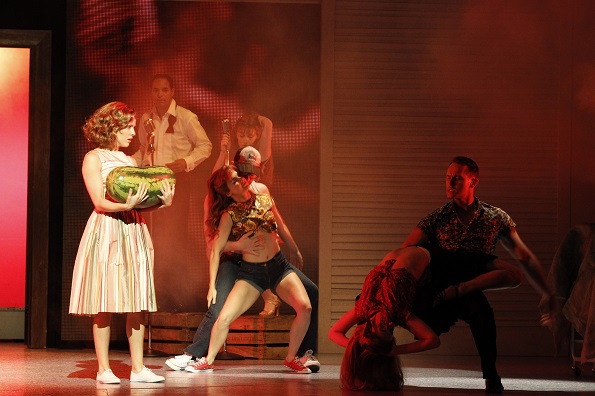 A blast from the past, Dirty Dancing – The Classic Story on Stage is so much fun. Featuring all the classic hits and scenes from the movie, this show is going to be a great hit with those who grew up trying the moves and singing the songs from the cult film. The sense of nostalgia was tangible, and from the moment one entered the theatre people were excited. So many moments throughout the show were greeted with loud applause, laughter and cheering from the audience that it was hard not to catch the infectious atmosphere.

From a technical point of view, the show fell short at times, and in other areas it shone. The performers were a mixed bag of experience and talent. Kirby Burgess as Baby was gorgeous; she worked her role superbly. Burgess was the perfect ‘awkward’ dancer and she was adorable, funny, lovable, infectious…well suited to the role. Nadia Coote as Penny Johnson also worked her role beautifully. Her long limbs and sensual style was captivating, and surprisingly well controlled for such a lengthy dancer.

Kurt Phelan as Johnny Castle seemed to be cast on his Patrick Swayze look-alike, not necessarily his dance ability.  He danced well in the partner dances, but in the moments where he danced solo, he failed to execute these technically. Mark Vincent, as Billy Kostecki, seemed to be cast on his ability to sound like the original vocal from the lead track, not his stage presence, acting ability or professional experience. Although his strong vocals really carried him through the role, his lack of focus in character let him down. Although, he really was the perfect vocal match for his role, he was a beautiful singer… as was his female counterpart, Elizabeth, played by Anna Freeland, who again sung really well, and with more stage presence than Vincent. However, her shiny makeup throughout the show was cause for distraction.

Kate Champion did a beautiful job of the choreography. At times, she gave a nice contemporary twist on certain lifts, but she also really digged into the freedom and sensuality of the time, where much social change was occurring. The young people were expressing themselves through social dances, and summer was a time to be carefree and enjoy life, with 1960’s freedom clashing with 1950’s uptightness that at times gave way to desperate breaks for something other than perfect presentation and happy home making. Social convention plays a big role in the undertones of Dirty Dancing, with writer Eleanor Bergstein’s own childhood experiences being the basis of the story. This version of the story brings in new characters, notably Tito Suarez (Eric Rasmassen), and unfolds a little more of what influenced Bergstein’s writing for the musical.

Two scenes really came alive due to the choreography and staging, “Do You Love Me” and the finale. Both of these scenes filled the stage and the atmosphere was electric. Everything about these scenes jumped out at you.  Synchronized or en mass choreography always brings a show together, moving the story along, emphasizing key moments and making the biggest impacts in any musical. There was quite a lack of this, with the atmosphere feeling quite sparse at times. There was also a lack of the characters breaking out into song, re-telling the story mostly by dialogue and band or re-mastered recorded versions of all the classic tracks.  The die-hard fans will not be disappointed since the music is a major part of Dirty Dancing fame.

For a cast somewhat inexperienced in Latino/ballroom dance styles, they worked very hard on characterizing their roles, and bringing life into their interpretation of the choreography. At times, lifts were not executed well, were clumsy and just not technically great. Plus, there were also some really awkward lines where the audience was shown just a little bit more crotch than is tasteful. Some better bloomers perhaps wardrobe? At times, dialogue was also not delivered with great timing, and the audience seemed to laugh at certain moments that perhaps were not meant to be laughed at, but more laughed with. With more rehearsal, this show will really come alive.

The biggest disappointment would have to be the signature presage lift. Instead of running into this and building a beautiful climax to the most awaited moment of the show, this came more like a deadlift, and Burgess and Phelan did not manage to hold this successfully in this particular show to make it a really strong moment and the highlight it was meant to be. Regardless, it still received amazing applause, and the audience loved this moment.

This is a young cast with much buzz and excitement about them, and if you are a die-hard Dirty Dancing fan, the live show will not disappoint. Without too much deviance from the movie, it is a great chance to relive all your favourite moments live. All the best to this wonderful cast and the team of Dirty Dancing – The Classic Story on Stage. We can be proud to call this a homegrown show, showcasing some wonderful homegrown talent.