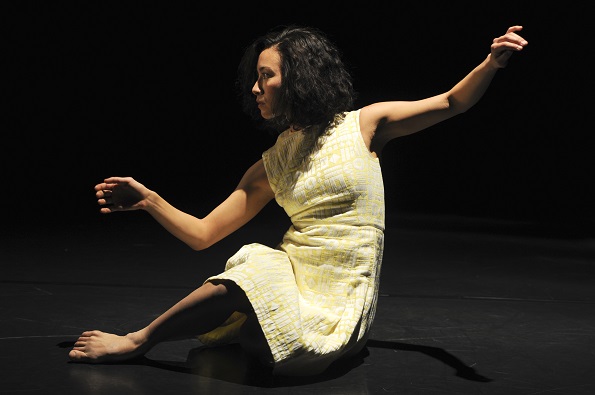 This year’s IOU season, now at Carriageworks rather than the IO Myers studio at UNSW, featured six short, very exciting works. The dancers involved in IOU3 have accumulated many years of performing experience. Having worked with major companies, directors and choreographers both internationally and locally, the artists are now developing as choreographers in their own right. Concept and performance are expressed in unexpected ways, blending a diverse display of technically demanding works that experiment with form.

The opening work by Tanya Voges, …and the pendulum, was a chilling, gripping piece inspired by an Edgar Allen Poe story. It included the use of a video screen. To the mellifluous narration by Damien Asher Voges, it utilised the actual text on the page (stop. open brackets. close bracket. exclamation mark. etc.) as if dictating basis for the movement, which was sometimes frenzied. There was incredible tension built up in the dance work and the reading. The text could possibly drown the performance, but, as I was happy to find, didn’t. Arms and bodies were swung as if they were a pendulum, and there was a lot of floor work and drawing on the special square of floor covering used. We could hear the scratch of the chalk drawing the lines as if the pendulum was approaching.

Katrina Chan’s Adrift contained powerful, hypnotic movement and at times she was eerie and spiderlike. She knelt, rolled and crawled among other movements in storm-tossed turmoil. However, the audience didn’t realise that her solo had finished, so there was no applause.

Adam Synnott and Lisa Griffiths’ Existence was a striking pas de deux, incorporating film and creating an intense, intimate atmosphere. It included some most unusual lifts and lots of rolling floor work.

Naked Habit by Timothy Ohl and Gavin Clarke used dark humour to examine the serious subject of drug addiction. For me, it was one of the least successful works, attempting to cram too much in. It included tap dancing, the spoken word, blacked up full body paint, recycled masks and a large puppet made of empty beer cans. Some of the designs were quite Cubist in style – think Picasso’s Parade. It was strange but fun.

Emily Amisano’s Between Dog and Wolf looked at the idea of transformation and was another strong, powerful and dramatic solo, with exciting swirls and full of flowing yet angular movements. It made for a very intriguing piece.

Without Concept by Craig Bary and Joshua Thomson was an audience pleaser and much fun, examining dance as an aesthetic experience. It began with them doing solos that are connected but not linked, which leads to mirroring and synchronised team work, and then there is a definite sudden mood change and a far more intimate final duo. The dancers are in casual clothes. At times, they appear to be almost boneless and the choreography demanded, among other things, very flexible lower backs and fabulous jumps.

Overall, this was a thought provoking, challenging and inspiring performance from all involved.