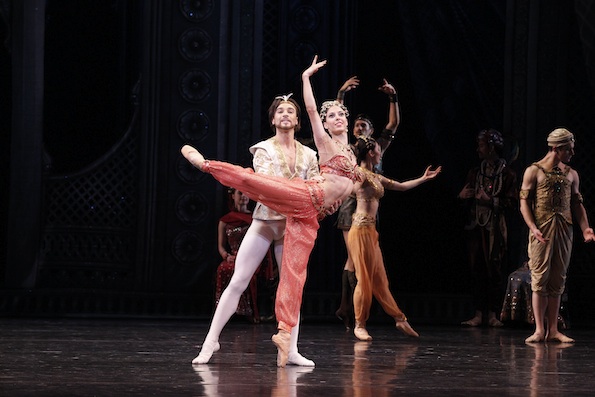 Stanton Welch’s La Bayadère is a sumptuous, exotic display of ballet prowess. It was a joy to see a ballet set in mythic India with Arabian flare, gods and sequins, all in Australia’s most famous theatre, the Sydney Opera House’s Joan Sutherland Theatre.

The tale has everything you need to keep you on the edge of your seat: love, betrayal, a dreamlike hallucinogenic world, murder and the return of revengeful spirits. What a story!

Welch’s choreography is full of Arabian lines and flair. It is mesmerizing for the audience and demanding on the dancers. Welch’s difficult, relentless choreography demands perfect technique. Occasionally there were wobbles or stumbles here and there, mainly by the corps de ballet, but generally the company gave a solid performance. The pas de deux work is inventive and challenging and a highlight of the program.

Madeleine Eastoe is a stunning, delicate and technically brilliant dancer and she was a perfect mix of naivety and beauty for the role of Nikiya. Daniel Gaudiello as Solor, Nikiya’s love interest, was strong and commanding, as always. However, I was not convinced of the love between the two. They lacked passion. They were flawless in the technically demanding and ingenious partnering and were lovely to watch, but when they danced together I didn’t gasp for air or get swept away by emotion.

Artists of The Australian Ballet in ‘La Bayadère.’ Photo by Jeff Busby.

Lana Jones as Gamzatti was the standout of the night. Her passion was palpable; she was cunning, deceptive and entrancing. Her long lines are just gorgeous. One would think she was 6 feet tall!

Jones and Gaudiello’s marriage off stage may have contributed to the lack of chemistry felt between Eastoe and Gaudiello. It was a strange choice to cast Gaudiello in the role of Solor, as he despises Gamzatti (played by his wife, Jones) and loves Nikiya (Eastoe) instead. However, I could see why Welch cast them so, as they were all perfect fits for their roles. It’s just unfortunate that Gaudiello and Eastoe lacked that spark together.

Chengwu Guo as Agni the Fire God was an explosive crowd-pleaser. His brief but powerful solo was dynamic, technically difficult and memorable. The audience was talking about it long into the interval.

La Bayadère is a unique and entertaining ballet and an exotic and fun change from the traditional fairytale stories of Cinderella, Sleeping Beauty and the like. Welch’s creation is a must see. He is an ingenious choreographer and surely one of Australia’s finest ballet exports.