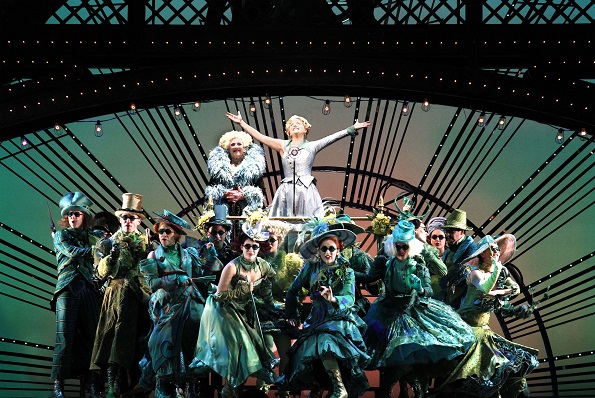 Wicked has once again taken Sydney by a spellbinding storm. Broadway’s number one hit show has been the most talked about return new musical, reaching over 97,930 Australian fans on facebook, leaving other fan pages green with envy.

Opening night in the foyer at the Capitol Theatre was buzzing as eager fans waited for the show to begin whilst they enjoyed their brightly lit green frozen “Ozmopolitans.” Finally, Elphada, played by Jemma Rix (age 29), and Glinda, played by Lucy Durack (31), returned to the stage with exuberant energy, captivating the audience from beginning to end, once again.

For those who may not have yet experienced this phenomenon, the popular musical Wicked is based on Gregory Maguire’s novel. It conveys the tale of the events that befell the world of The Wizard of Oz: this is, of course, before Dorothy and her little black dog Toto hit the scene.

Good and evil classroom and schoolyard antics transpired as both characters were introduced, clearly stating who was popular, and well, who was not. As the story unfolded, Elphaba, the guilt ridden “Wicked Witch”, enchanted the audience with her voice and powerful displays of stagecraft. Glinda, on the other hand, was most entertaining, comical and one could argue, “Legally Blonde.”

Every element was intricate and excellent, from the lead characters’ technical vocal strength and performance to the dancers’ continuous energy. The immaculate and well-designed costumes, the lighting design, all the way to the sophisticated set design and staging—all combined, enabled a framework for the story to develop and flow through shades of darkness and light, and intense energy, which drew the audience member in just before releasing them back out with carefully-timed witticisms, causing eruptions of laugher throughout the entire theatre.

Whilst Wicked was enchanting in every way, the extensive duration of the show was the only downfall. However, this did not impact the energy levels of the performers who delivered with exquisite professionalism.

The offstage friendship and respect between Jemma, the misunderstood and intellectually sound Elphada, and very beautiful and popular Ga-Linda played by Lucy was certainly evident and not only through the chemistry of their characters. Moreover, it was in the way they supported each other as artists within each other’s performance onstage.

Wicked, the must-see musical, is a show full of exceptional talent for everybody to enjoy. After all, it attracted all the Sydney ‘A Listers’ to opening night, and it was unmistakable that the cast were enjoying themselves too!