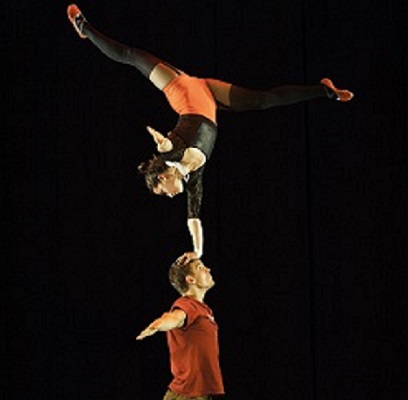 This year’s Melbourne Fringe Festival offered performances of NICA’s 7, a triptych of short pieces devised by its second-year students. The audience was treated to all that one would expect from students in a Circus Arts academy throughout the course of the night, including incredible displays of strength, people flying above your head, tumbling, balancing and a fair slice of clowning.

The first piece presented was Apartment 7 and featured chair balancing, hooping and juggling, as well as other circus conventions. The chair balancing act was a particular highlight, drawing applause from the crowd on many occasions. However, too many lighting blackouts created a disjointed feel and adversely affected continuity of the piece.

On the 7th Day was perhaps the most well-formed piece of the night, with continuous flow through the various apparatus and evolved performances throughout. A particular highlight of this piece (for this reviewer) was a comedic routine involving ping pong balls. Not to spoil it, but in the true spirit of ‘found object’ theatre, these two performers had the audience enthralled, and the act was carried through hilariously into the next performer’s piece.

After a brief intermission, the next act was #ashtag7. As you can probably tell from the title, this act deals with our society’s immersion in social media and the devices that convey it to us. A clever opening sequence which brought to mind trying to get through the city during peak hour was well done. The performers were assisted by clever and funny video projections at the rear of the stage with representations of popular social media sites scrolling past. One could not help but make a connection between the online dating section of the projections accompanying a performer on a suspended hoop routine, or ‘jumping through hoops’, to interpret a perhaps unintended metaphor.

Overall, the students of NICA put together a professional and entertaining night and I look forward to seeing what they come up with next!