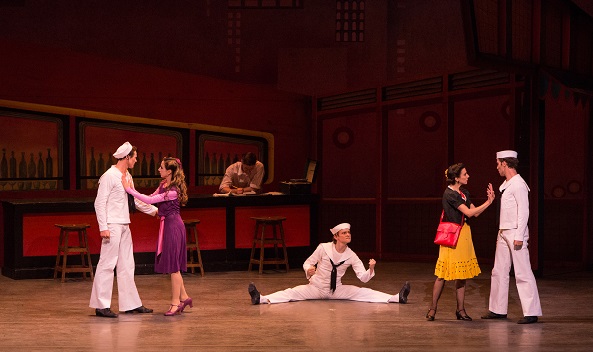 By Belinda Williamson of Dance Informa.

It was an exciting night to see the opening performance of Three Masterpieces by the world renowned American Ballet Theatre, and as a whole they did not disappoint.

Brisbane certainly is very lucky to be the only city to host ABT. Of course, a huge thank-you must go the heads of QPAC, Tourism Queensland and ABT for collaborating to bring a little bit of NYC to Brisbane.

Opening night was abuzz with anticipation and excitement with the who’s who of arts in Brisbane in attendance. The show opened with the first of the three masterpieces, Bach Partita by Twyla Tharp. This piece was revived by ABT for the first time in 28 years. The costumes were simple, yet effective, and the choreography had the potential to be amazing. I believe that this piece needed a little more time in the studio to perfect not only the choreography but the intricate pas de deux work that was a main focus of the piece. It may have been opening night jitters, but the dancers did not seem to work together as a unified core but rather as soloists who danced to their own beat. Although, Misty Copeland and Stella Abrera caught my eye with their gorgeous technique and performance. The dancers were accompanied by one lone violinist who did not falter once. After watching this piece, I hoped that the two masterpieces following it would make up for its inadequacies.

Act II began and the curtain rolled up on what only can be described as a breathtaking piece of choreography. Seven Sonatas by Alexei Ratmansky was a brilliant and inspiring piece.  The staging was simple with a grand piano and pianist accompanying the dancers. These dancers should be applauded for the sheer stamina it took to perform this piece. Simple costumes let the choreography shine through and each step was performed with precision, strength and grace. All six dancers were well rehearsed and engaged each other to create a heartfelt and emotional execution.

Fancy Free by Jerome Robbins was a fun and entertaining way to end the evening. This piece is considered by many to be the American character ballet par excellence. A ballet that took on more of a musical theatre feel, it had the audience in stitches with its comedy and story of sailors out on the town. This piece was thoroughly enjoyed by everyone and showcased each dancer’s unique talent and strengths. This was a fantastic way to finish off Three Masterpieces.

Thank you American Ballet Theatre for bringing a fresh and unique ballet program to Brisbane.