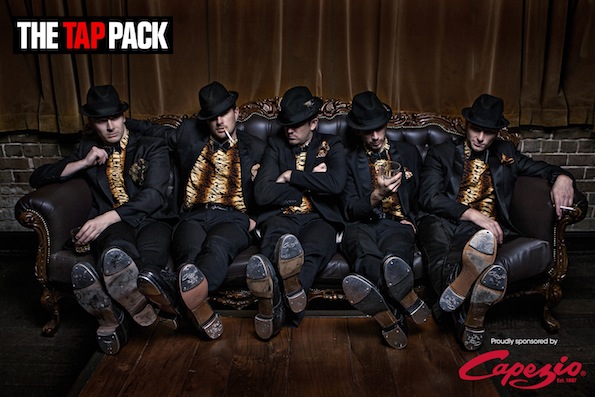 Australia’s next generation of tap dancers have combined old school coolness with fresh flair in their new show The Tap Pack. Taking inspiration from the Rat Pack and the hoofers that have gone before, co-creators Jesse Rasmussen, Jordan Pollard and Thomas J. Egan are celebrating their collective passion for tap dance in this all singing and dancing show.

I recently caught up with Jesse Rasmussen, to learn more about The Tap Pack and his love of tap dance.

Many would know you from So You Think You Can Dance Australia as a hip hop choreographer (season 3) and also a top 20 hip hop competitor (season 2). So what made you decide to develop a tap dance show?

“I’ve been tap dancing since I was ten years old in the Gold Coast. When I first started dancing I went to a studio where I did everything; jazz, tap, musical theatre, ballet and contemporary. I actually made a promise to my mum to do dancing for three months, and if I didn’t like it after three months I would give up. The first week I hated it and I was like ‘I’m never going back’, but I stuck to my promise and I’ve been doing it for twenty years now. I just love hip hop and tap dancing the most. These are my passion and the two that I’ve kept going throughout my dance career.”

You’ve been in shows such as Hot Shoe Shuffle and Tap Dogs. How has this prepared you for your own tap show?

“I was lucky enough to do Hot Shoe Shuffle when I was seventeen. It was the very first job that I ever did. I remember auditioning for David Atkins when I was still in high school and snagged the job. From then I toured around Australia for seven months and when that finished, I was lucky enough to do four other musical theatre shows pretty much back to back. I just got swept up into the whole professional dance industry really young, and got to work with so many great people along the way. I’ve actually had a blessing of a dance career. The dream was always to create a show with like minded people where we can get into a room and do what we love to do and what makes us happy, and hopefully people like it.”

Why did you decide to develop the show The Tap Pack?

“I look up to guys like Gene Kelly and Fred Astaire and I grew up watching videos of old hoofers from back in the day. So the reason why I wanted to create a show like The Tap Pack with my two buddies is because we all have the same love and passion for what came before us. There was the Rat Pack, Sammy Davis Jnr, Gregory Hines, Gene Kelly and all the greats. We want to keep their legacy alive and do what they did back then with the same flair but for today’s modern pop culture. Dance has evolved so much. We’re just trying to do something new, keep it evolving and do something great!”

You’ve talked about the greats but are there tappers here and now that inspire you?

“I definitely look up to Jason Samuels Smith, he’s a good friend of mine and I’ve had a chance to hang out with him and take a lot of his classes. I got to work with Savion Glover in the films Happy Feet 1 and 2. I think I first met Savion when I was nineteen or twenty years old, and I’d never seen a tap dancer like that live right in front of me. He really was a freak and just at another level! He was a prodigy of so many great tappers from New York, and that inspired me to take my tapping to another level. I was like ‘wow- that’s where the bar is at, and that’s where I need to start tapping and keep my skills up like that’.”

How did the idea for the show. The Tap Pack originate?

“I had done corporate gigs with Jordan and Thomas and we’ve been best buddies for a long time. The show originated from us all having the same passion for dance, and just spending time together.

One time we got asked to do a corporate job and a friend of ours said; ‘do you have a show?’ and we were like ‘yeh, we’ve got a show’. We didn’t really, but we put a performance together for this corporate gig, and from doing that we saw it being much bigger than just a five minute show. We all connected with the idea and started writing and choreographing and it was magic. We loved it.

We wrote the show with our Director and Co-Creator Nigel Turner-Carroll and he was hands on and part of the creative process. We are blessed to have an awesome team.”

Who are the guys that make up The Tap Pack and are you all triple threats (singer, dancer and actor)?

“The Tap Pack is myself, Jordan Pollard, Thomas J. Egan, and we’ve actually had a couple of guys who have come and gone over the last twelve months. We’ve got Ben Brown, and Christopher Horsey is the latest addition to the show. I love Chris and I’ve worked with him over the last ten years and I have a lot of respect for him. He played Tip in Hot Shoe Shuffle and that’s also the role that I played. I watched him on video when I was a kid, and to now work on stage with Chris is awesome.

What can audiences expect from the show?

“There’s something in it for everybody because we try to appeal to kids all the way through to senior citizens. We have a rockin’ six piece live band that comes with The Tap Pack called The Tap Pack Bandits. They’re some of Sydney’s hottest musos. We’ve got classic songs from the 1940’s and 50’s like Straighten Up and Fly Right, One for my Baby, Me and My Shadow and we’ve also mixed it with songs from Gordon Goodwin’s Big Phat Band. There’s a lot of comedy, sharp wit and dynamic dance routines. It’s such a great night out.”

Did you create all the tap choreography for the show?

“The choreography has been a collaboration between myself, Jordan and Tom. We also all work to our strengths. Jordan is a great writer and we take point on the areas that we’re strongest. I’ve done a lot of choreography over the last five years. I kind of take point in moments of the choreography, but it’s definitely a collaborative effort for sure.”

What type of tap shoes do The Tap Pack prefer and why?

“We’re sponsored by Capezio and we love Capezio. They’ve looked after us and hooked us up with the K360 tap shoe with the Tele Tone tap. They had to fly these in from overseas as they didn’t have any in Australia. They’re custom designed and we’ve got a couple of cheeky two tone colours like gold and black. We thought we’d go a little bit fancy with it because there are big finale numbers and we wanted to add some gold and glamour. We love the Capezio shoe. We wouldn’t tap in anything else.”

What advice do you have for the next generation of tap dancers?

“I would say dive into every single style for those that want to make it as an all round dancer. Don’t limit yourself, tackle jazz, hip hop and tap. YouTube and social media are so available these days to see what is going on around the world. In two seconds you can view a video of Jason Samuels Smith and be inspired in a heartbeat. Ten years ago this wasn’t available. Also practice makes perfect and never stop learning.”

What are your goals for The Tap Pack show?

“We have pretty big goals and dreams for The Tap Pack. We just presented a season at Hayes Theatre in Sydney, and next we go to Civic Theatre, Newcastle. The Tap Pack can be tailored to be a cabaret style show, a cruise ship show, a show for corporate events or even casinos. We want to take this show to Vegas and go worldwide with it.