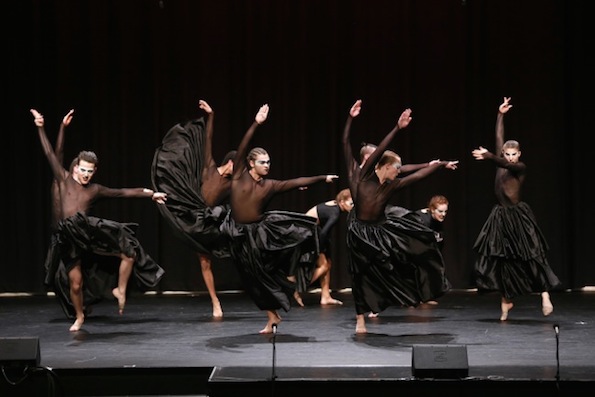 Whenever a dancer tells me that they trained at Patrick Studios Australia, I sit up a little straighter.  Todd Patrick’s Melbourne based dance studio has been training some of Australia’s strongest and most versatile performers since its inception nine years ago.  Graduates can be found on stages locally and internationally, while recent graduate Samantha Dodemaide received the $20,000 2013 Rob Guest Endowment Award.

Not only does Patrick Studios Australia (PSA) offer a number of full time courses including performing arts and musical theatre, younger students can enrol in the Elite squad which is a bridging program to the full time courses. In addition, PSA has introduced The Academy, the only program of its kind in Victoria. It is available to gifted students in years 8 to 12 who seek intensive training while continuing their VCE studies by distance education.

A student of The Academy at Patrick Studios Australia performs.

Students enrolled in The Academy train in music, drama, ballet, contemporary, jazz, hip-hop, acrobatics, acting, music theatre and body conditioning.  The Academy’s Director Courtney Allen says that the course is unique “in that it is truly multifocal.”  She states that the academic aspect of the course is given “huge support and importance” while the students work with professional teachers and have the opportunity to perform throughout the year.

Courtney keeps a close eye on a student’s academic performance, cutting back their arts classes if their grades start to slip.  The Academy ensures that students are allowed sufficient time to complete their school work and celebrates the academic achievement and improvements of students.  Courtney says that “many of the students at The Academy have come from a school environment that wasn’t suited to them, and in coming here have found a learning style and surroundings that are helping them flourish both creatively, artistically and academically.  When a student graduates from us, our goal is that they’re able to have any further education options they could want open to them.”

The high pressure of juggling academic and performance study is beneficial to students serious about forging a career in the performing arts.  Student welfare is a primary concern however, and as Courtney points out, “there are days like with any school or job that someone is tired, nursing injury or soreness and would probably fancy spending the day in their pyjamas.  It’s part of my job to keep track of this and make sure everyone is feeling ok.”  There are daily class discussions in the mornings to get the students on track and Courtney is in close contact with parents to keep on top of any issues including injuries.  She points out that The Academy fosters a close knit and supportive environment amongst both the students and staff.

Dance Informa spoke with some students for the inside word on life as a student at The Academy.

Xanthe Dunning is in Year 9 and moved to Melbourne from Queensland two years ago and joined PSA’s Elite program and is now a member of The Academy.

Leticia Mann is in Year 10 and was also part of the Elite program.  Primarily a dancer, Leticia has expanded her skill set by focussing on her singing and acting.

Students of The Academy at Patrick Studios Australia perform.

Rachel Ellis is in Year 11 and this is her first year with PSA.  Her main strength was singing and she has improved her dancing and acting at The Academy.

Stefan Lagoulis is in Year 12 and is one of The Academy’s first School Captains.  A triple threat, Stefan is an incredible dancer, actor and singer.

What is an average day like for you at The Academy?

Rachel
“An average day for me is to wake up around 7:15am. I start making my way to PSA at 8am, or some mornings earlier as I do an intense cardio class. Academic starts at 8:45am and everyone does their own independent study until 1:30pm with the help of our school teachers and our supervisors in our classroom. The performing arts component starts at 1:45pm each day. Our classes include vocal/vocal theory, drama and musical theatre. We have workshop twice a week in which we all take part in creating and workshopping for shows such as our Mid-year Showcase and End Of year Showcase. We are also involved in the elite program which includes classes such as contemporary, ballet, jazz, song and dance, lyrical, acrobatics, hip hop and tap. On Tuesdays, Thursdays and Fridays my day ends at around 4:15pm and 5pm. On Mondays and Wednesday it’s a little bit later and I leave PSA at around 8:15pm and 8:45pm. I think I speak for everyone when I say PSA is definitely a second home!”

Was it difficult leaving home in order to come to Melbourne and train at The Academy?

Xanthe Dunning performing with The Academy at PSA.

Xanthe
“At first it was hard to say goodbye but I knew if I wanted this as a career I had to move. I miss all my friends and family very much but we still keep in touch over phone and sometimes go up for a visit.”

“Academy is quite different to the Elite program. Elite is an after school program which trains you in all different styles and genres so that you get good training and can pursue what you love to do; dance and perform. But The Academy gives you the gift to not only continue your school education but also train further in what you love so that you can get a head start on your career. The Academy is half academic and half performing. After we have finished academic classes we begin arts classes which is not only dancing but acting and singing. It’s amazing to have the privilege at a young age be training to be a triple threat. The Academy is a great program as it allows me to finish and graduate at school but also perform day in and day out.”

Is it difficult managing academic studies and performance studies?

Xanthe
“At the beginning of the year it was fine but once the workload got heavier it got tricky. I find giving yourself a time limit to complete a set amount of work in really helps. Also having a plan of what to do.”

Rachel
“Adjusting to the new way of learning was not as difficult as I had anticipated! Some weeks it is challenging to keep on top of work and making sure everything is submitted on time, however our classroom is filled with support and determination which makes it easier. There are specific times a week which have been allocated during arts classes as an optional study time for the VCE students which is really helpful as it just gives some of us that extra time if we need. I am loving being able to work independently and at my own pace and I have been noticing that the results of my work have been a lot better compared to recent years. To be honest it’s really up to myself to remain organised and motivated and not let myself get behind so that I can keep enjoying the arts classes and the amazing opportunity I have been given.”

Stefan
“The way the program is set up works really well for me. Its very organized in that we know how much time we have for academic and we are given a homework hour before we start arts classes. So I find that I juggle the two a lot better than I would at a mainstream school. My grades have actually improved since being at The Academy because I have time now to complete and focus on schoolwork. Our principal is very strict with both arts and academics, so if we fall behind we are taken out of arts classes to focus on our education, which is good because then we all push and motivate each other to stay on top of our school work. We act like a team on and off the stage.”

Courtney points out the benefits of joining The Academy: “Dance students should audition for this course because they will get to improve their dancing and work with many different choreographers and teachers with a wealth of experience from around the world. The Academy is situated in the Patrick Studios building, so they will be working in the same building as the Full-time Performing Arts and Musical Theatre building. This is a great way to see the work they do and decide if full-time training is for them after they finish their VCE. Also, given the multifaceted nature of this course, they will improve their singing and acting, which is becoming more and more important in the industry. Being an all-rounder, or triple threat is what its all about!”

Entry is by appointment only and will held on Saturday 8th November 2014.