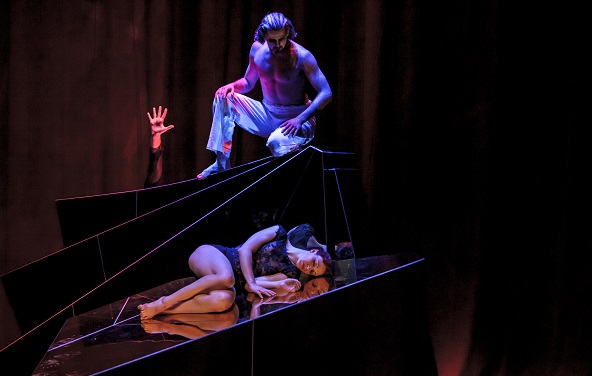 By Emi Clayton for Dance Informa.

If the element of dance was removed from this show, there is still a visual feast with Bruce McKinven’s set design of a mirrored bed. In addition to the sets, Matt Scott’s lighting design perfectly sets the mood, and blends together with Sue Healey’s original projected film which adds another level to the backdrop.

The music was brought to life by Musical Director Tania Frasier and the Southern Cross Soloists. The music was selected from 11 different classical works. It was a treat to see the musicians involved in the performance by participating on the stage with the dancers.

Elise May’s performance of Victoria was perfection. She brought experience, maturity and grace to the role. May was versatile in the demanding role of Victoria, with the dream sequence as one of my favourite pieces. Jack Ziesing’s portrayal of Victoria’s lover conveyed the character’s passion for Victoria. The pas de deux was an amazing opportunity for Ziesing to display his true strength. Natalie Allen as the older Mirror Victoria was believable, and Rebecca Hall’s interpretation of the Young Victoria’s character was conveyed with youthful desire. Benjamin Chapman and Sam Colbey’s The Weeping Angel and The Dark Angel were both brilliant performances. Daryl Brandwood’s depiction of the Director was especially sinister.

I cannot end this review without mentioning Cloudia Elder, Queensland University of Technology (QUT) student , who played the lively and vibrant Spirit of The Red Shoes. With her mature style of dance, you would think she has been a professional dancer for years, however, Elder is an EDC Trainee and a 3rd year Creative Industries student. I am overjoyed that the audience was able to see this up and coming artist in EDC, with more performances hopefully to come. I must also mention the other nine QUT Creative Industries students who performed. It is a great opportunity for these students to obtain real performance experience.

Yet again Natalie Weir has raised the bar, with another brilliant show. I am anticipating what Ms Weir has in store for EDC in the future.