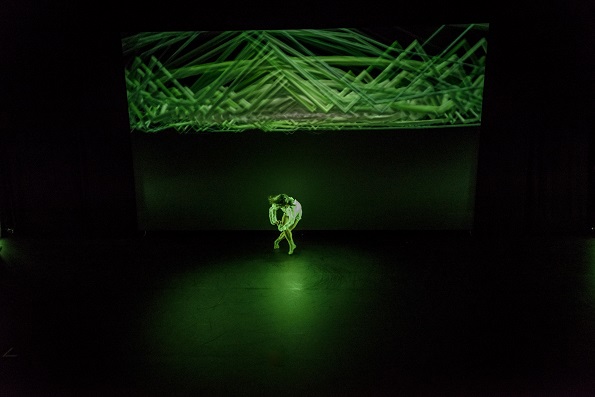 Multiverse, conceived and directed by Garry Stewart and produced in conjunction with a team of 3D animators at Melbourne’s Deakin University, is a work in which concept development and performance are integrated in a way that reinforces the idea of the work’s subject matter powerfully. In other words, the why and the how of it are at least as important as one-another. This is entirely appropriate for a work built upon a scientific idea that is about contradiction: synchronicity and tension at the same time. Whether one regards this dissonance as a fault of the piece or its strength, will probably depend upon how comfortable one is with the notion of uncertainty.

In the performance notes, Stewart claims that Multiverse began as “an investigation into String Theory, which represents the most current thinking in the area of theoretical physics and is the most likely candidate as a ‘theory of everything’ as it seems to bridge the gulf between Quantum Mechanics and Einstein’s Theory of Relativity.” He has taken this fascination, one that has been with him since he was a teenager, and attempted to represent its wondrous, daunting complexity.

The framing of the piece, while complicated in theory (and evidently challenging on a technical level), is simple in terms of its mode of delivery. Upon entering the space, audience members are issued 3D glasses, as they are then presented with a series of mesmerizing digital animation sequences, below which and among which the dancers alternately intervene, interact, and are manipulated. The virtual objects and environments are almost entirely abstract and presented without explanation, by turns allowing the audience freedom of interpretation and an occasionally frustrating lack of context.

Multiverse’s human element works hard to evoke the tension of the confused, questing physical form lost in a theoretical space. Young and vital dancers Samantha Hines, Matte Roffe, and Kimball Wong contort their supple, defined forms in precise synchronization with the multi-coloured wave forms and prisms above, behind and among them. They are clad in form-fitting white bodysuits that hint at science-fiction apparel, and upon which are projected yet more patterns of coruscating light. In the spirit of the piece, one is left with the question as to whether Wong, Roffe, and Hines’ violent gesticulations are efforts to control and manipulate the play of light about them, or to break free of its oppressive gravity. Or are they both? Are the dancers controllers or controlled? Observers or observed?

Multiverse’s music supports the visuals and lays down an appropriately rhythmic, pulsating bed of sonic momentum, although the mix of simulated biorhythms and synth-pop extended notes that hearken back to Vangelis is certainly nothing new. There were times when the suffocating embrace of sound and vision left me queasy. But one could argue that it was the queasiness of one reviewer’s existential crisis in the face of indecipherably alien signals. Part of the point? Maybe…

Dazzled by its ambitious visual assault and challenged by the uneasy integration of graphic projections and bodies in motion, I cannot help the feeling that when Multiverse works, it works in a compelling way, and when it doesn’t work, its confusing missteps only serve to make its point more powerfully. So is this awkward fit between digital art and human movement a frustrated attempt to align two visual concepts that are an aesthetic bad marriage, or is it Stewart’s insightful way of playing out the meeting of Quantum Mechanics’ square peg with Relativity Theory’s round hole?

While I found the recent reading I have done on Quantum Theory helpful in translating some of the spinning, collapsing, and gyrating forms in front of me, I imagine they might have spoken a little less clearly to the less initiated. But once again, is this denial of the comfort of certainty all part of the message? Is the bombardment of elusive observations without a safe frame of reference the way a scientist views the mysteries of space and time? For the most part, all I have are questions. But (and I suspect Stewart would be gratified by this), they are fascinating questions, even in the face of an unresponsive cosmos.