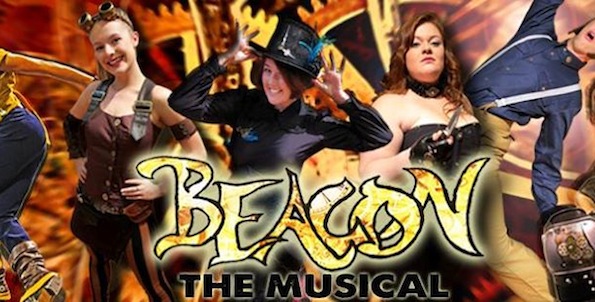 Dance Informa recently caught up with the creators of Beacon The Musical, a new tap musical set to premiere this month in the Guild Theatre at Melbourne University’s Union House in Parkville, VIC.

Creators Kricket Forster and Winston Morrison took turns sharing what to expect from this new musical.

What is Beacon The Musical about?

Winston Morrison
“The show presents a world that has lost its beat. The people who inhabit this world called ‘Botica’ lack the ability to express themselves. Therefore, their souls are weak and vulnerable to a creature called ‘The Scavenger,’ which consumes people who are weak of soul. An enlightened messenger named ‘Beacon’ travels through the universe trying to build peoples’ souls back up. Beacon has made it his mission to save people from the desolating effects of this creature by teaching them how to find their inner rhythm and express themselves.

Once people find fulfilment and are energised through rhythm and self-expression, they will have the strength to not fall prey to the relentless Scavenger. The audience gets to witness the journey of how the world of Botica deals with this and experience their ups and downs.”

How did it all start and where did the idea come from?

Morrison
“Prior to 2008, I had wanted to create a show that was iconic and told a great story. I also love tap dance and knew a show would be great publicity for the art form and the industry. I had a few ideas of interesting situations but I had not developed a story.

One of the dancers from our Melbourne Tap Dance group, Kricket, saw a video that I had submitted for a movie documentary in 2012 where one of the things I mentioned was to create a show. Kricket also shared the same passion for creating something and after a few talks, had come up with an entire story and fully written script! It combined everything I loved. There was nothing left to do but to bring this to life. We had a talented cast of performers in the Melbourne Tap Dance group and they could already do our style of tap. They also had qualities perfect for the roles in the script so we started creating and rehearsing pretty quickly.”

Kricket Forster
“I had always wanted to write a new story-driven show for tap dance, but hadn’t ever had a real opportunity for producing one. When I realised Winston had a similar vision, I realised that the day had arrived! Winston had an idea about a city that had no rhythm, which I loved, but it was a difficult concept to portray effectively.

This lead me to conceive characters living in another world who had simply lost touch with their rhythm, which is what they need in order to be complete and strong in their soul. I then developed their characters and injected tension with the threat of an evil force that would terrorise people with weak souls.”

How did you choose the story?

Forster
“I had many elements of dance and theatre that I wanted to combine and work into a way that made sense for a broad range of people and age groups. I also love fantasy fiction, and setting the story in another world allowed me to perfectly incorporate all the science-fiction elements that I wanted in the musical.”

Where is the story set?

Forster
“The bulk of our story takes place in a realm adjacent to our own, called Botica. It is a place where technology is advanced yet their style has a beautiful old aesthetic similar to that of the Industrial Revolution. In this world, there are cyborgs (people with robotic body parts) and people who can travel from realm to realm using teleportation goggles!”

What makes this show different from others?

Morrison
“Many tap dance shows are a routine showcase; there are few that draw people in with a good story. This one does, which is why I’m so excited! Our style of tap dancing is also different than the general public’s idea of what tap dancing can be. It is very powerful and soulful, and visually and rhythmically dynamic. People always comment after our performances how they’ve never seen tap like this before.”

What will audiences get or feel from seeing Beacon The Musical?

Forster
“Audiences will feel invigorated and inspired for having joined our characters on their journey of self-discovery. People will also get to see a style of tap dance that isn’t too often seen on Australian stages with a lot of the African American roots of tap in our choreography.”

Morrison
“Audiences will get to experience another world and see the transformation of people as they shift from feeling empty inside to being enlivened and uplifted through rhythm. Through the story, there will be heart-wrenching moments of loss and vulnerability to moments of comedy, as well as the big energetic song and dance numbers featuring tap dancing that will inspire.”

Who is the show best suited to?

Morrison
“It is a family-friendly show; the message is positive. If you like dance and a good story, come along!”

What has been the highlight of putting this together?

Forster
“For me, the highlight was working with Winston to create music to go with the lyrics and melodies I had come up with for songs in the show. I explained the feeling, motivation and purpose behind each song to him and he brilliantly converted this into amazing music.”

Morrison
“For me, it was first reading the script. It combined many elements perfectly. Creating the music was another fun part, and resulted in many all-night sessions. Announcing the musical publicly with the images that Kricket created, brought it to life.

Finally, with our Director David Clisby, who brings 40 years of experience in this industry, the show and characters have been lifted to another level on stage through his genius directing and coaching.”

What do you see for the future of the show?

Forster
“I wrote this show to suit many scales of production. I can see this show on tour in regional and metropolitan areas. Beacon has the potential to enchant, so I can see it reaching many audiences!”

Morrison
“In the short term, after our opening premiere in Melbourne, I want to tour it in regional areas for a few months.  I would also like to do it in schools if it is logistically possible, as I think it is a great message for them to hear.  Beyond that, I would love to do seasons at major theatres. I want this musical as well known and iconic as shows like Tap Dogs and Bring in ‘da Noise Bring in ‘da Funk. These shows were revolutionary in giving the public a refreshed image of tap and saw resurgence in the art form all around the world.”

WANT TO SEE THE SHOW?
When: Friday, June 13 and Saturday, June 14 in three performances only.
Where: Guild Theatre, 1st Floor of Melbourne University’s Union House at Union Road, Parkville, VIC
Tickets: $25 to $30