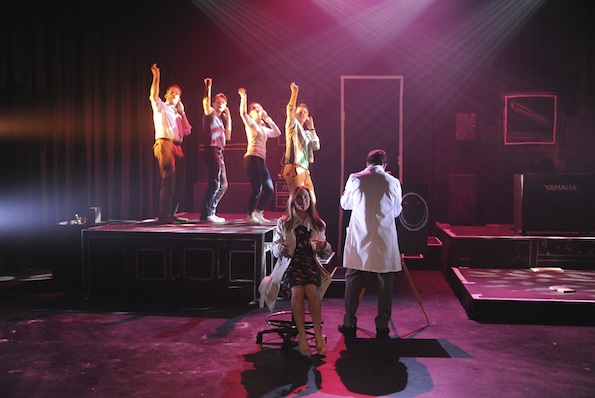 Let’s get one thing clear – this is not a show that is full of dance or extensively choreographed numbers. However, it does use movement very cleverly and is an exquisite example of small independent theatre getting it so right, which is why this production of the Pulitzer Prize and Tony Award-winning show Next To Normal needs to be brought to your attention.

A musical whose main storyline is dealing with grief and mental illness? From its synopsis this doesn’t immediately jump out as a show that would be witty, clever or lighthearted. However, it is all of these things, and after a close and respected friend suggested this was one of the best shows she had seen on Broadway, a trip to Geelong (of all places) was deemed necessary to see Next To Normal at the Geelong Performing Arts Centre. It was well worth it. Before revealing why, let’s take a little look at the industry in Australia.

Whether big or small, dance or drama, in Australia it is very difficult to get a new show produced, and even harder to get a new Australian show produced. Is this due to a fundamental lack of support? We readily support sports with backing, sponsorship, funding and massive audiences. Unlike many other countries, Australia doesn’t have a culture of support for the arts.

What America and the UK do so much better is start small. They premiere a show in a small town to get audience reactions and feedback. Then they move to a slightly bigger city before they even consider a leap to a harsh, fickle and critical environment, which Broadway and the West End can be. We only hear about the finished, polished, final product, often forgetting about the long road it took to become the latest and greatest international hit musical we see once it reaches our shores.

When a musical is successful, it means big business with massive (but risky) potential for profit. The Phantom of the Opera is the highest-grossing example of entertainment of all time (higher than any film), but, as mentioned, the risks are even greater (King Kong cost approximately $30 million and hasn’t made nearly that back). This means that local producers are reticent to take risks on new works. They would rather invest in productions that have had overseas success.

Smaller organisations across Australia are taking control of their careers, realising that in order to be successful, new shows have to play to smaller audiences who are passionate about theatre. Who will turn up to every performance and tell everyone they know to go because these shows are clever, unique and intimate? Companies like the new Hayes Theatre Company in Sydney and Doorstep Arts in Melbourne.

Which brings us back to Next to Normal produced by Darylin Ramondo for Doorstep Arts. This production was a complete surprise: full of energy, honesty, nuance and emotion.

The story revolves around what initially appears to be a regular, loving family – the caring Dad (named Dan, played by Mark Dickinson), a Mum struggling to cope (named Diana, played by Natalie O’Donnell), and two teenage kids, Natalie (played by Kiane O’Farrell) and Gabe (played by Brent Trotter). The character of Diana wrestles with anxieties and delusions that threaten to tear her life to shreds and the rest of the family is left to cope in their own ways. From recognition to medication to therapy, the family’s emotional battle is so beautifully captured in this musical. From acerbic wit to heartfelt confessions to tearful acceptance, this show has found the perfect balance. The music, written and composed by Brian Yorkey and Tom Kitt, is clever and articulate with a modern perspective whilst also being emotionally revealing and authentic.

To gain some insight from one of the pioneers of independent Australian theatre, I spoke to Darylin Ramondo the day after the final show. She shared her background, the history of Doorstep Arts and her aims for the future of this fantastic production of Next To Normal.

When Doorstep first began, there was a gap in youth theatre companies so that became the initial focus. It started as Doorstep Productions with Natalie O’Donnell, the lead in this production, being one of the first young performers Ramondo trained. The company, as it is now, evolved over time into the original dream. It obviously nurtured and grew those kids as many of them, who began training with Ramondo, have come back to work with the professional company. One of her incredible and beautiful success stories is Amy Lehpamer (Dirty Rotten Scoundrels, Rock of Ages), and a great supporter of Doorstep is Eddie Perfect (Shane Warne – The Musical, Offspring).

Looking for a project to sink her teeth into, Ramondo was recommended Next To Normal. She heard the music and fell in love with it. This show has been the baby of Ramondo and O’Donnell from the start. With an obvious passion for theatre and the people in the theatre, it is no surprise to discover that Ramondo has a passion for shows with deeper content, hence that attraction to this show.

This show requires the cast to reveal honest and vulnerable emotions whilst also singing and dancing. During the rehearsal period, the cast shared their own personal experiences in order to work collaboratively to create the poignant and moving show that it is now. As director, Ramondo created a safe place for the actors to experiment, be vulnerable and real, but without wallowing in the content of the show. The pace of the show is constantly moving through wave after wave of emotion, all while keeping the humour present. As a result, the audience was able to connect with their own deep emotions of loss and grief.

The set is very simple and is created using chalk to great effect, resulting in a lovely background with the intense emotional content. In order to come up with this concept, Ramondo consulted with her dear friend and well-known actor Jolyon James. Through discussion and collaboration, they developed the concept as a means of bringing their audience into the world of the characters. The use of chalk clarified the character Diana’s thoughts, with the ability to delete or smear the chalk through various stages of the show, to highlight the effects of her mental state. The concept became an integral part of the storytelling… simple, minimalist and effective. It was a conscious connection between therapy and telling this story.

The production had a very limited run with only eight performances in total. This was due to GPAC’s availability. Despite the short season, much of Ramondo’s own money was invested in the show, so it needed to break even. To demonstrate just how nail-biting producing a show is, on opening night they had only sold 300 seats for the whole season. Starting a show with this few ticket sales in Sydney would make investors consider cancelling. However, due to hugely positive word-of-mouth and glowing reviews, they sold 1100 tickets in six days, another testament to the quality of the show. In the last two to three days, they sold 300 tickets! Which, you can imagine, as a producer is very scary. So every time Ramondo does a show she takes a massive personal risk.

Ramondo believes Australia does musical theatre extremely well. She said, “There are some great original works, especially by smaller independent theatre companies, as well as beautifully realised remounts of well-known music theatre being performed across the country.”

As mentioned before, she also recognises the incredible array of talent and ingenuity in this country with our talent in great demand all over the world. When asked about Baz Luhrmann, she said, “I can’t wait to see what Baz Luhrmann brings us with his stage version of Strictly Ballroom. I think Australian music theatre is in great shape, but it is an incredibly hard slog as an independent theatre company to take the high risks involved in producing good music theatre with very little financial support.”

I’m very glad to see that Ramondo and many other artists still continue to strive to be the best they can by participating in and creating passionate, innovative, successful and sometimes not so successful, works as part of the rich tapestry of Australian theatre.

Next to Normal is confronting at times, but it’s also comforting and uplifting in its own distinctive way. This production deserves to be seen by a wider audience and will hopefully make plans to tour. So stay tuned to see it at a small and intimate venue near you.

“Next to Normal” played eight shows at GPAC’s Drama Theatre in March 2014. For more information on Doorstep Arts and the future of its production of “Next To Normal,” visit www.doorsteparts.com/theatre.

Photos: Performers in Next To Normal. Photos courtesy of Darylin Ramondo of Doorstep Arts.