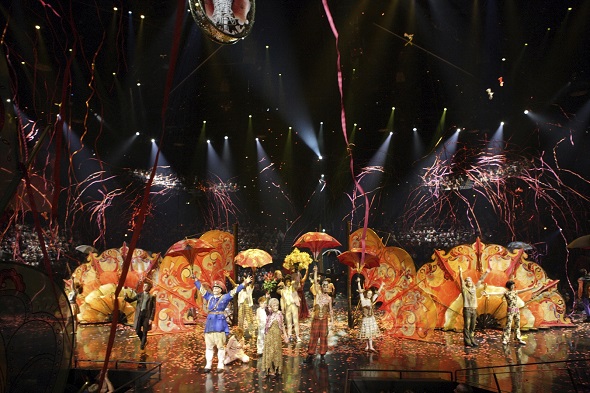 LOVE is part of a new generation of Cirque du Soleil shows.

This show was absolutely amazing!  It portrayed a well-known story of a band and an era told in a really beautiful montage of uber creativity.  There is a creative maturity with this show not seen in the original style of Cirque shows.  Those shows are also outstanding, and are what made the world fall in love with Cirque in the first place, however, LOVE took things to a whole new level.  It told a story that all of us who have ever listened to the Beatles, or lived through the 60s and 70s would be able to relate to.  If they could have been there, the Beatles would probably be very proud to play this show.  It is a fantastic homage to the era, the band, their experiences, and what they stood for and a great snap shot of wartime 60s & 70s.

So much symbolism and meaning was put into the detail of the costumes, individual characters, segues, props and choreography, it was hard to observe and digest it all in one sitting.  LOVE was almost a musical in its style of presentation. The characters vocalised, danced and acted their way through, telling the story of the war, social issues of the time, all represented through brilliantly remastered versions of The Beatles more famous tracks.  Not much of the makeup or costumes were in the usual Cirque fantasy style, but rather a beautifully crafted, colourful representation of the era.  And if you know the stories of the Beatles personal lives, part of these were woven into moments in the telling too.

A refreshing approach that made this production stand out was the structure.  The show was not based around the circus tricks, but the tricks based around the story, and blended seamlessly as layers into the telling of the story.  It was not a case of watching similar tricks as seen in some of the other shows, and the show being segmented by the tricks, but they complimented and blended with the intention and subject matter for each scene, and the production as a whole.  This show was a very respectful nod to the iconic band, the era, and what they stood for.  The smallest details and symbolism in the costumes, the way the tricks were placed and executed, all lent to the whole production being moulded around the one goal of showcasing the music and the story; a refreshing approach for Cirque.

The soundtrack is remastered versions of the iconic Beatles music, driving the story.  In typical Cirque fashion, there are those narrative type characters who continue to appear as threads throughout the show, but again the transitions we saw these characters go through throughout the work lent itself to the telling of the story. The beautiful thing about this, particularly in LOVE, was that anyone who lived through the 60s and early 70s would be able to relate to and find familiarity in the symbolism, and would be able to find a character or a thread-line that they would be able to relate to.

The dancers have their chance to feature in this production.  The choreography was generally authentic to the era, with a little Cirque quirkiness added, and there were plenty of full dance scenes to be seen. The dancers also really embodied the nuances of the dance style of the era.  It was very exciting to see so many dance scenes in a Cirque production. The whole cast was choreographed well, especially in regards to the scene transitions and story-telling, which allowed for more of the story to be shown, and give the show a fuller feel.

One notable dance scene was the rendition of ‘Something’, with a male dancer on the ground with four female dancers on bungee harnesses swinging on and off the stage over the audience. The choreography interacted so beautifully with the male dancer, using the bungee to create a dream like scene as the females just escaped his grasp.  The dancers performed actual dance vocabulary, with some able to really showcase their skills as dancers and the scene was absolutely stunning.

The creative team must be congratulated for their choices in the evolution of Cirque du Soleil for LOVE. It is very refreshing to see, and I look forward to seeing more of the newer shows.  For a while, Cirque was feeling like an experience of once you see one show, you’ve seen them all.  Not so with LOVE.  It seems Cirque du Soleil knows when to move from known formulas and morph and grow with the times.  Beautiful! Congratulations to the creative team and the performers.