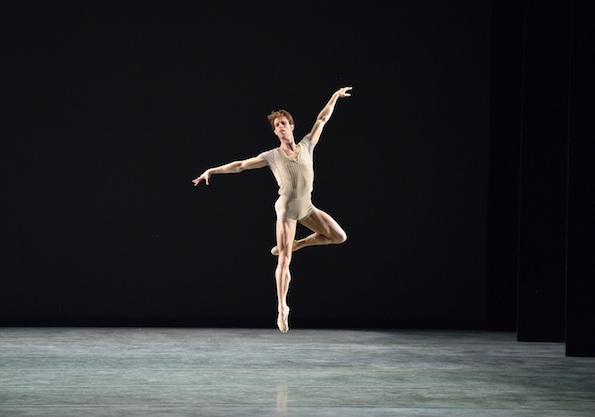 In celebration of the American Ballet Theatre’s 75th Anniversary, ballet’s elite David McAllister (Artistic Director of The Australian Ballet), Kevin McKenzie (Artistic Director of American Ballet Theatre) and ABT Principal Dancers Gillian Murphy and James Whiteside joined together with friends of the ballet for an exclusive evening at Sydney’s Establishment on Tuesday, March 4.

Dance Informa was lucky enough to attend the exclusive event and chat with ABT Principal Dancer James Whiteside. Here, Whiteside shares about his experiences touring around the world with ABT, who his artistic idols were growing up and his advice to young dancers.

What was your first impression when you arrived in Australia?

“My first thought was ‘Thank God it is warm.’ New York is frigid right now and it just about snows every other day.”

Is this your first time to Australia?

“Yes, this is my first time and we have been doing a whirlwind press tour to promote the upcoming tour to Brisbane, which is really exciting.”

You have just completed a tour in Japan, how long were you there for?

“Our tour in Japan was for two weeks and we were in Tokyo, Biwako and Hyogo. We performed Manon choreographed by Kenneth MacMillan and The Nutcracker by Alexei Ratmansky. We also danced two gala programmes with several pas de deux, George Balanchine’s Theme and Variations and Alexei Ratmansky’s Piano Concerto Number One.”

What is on the slate for your time here in Australia?

“In Brisbane we will do Swan Lake, one of the most famous ballets of all time. We will also be doing a mixed program of three masterpieces. These include Jerome Robbins’ Fancy Free, Ratmansky’s Seven Sonatas and Twyla Tharp’s Bach Partita.”

Which one of these are your favourite?

“Oh, that is so difficult as they are all so different. They are all kind of like the greatest hits of ballet. Swan Lake really brings forth the classicism of ballet, whereas our mixed bill gives us a taste of every genre. We have modern, contemporary, jazz you know, and therefore, loads of different styles going on there, which is great.”

Aside from classical ballet, what other styles of dance do you enjoy?

“I really enjoy jazz. So, while I am here in Australia I will be dancing Prince Siegfried in Swan Lake. I will also be doing Bach Partita and Fancy Free, which is quite jazzy and set in 1940’s New York City. It’s about three sailors on shore leave and they meet two women, and there in lies the problem…”

“This Australian tour and set of performances will mark the beginning of our 75th Anniversary. To think that American Ballet Theatre has never visited Australia in all this time is preposterous! I can’t think of a better way to kick off this relationship than to bring a brilliant set of ballets here.”

The fact that it has taken 75 years is quite phenomenal, isn’t it?

“It’s madness. However, Brisbanes’ reputation for the arts and performances, not to mention the weather, has really made the company excited about coming here later in the year. This will be a historical moment and we are bringing about 130-140 people.”

American Ballet Theatre is rather iconic in the dance world in general, and Kevin had spoken about the dancers, such as Mikhail Baryshnikov, and choreographers that had contributed to the company’s style. Do you feel this style has continued to evolve since you started?

“I feel like ABT is very true to its ideals. As a kid, American Ballet Theatre had always been a dream of mine. And whilst I feel like the company continues to evolve in repertoire, the mission remains the same.”

How do you feel your style has contributed to the company?

“For me, it is really important to be versatile. So I have loads of different styles under my belt and I think that’s important in today’s ballet world.”

Do you find that versatility is a very common trait in American dance?

“In my opinion, as America has such a mix of training and backgrounds, you have to be able to adapt to different repertoire. Otherwise you don’t do it, and I want to dance everything!”

What is your favourite historical aspect of American Ballet Theatre?

“I think my favourite part of ABT’s history is the ability to persevere and create incredible art in circumstances that can be difficult. In addition to this, it’s the incredible artists that have changed the game essentially. I think that is the legacy that ABT will leave behind and the legacy that follows its art and performances.”

Have you had the opportunity to be involved in any Hollywood films?

“Oh yeah, I danced in a Disney film called the Game Plan and it was fun. They were long days with a lot of standing around on set.”

Do you enjoy the big screen production environment?

“Of course I do! It also pays fabulously. So sign me up! Nevertheless, as far as my craft, the stage is where I belong.”

What is your most memorable moment on tour or overseas in a particular country?

“One of my favourite things is to see how the audience reacts in different cultures. So, we were just in Japan, and they were so polite during the performance with their applause. In contrast, in New York they hoot and holler and stand up. So the Japanese people are very reserved in their appreciation until the very end of the performance. We were doing our curtain calls and you’d hear this great crescendo of applause that would go on for ages. Surprisingly you think, ‘Wow, they really did like the show.’ Meanwhile, you have been dancing for three hours thinking they disliked it. [Laughs.]”

How is the audience reaction different in countries such as Italy and Spain?

“They are quite rowdy actually. Which I love! I adore that sort of instant gratification, being an American. [Laughs.]”

Is that type of reaction distracting for you whilst you are dancing?

“No, not at all, I mean it is distracting in a fuelling way. You feel this inspiration to keep giving the audience a fabulous performance as you get this incredible energy from them that can’t be rehearsed.”

Who were your artistic idols growing up that harnessed a great energy?

“When I was younger, I did a lot of jazz, tap and acrobatics. I was greatly inspired by Janet Jackson and her style. When I transitioned into ballet, I was completely blown away by Rudolf Nureyev and Mikhail Baryshnikov. As I grew to learn about ABT, I would come into the city and make sure I’d get to see Marcelo Gomez when he was performing, because he is one of my favourite artists of all time.”

Being fuelled by such inspiration and having such a diverse background, do you aspire to follow Kevin’s footsteps in becoming the artistic director of ABT one day?

“Ever since I joined the ballet company that has been in my mind. That is something that really interests me. I love the idea of bringing my creative vision to life and to hopefully push the boundaries of what a ballet company is. But, that is a while away, so fingers crossed. I have many more years in me!”

What is one quote that you live by to remain inspired and keep persevering?

For those aspiring to follow the footsteps of your career, what words of advice would you offer them?

“Dance because you love it! And don’t let little things limit you.”

Thank you so much for your time, it’s been a pleasure and I look forward to the show.

“I look forward to coming back!”

American Ballet Theatre will be performing exclusively in Brisbane at Queensland Performing Arts Centre from August 28 to September 7. For more information and tickets visit www.qpac.com.au.