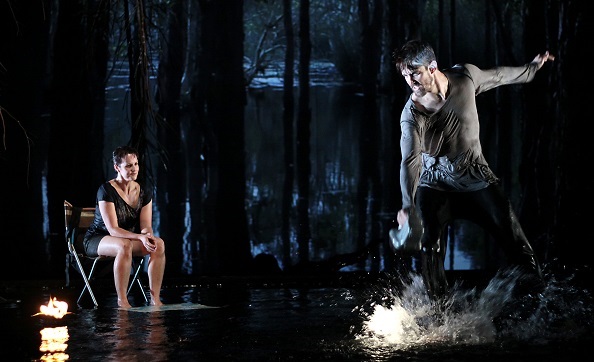 Independent dance artist Lisa Wilson’s critically acclaimed production of Lake is touring nationally from March to May, supported by the Australia Council and Performing Lines.  In addition to performances of Lake, Wilson will be presenting masterclasses at the 2014 Australian Youth Dance Festival in South Australia.

Wilson has been working as a director, choreographer, performer and educator in Australia and overseas for more than 20 years.  Recently she has been nominated for a 2013 Australian Dance Award for Outstanding Achievement in Independent Dance, and has a new production in the works which will combine dance, music, design and on-stage technology.

Tell us about your dance background and training.

“I am a Brisbane girl who actually got involved in dance through gymnastics. I then started my dance training at Viviane Sayers Dance Academy, moving onto QDSE and QUT.

My first professional job after graduating was with Dance North where I stayed for five years, before moving to London where I freelanced for another five years. On returning to Australia I joined Expressions Dance Company for a period of six years before leaving to have my first baby! Around this time my focus shifted to choreography and in 2010 I premiered my first full-length work at Brisbane Powerhouse. Since then I have been fortunate to have been commissioned and work with many companies across theatre, opera and dance. My second full length work, Lake is now about to tour nationally to seventeen venues.”

A scene from Lisa Wilson’s ‘Lake’.

Your career has spanned over 20 years and you’ve worked with a vast amount of artists and companies including The Australian Ballet and Sydney Dance Company. What have been some highlights of your career so far?

“Both of my full-length independent works are a highlight, as these works are created over a number of years, through a few development stages and many funding applications. Creating works for both the Australian Ballet and Sydney Dance Company was such a thrill and I’ve also really enjoyed the challenges of working across art forms with companies such as Queensland Theatre Company and Opera Queensland.”

Have you found much difference between the local dance scene and the dance scene overseas?

“There is obviously a greater population in places like London, which offers greater diversity and volume of work being produced. I did enjoy going and seeing so much dance and theatre whilst I lived there, but what you quickly realise is the quality is not always great and really we have such incredible artists and companies here in Australia.”

Tell us about Lake…

“Lake premiered in 2012 at the Judith Wright Centre of Contemporary Arts, who are our co-producers. In two weeks time will head off on a 17 venue national tour through Performing Lines, as a Road Work tour, which is an initiative of the Australia Council for the Arts.

My inspiration for Lake came while on a family camping holiday. I started thinking about what a work would look and feel like that was based at an Australian lake. The extremes of intense beauty, yet chilling isolation, the stillness and solitude and primal undercurrents of what lies submerged? It led me to think about using water as a metaphor for human emotion and what happens when we break the surface tension of a relationship and dredge up what lies beneath.”

A scene from Lisa Wilson’s ‘Lake’. Photo by Fen-Lan Chuang.

How does the support of Australia Council and Performing Lines assist you with staging and touring your work?

“Lake was chosen by a consortium of venues from around Australia who belong to an initiative of the Australia Council, called Road Work. This initiative is delivered through Performing Lines who are an incredibly experienced and professional producing and touring organization. Road Work is committed to engaging audiences across Australia with contemporary, original and challenging new Australian work.”

You’ve received a further grant to develop WIRELESS. Can we get the inside scoop on that work?

“WIRELESS is a new inter-media dance theatre work about trust, privacy and control in collaboration with composer Paul Charlier, layering dance, music, design and on-stage interactive technology.  The work is being developed with the Judith Wright Centre of Contemporary Arts through Fresh Ground.

The first stage development, drawing on John Locke’s Eavesdropping: An Intimate History, brought out thematic ideas around the idea of privacy, which as an idea in our society is quite young, and only started when we began building walls around ourselves.

WIRELESS uses existing applications on mobile phones held by and attached to dancers to create and control an accompanying musical score, translating this data into an aural environment, which gives a physical presence to the radio waves that surround us, through which we communicate and the dancers interact.

For all tour dates for Lake visit http://performinglines.org.au/productions/lake/