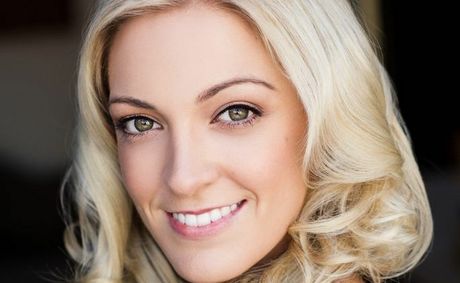 When I first spy Gretel Scarlett, she is standing in the foyer of Moat Cafe, pre-styled for her evening performance. She is the vision of Grease The Musical’s Sandy — the ubiquitous blonde good-girl — a role she has been playing since July last year. We are just a few blocks from Her Majesty’s Theatre, where the Gordon Frost Organisation’s Australian tour of Grease The Musical is currently based, which is just as well because Gretel will need to dash off in an hour to prepare. But after ordering two glasses of juice and seating ourselves in the dimly-lit hallway of the cafe, all of that seems far off as we discuss the highs and lows of performing life that led her to Sandy.

How did you find out you had been cast as Sandy last year?

“I actually didn’t go in auditioning for Sandy, I went in to audition for a part in the ensemble as a pink lady — I thought they’d already cast Sandy or at least had somebody in mind that they’d want to lead the show. So I just went in there as myself, dressed in a cardigan and a skirt, so a bit like a nice fifties sort of girl, I suppose. As the auditions continued, they just kept calling me back for Sandy stuff and I realised, ‘Oh God, they’re seeing me for Sandy!’”

“In the very final audition when I was reading opposite Rob Mills [who plays Danny], the producer – from the UK — said to me, ‘I don’t want you to be Sandy or try to be what you think is Sandy, because people try to play her as dumb. She’s not a dumb girl, she’s an intelligent girl.’ Then he stopped and said, ‘She’s actually you.’ The rest is history.”

When did the casting committee first recognise the chemistry between you and your ‘Danny’?

“I was the last of the Sandy ‘potentials’ to read with Rob Mills [who plays Danny]. I’d met Rob outside of the audition, but only a couple of times and this was our first time working together. We were reading away and I just…it was his eyes I think. I was just drawn to his eyes. He was just looking at me and in my head I was like ‘la la la,’ somewhere off with the fairies. I almost forgot my lines.”

“I just saw the whole producing team sort of gently lean forward out of their chairs and when we got to the end of the scene, they just said ‘Thank you’ kind of dreamily. They just sort of sat there and I just shook my head and sighed. They asked me why I was shaking my head and I said, ‘Oh, it was just…his eyes…I almost forgot my lines because of his eyes…’ and they went ‘Okay, thanks for that’ rather thoughtfully. Apparently when we all left the room they all looked at each other and said, ‘That’s them.’ And now Rob and I are great friends, so that definitely really helps the chemistry on stage.”

As a dancer/singer, has performing in musicals always been your end goal?

“Yes, I think so, looking back. I would’ve been about 12 when I remember the people at my school asking me ‘What do you want to do in your life?’ and I said ‘I want to go to WAAPA and I’m going to do music theatre.’ And they said, ‘What’s WAAPA?’ They had no idea. So I had it in my head from an early age. I grew up doing all facets of dance —ballet, tap, jazz, contemporary —which led into song and dance, and I’ve basically just tied them all together.”

“When I moved to Sydney at the age of 15 though, I was offered a full-time ballet scholarship at Alegria Dance Studios, which took me in quite a different direction. I thought ‘Oh, maybe I’m meant to be a ballerina, maybe that’s what this is calling for me to do.’ That year I broke down, I had injuries and I re-assessed my whole life, but as devastating and disappointing as that year was though, it made me believe in myself again. In hindsight, I think I was meant to do that year of full-time in order to work out that that was not what I wanted. I found that I wasn’t happy just standing at the barre. I was too loud. I wanted to chat and hang off the barre like a monkey! It drove my teachers insane, but I figured myself out. It all put me back on track with that 12-year-old girl.”

Have you found dance a good base for a career in musicals?

“Yes, absolutely. My personal opinion is that dance makes you highly employable. The minute you walk into an audition, those in charge of casting will be thinking ‘Oh, there’s a dancer.’ If you’re the right style for the show, you’ll make it through that initial dance call. Then they’ll get to hear you sing, and if you’re the right kind of singer, you’ll be a step above everyone. On the flip side, the singer/actors, they have to really work hard in the audition to make the directors notice, they really have to try and sell themselves in other ways to get through the initial dance call. So I think it’s helped me, definitely.”

Amidst all the singing and dancing, you also managed to slip in a year of study in nuclear medicine. How did you end up doing that?

“While I was studying full-time ballet in Sydney, I found myself in a lot of pain for about eight months and I had no idea what was going on. The school sent me for some bone scans. While I was sitting there getting the scans done, I started asking the girl there all these questions ‘So what do you do?’ ‘What do you mean?’ ‘How do you read this?’ They diagnosed me with stress fractures in my tibias in the end.”

“That day I learnt all about the imaging and, I don’t know, something in me just went ‘Maybe you want to learn a bit of that?’ I’ve always loved anatomy and physiology. So after I graduated high school, I decided to go and study nuclear medicine, the field tied to those bone scans.”

“After a year though, I started to want to sing and dance again. [Laughs.] It always comes back!”

What have been the toughest aspects of the industry for you as a performer?

“Being a dancer and a singer, I was always the understudy in every musical, so I think the toughest aspect for me personally was always being the understudy and not having the chance to have a role to myself. I never cared about people watching me as an understudy, I was always respectful in that regard, but I wanted to be able to go out there and do eight shows a week to challenge myself and make myself better. That’s actually why I said no to returning to the Wicked ensemble. I did Wicked for two years so I picked up all the understudy roles during that time, and I guess a part of me was just ready to be a supporting character or something more than an understudy. It was a huge risk to take, but I think that’s what I needed to do at the time.”

“Collectively as an industry I think one of the biggest hurdles for us is rejection. It’s hearing that ‘No’ – I think that’s something a lot of people find it hard to get over. After the first dance call for Grease, the beautiful choreographer from the UK—I was so glad he did this because there were a lot of young girls in this call — he said to everyone ‘Thank you so much for dancing your hearts out, you’re all fantastic and you all worked so hard. However, we are casting a show here and we are casting roles. You may not, for example, be a Rizzo, but we need three other girls in the ensemble to play Rizzo if in the event that Rizzo is sick. That means we need girls who could either sing the part, look the part or dance the part on top of doing an ensemble track, and you just might not fit in.’ After he said that you saw this relief wash over people because he put it into context, that rejection is not necessarily saying ‘You’re terrible, don’t come back’, but simply that you don’t fit our vision for the show.”

Is being a part of the industry harder these days? What is something that you think students sometimes don’t factor in when thinking about a career in music theatre?

“Once upon a time we had 10 graduates entering the industry each year from the one music theatre course in Australia at WAAPA. You’d probably also lose about 10 people a year as people grow older, have families and move away. Now though we’ve got many more certificates in the various performing arts as well as music theatre, and many more institutions, so it’s all adding up. The shows might last six months or only six weeks, and our contracts are signed for Run-of-the-Play only, not on a yearly basis.”

“Although we as performers can’t do much about it, I think people need to know so they don’t walk out with a degree and think, ‘I’m good. I have a degree so I’m going to get a job.’ You can be in the biggest musical in Australia like King Kong, but when it closes, what do you do next? My advice would be to think about other ways you can use your skill base and maybe complement it, say with a DipEd, because everyone needs to pay the bills between jobs. The plan B is not about thinking, ‘What if I don’t make it?’ Because you can make it, but when that show closes, well, you’ll still be going nuts for a month. It’s just not a stable industry. So I personally think everyone should have a plan B. It’s a beautiful industry, it’s just very limited.”

For more information on Grease The Musical or to purchase tickets, visit http://premier.ticketek.com.au/shows/show.aspx?sh=GREASE14.