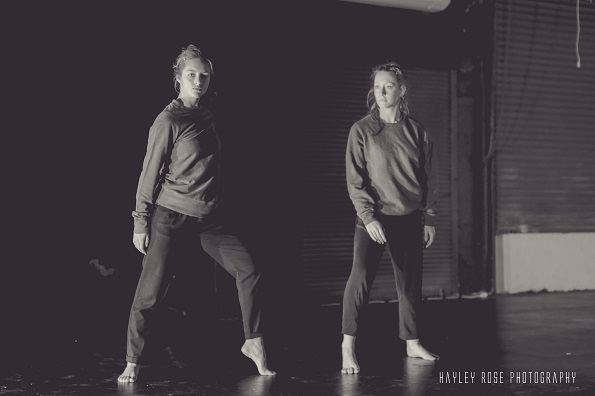 DirtyFeet presented two very different, exciting works in development on the cutting edge of contemporary dance. The black box studio of the Shopfront Theatre was extremely effectively used; cramped and busy in In Transit and coolly a precisely in What It Is.

A frenetic, possibly overly busy piece at times, In Transit, choreographed by Sarah-Vyne Vassallo, took as its theme the fact that life is full of constant changes, choices, directions and opportunities that all create a cause and effect. It began with a couple with a huge map of the world discussing where they could go. Then there was a seething, rolling, sculptural mass across a single hand held light that loomed in the dark. Another slightly later section used the rhythm and repetition of ‘hello’ and ‘goodbye’ with the performance space divided into four lanes with large red and yellow caution roadwork barricades. The area was even further divided later with the use of barricade tape.

In a couple of wonderful pas de deux there were some unusual lifts and partnering. Massaria had a terrific intensely dramatic solo utilizing a chair and shadows. Bunton had an anxious, angry solo trapped inside a square of the barricades, trying to escape. It was all about pathways of change and the cast at certain points would scurry to shift the barricades in various positions. There was a terrific enfolding pas de deux for Massaria and Tyquin which began with a Michaelangelo – like finger touching. It was bathed in golden light – was he ‘drawing’ the movement? Everyday speech was included as were ordinary daily movements and clapping.

What It Is, the second work after a short interval, asked how much do we need to define what we are doing in order to be able do it? The three marvelous dancers were dressed in casual dance pants and tops. At one point each of them removed one top layer of clothing. McCredie’s challenging choreography included everyday movements mixed with intricate multi-layered dance.

The beginning was like a slowly writhing vertical sculpture. Overall for me the work had a sort of Cunningham or McGregor-like feel. The dancers were like shop mannequins, neutrally staring at the audience, observing us looking at them.

Again the full space of the theatre was used. Sometimes the dancers were extremely close to the audience, for other sections (divided by a snappy blackout) they were as far away as possible. The work, performed in silence, played with time, structure and number  sequences could be changed in their running order if desired. Movements were repeated or tried a different way. There was a backwards tilt (demanding a wonderful use of a very flexible back), a section of repeated hand movements, rhythmic fists and shaking legs section, marching, a bounce-and–wobble sequence, and arms fluidly waving and shaking in another section. The final part had a far more relaxed, calmer feel yet was still very intense, with softer arms and the use of isolated movements. The three ended up on the floor again. Neibling’s lighting for this work, especially for the second half, was dark and dramatic and there was very effective use of shadows.