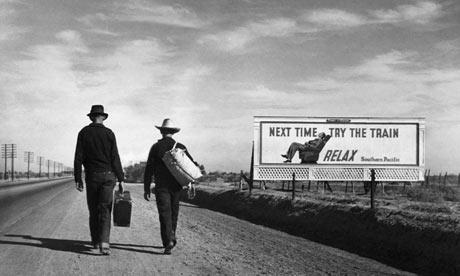 What happens when a big Scotsman and a slender Aussie decide to turn classic literature into a touring dance show?

There is something beautiful about symmetry – from quantum mathematics to the geometric splendour of a Billy Forsyth piece – so when we find a work that draws together multiple strands of creative, geographic and historic connection, it’s hard not to be impressed. Thus it is with Andy Howitt and Tim Podesta’s inspired two hander Of Mice & Men.

To fully appreciate the inherent symmetries you need to know something of the back story; and that begins in Scotland in 1785 with the revered poet Robbie Burns. It is from his verse, To A Mouse, On Turning Her Up In Her Nest With The Plough that the American Nobel Prize-winning author John Steinbeck found the title for his famous 1937 novella. Burns famously wrote: The best laid schemes o’ mice an’ men gang aft agley, which Steinbeck used as the start point for his then controversial tale of two itinerant farm labourers searching and scheming for their dreams.

That Andy Howitt, the CEO of Ausdance Victoria, is both Scottish and a longtime fan of Steinbeck’s book is the most obvious connection. The more subtle and more beautiful symmetry is that Howitt and Australia-born Tim Podesta will mirror the travelling lifestyle of the book’s heroes George and Lennie by touring Of Mice & Men regionally by literally carrying the entire production (set, costumes, etc.) in their kit bags.

“It will be slung over our shoulders and it will go with us anywhere we need to be,” Howitt explains. “So many men to this day still move from farm to farm labouring. That’s part of what makes [the work] so relevant to do in the regions. It’s about the world they know, which is not something you can often say about doing dance works in the country.”

For Australian Ballet-trained dancer and the creator of Wodonga-based PROJECTion Dance, Tim Podesta, the piece also plays with pre-conceived ideas about the kind of work that itinerant labourers do and the kind of men they are meant to be. “Two men doing a dance show and then touring it around regional Australia; y’know, that’s a pretty weird idea in some contexts or communities,” he says with a grin.

That said, the inspiration for the work began on the other side of the world, in Andy Howitt’s native Scotland. “It was one of those books that I so remember reading when I was young and I’ve kinda always thought that it would make a fabulous dance-theatre, physical-theatre piece. So, I kinda left it on the backburner for a long period of time, like you do, but I always felt that I would like to play Lennie, cause I’m a pretty large kinda guy. In fact, someone once called me ‘sensitively violent’, so it just seemed to fit.”

Soon after he was appointed CEO of Ausdance Victoria, Howitt took the three-hour train ride from Melbourne to Wodonga and there, quite by chance, he met Podesta. “I’ve always said that the minute I found the right person to play George I would ask them if they wanted to do it. So, on the train back to Melbourne after the meeting I suddenly thought I’d ask Tim.”

Although chance and history have played their part, both Howitt and Podesta have taken a very deliberate approach to structuring Of Mice & Men. Indeed, their focus is on the regions and on creating accessible work that is easy to tour and, as Howitt insists, “can be performed almost anywhere.”

Set to the sparse and brilliant Ry Cooder soundtrack for the Palm d’Or-winning film Paris, Texas, and with very minimal sets and simple costumes, the work will premiere in Wodonga in April before trekking south to Geelong and back up to Wangaratta. Indeed, there are even plans to tour the work in Europe.

The point here is the regions; and specifically bringing quality work to regions. “It’s a very difficult thing to approach and to deal with because there are so many what-ifs,” Howitt admits. “But you have to try. It’s about knowing what work works.”

Here, Podesta picks up the point. “It’s imperative; not just that work comes to the regions but that it’s produced in the regions,” he argues. “That to me is particularly where we’re lacking at the moment. There’s lot of creative energy that comes from regional Australia but, y’know, it tends to get dragged almost inevitably into the cities.”

The so-called city/country divide is perhaps even more evident in the dance world, where dance is often considered either elitist (ballet or contemporary) or strongly urban (hip-hop or krumping). As Podesta says, “Y’know, it’s about performers and directors really getting out into the community and changing that perception of what dancers and creative people are like.”

As someone who grew up outside the big cities, Howitt was directly inspired by a touring show. “I come from a small town in regional Scotland and I remember seeing my first dance show and thinking, ‘Well, that’s it’. Now if that company had not toured regionally I would not be here in Victoria taking my own show out to the regions.”

With all this symmetry and connection whirling around them, the big hope for Howitt and Podesta is that their plans for Of Mice & Men do not go as far astray as George and Lennie’s.