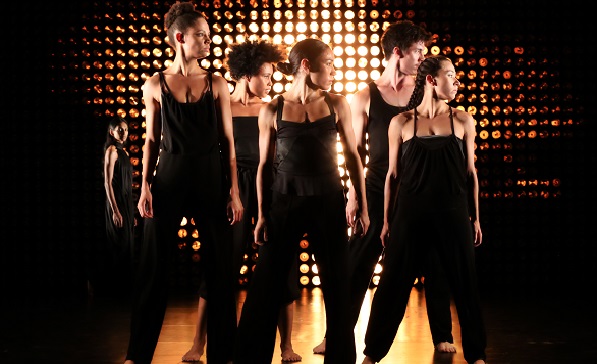 Audiences familiar with Shaun Parker’s earlier works, Happy as Larry and upbeat ensemble The Yard, may be confounded with his current production Am I which is a meditation on the nature of the sources and shapers of individual identity.

Am I is more than a dance performance; it is a creative spectacle combining an unexpected mix of narration, martial art moves and props, choristers/musicians and various collaborations leading us on a fascinating and engrossing study on ‘what it means to identify ourselves as I’.

Parkers raises questions; “Am I my culture? Am I my faith? Am I my genetic material? Am I a random cosmological consequence?” Those expecting the performance to highlight and examine individual characters are instead confronted by a work that is almost nameless and devoid of self-conscious characters, suggesting that identities are shaped more by genetic makeup and social structures rather than individual consciousness.

Using the age-old tool of storytelling we are drawn into the scientific reality of what it is to be human by the child-like/muse beauty narrator Shantala Shivalingappa. With mystical Asian arm and hand movements she beguiles and fascinates us with our own existence.

While the choreography itself is in many ways depersonalized, linear and geometric with dancer interaction often precise and regimented, Parker’s use of the narrator and a simple story-telling structure allows the audience to feel intimately connected.

There is a raw tribal feel to the dance, bereft of conflict as the small troupe of dancers combine to highlight the human need for connectivity through the formation and reformation of geometric shapes. It appears as if the dancers are explaining the scientific origins of our tribe using a strange but mesmerizing language of mythology. The intimacy maintained between performers and the audience is due to us being witnesses or voyeurs of something deep and very personal – our shared human experience.

The sets and dance movements are mesmerizing, weaving around us in ever-closer circles. With his walled panel of light bulbs as a backdrop, Parker uses it to cast shadows, create patterned geometric shapes and even momentarily blind the audience with one powerful burst as if in a moment of sun at high noon. 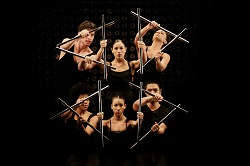 Shaun Parker’s ‘Am I’. Photo by Prudence Upton

The lack of individualism in the choreography contrasts sharply with the striking diversity of the troupe, culturally and physically. This is not a performance of personality and distinctive character but dance depersonalized. And yet the physical and kinetic difference of each dancer is somehow highlighted through the regimental precision of their movements.

In Am I, Parker again embraces the risk of incorporating non-trained dancers, just as he did in The Yard. This time, rather than teenage school students debuting on stage, Parker places Julian Wong centre stage after initially auditioning as a cellist. Arriving at the audition with martial arts poles and the ability to use them as a martial artist, Parker decided to incorporate both Wong as a performer and metal rods into the choreography.

Parker sees these rods as a sign not just of man’s development but also of man as a tool and they also serve to create an array of varied geometric shapes in the hands of the performers, alluding to our cellular make-up – same basic DNA structure with a never-ending array of permutations.

Nick Wales continues to create music that is intriguing and completely fitting…this time drawing inspiration from ancient Armenian songs as he attempts to ‘…blur the musical song lines between old, new, east and west….’ ‘I am attracted to their ethereal quality which somehow sits between Western and Middle Eastern scales.’  The music with its varieties of percussion creates a tribal and ethereal spiritual atmosphere that counterpoints the scientific precision of the dancers.

One might say that Parker’s vision is overly scientific and anti-humanist and we might not agree that human identity remains consistent through time and place with the primary shapers not those linked to self reflection but those that come from our biology and social norms.

Even if one disagrees with his conclusions one can’t help but applaud Parker’s preparedness to challenge the audience’s ideas of identity; his creative use of contrast, and his willingness to risk working with a variety of collaborators and not just refined dancers.

As part of the 2014 Sydney Festival lineup, this new production by Shaun Parker is a strong indicator of Australia’s continuing dance creativity and the power of collaboration, going beyond the expected boundaries.

With Am I, Australian choreographer and dancer Shaun Parker reinforces his presence and recognition as one of Australia’s most innovative contemporary dance makers.

Photo (top): Am I. Photo by Prudence Upton.